A video has been viewed hundreds of times in social media posts that claim it shows an actual train running from China to Europe as part of the former's massive infrastructure push under its trillion-dollar Belt and Road Initiative. But the video in fact shows computer-generated imagery; it had previously been shared in an account that frequently posts train simulations.

The video was published on Douyin, the Chinese version of TikTok, on December 8.

Its simplified Chinese caption translates in part as: "Do you think this is a game? No! This is a special train sent from China to Europe on the Belt and Road Initiative. There are more than one hundred carriages.

"Unexpectedly, when the train makes a turn, a spectacular scenery unfolds. And this is characteristic of Chinese infrastructure." 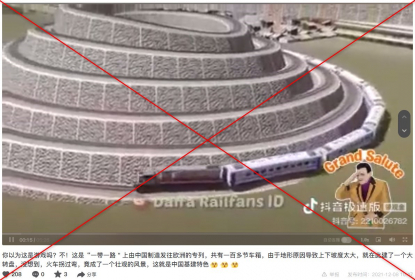 A screenshot taken on December 13, 2021 of the misleading post.

The Belt and Road Initiative is a development strategy by the Chinese government which involves a massive infrastructure push to link China to several regions in the world.

An identical video was also viewed more than 1,400 times on Douyin, the Chinese version of TikTok, and on Facebook with a similar claim.

Some social media users appeared to believe the image showed a genuine train.

"The power of China", one wrote.

"Isn't this spectacular?" said another.

But the video shows a computer-generated imagery of a train -- not a real one China built for Belt and Road.

A reverse image search on Google found the same video published here on YouTube on September 21, 2021.

The channel's description states: "Daffa Railfans ID is a train channel that is about the 2019 train simulator game with the aim of this channel being to find AdSense on youtube, let's be enthusiastic about the content so that it is prosperous, but don't forget to pray 5 times for those who are Muslims."

"All Videos Only Happens In The Game."

The channel has consistently been posting train simulations, as shown here.

Below is a screenshot comparison of the video in the misleading post (L) and the YouTube video (R):

A photo of an actual Belt and Road train that runs from China to Europe had been published here by Hong Kong-based online news organisation HK01.