Paramilitary soldiers stand guard at the site of an attack at the Pakistan Stock Exchange in Karachi on June 29.   © Reuters
ADNAN AAMIR, Contributing writerAugust 1, 2020 17:19 JSTKARACHI -- Baloch and Sindhi separatist groups in Pakistan have announced they are forming an alliance aimed ostensibly at attacking Chinese interests in a development likely increase security costs for Belt and Road Initiative projects in Pakistan.

On July 25, Baloch Raji Ajoi Sangar, or BRAS, a consortium of four Baloch separatist organizations, announced in a media release an alliance with the Sindudesh Revolutionary Army, or SRA, a little known separatist group operating in southeastern Sindh province. Balochistan is another province in the southwest.

The CPEC consists of a variety of infrastructure projects under China's Belt and Road Initiative with financial help from Beijing. Pakistan and China, which both have tense relations with India, have been allies for decades.

Baloch insurgents claimed that an attack on the Pakistan Stock Exchange in June was carried out with support from Sindhi separatists. Security officials told local media that with the alliance Sindhi insurgents can now launch deadlier attacks with the help of Baloch militants. Members of the Crime Scene Unit of the Karachi Police prepare to survey the site of the attack at the Pakistan Stock Exchange.   © Reuters

Experts believe that while the alliance can create problems for the CPEC, it cannot halt the flagship project of President Xi Jinping's trademark program. "An alliance between the Baloch and Sindhi armed groups cannot be so effective that it will compel China and Pakistan to completely withdraw from [CPEC] plans," said Malik Siraj Akbar, a South Asian analyst based in Washington D.C.

However, analysts also think that the grouping will significantly increase security costs for CPEC activities.

"As China doubles down on the CPEC infrastructure projects from Kashmir to Karachi and Gwadar, the insurgent forces will seek to raise the costs by launching attacks and raids," Mohan Malik, a professor of strategic studies at the National Defense College of the United Arab Emirates, told the Nikkei Asian Review.

In May 2019, the Baloch Liberation Army, a BRAS constituent, attacked the Pearl Continental Hotel in Gwadar, the port city's only five star hotel, and killed five people including four hotel employees. Though no Chinese were killed, the BLA said in a statement that the attack was planned with the intent of targeting Chinese, who often stayed in the hotel.

Akbar, meanwhile, sees the government's expected moves to beef up security in response to more attacks as playing into the hands of the new alliance.

"An increase in violent attacks will require reevaluating the security plans and timelines for the completion of certain parts of CPEC," he told Nikkei. "The more the government increases security [for CPEC projects], the more it gives the nationalists a reason to tell the local population that these are exploitative projects aimed to take their resources away." 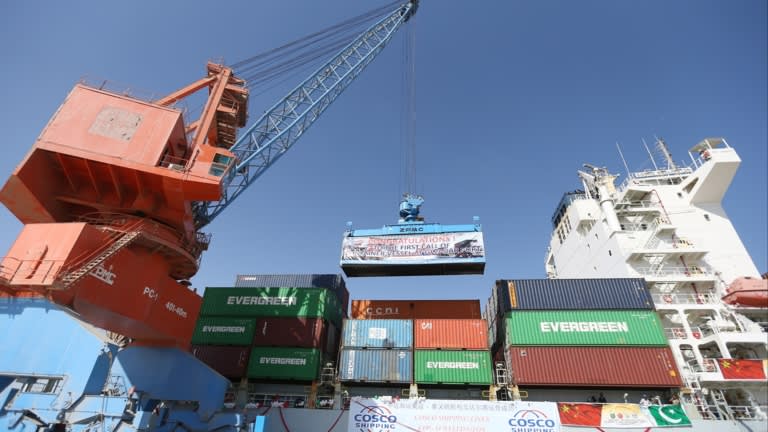 A ship carrying containers is seen during the opening of a trade project in Pakistan's Gwadar port, west of Karachi, in November 2016.   © Getty Images

Experts also link the new alliance to the recent India-China military standoff in the Himalayas. Malik believes that an escalation in separatist violence and proxy wars on the subcontinent will be an inevitable consequence of New Delhi-Beijing security tensions. "[India and China] will engage in an intense geopolitical competition to win over the allegiance of countries and [separatist movements] hostile to the other."

Other experts see a relationship between the forming of the new alliance and phenomenon of resistance by local communities to China's growing role. Chinese President Xi Jinping, right, shakes hands with Pakistani Prime Minister Imran Khan before a meeting at the Great Hall of the People on April 28, 2019 in Beijing.   © Getty Images

Anand cautioned, however, that the threat posed by the Baloch-Sindhi separatist alliance to Chinese interests should not be blown out of proportion. "The claims of Baloch and Sindhi nationalists [to attack the CPEC] should be taken with a pinch of salt because the economic might of China is closely tied in with [the] security-military might of the Pakistani state and separatists cannot match that," he told Nikkei.

Experts also see the formation of the new alliance as a factor that can push Pakistan and China to make CPEC more inclusive. Akbar believes that the two countries might also start considering employing more locals in CPEC projects in an effort to gain support from communities by giving them an economic stake in the projects.

Anand said that Pakistan must for now wait and watch. "Whether CPEC can be turned into an engine for inclusive development rather than a highly visible security-economic prestige project perceived by many Baloch or Sindhi separatists as neocolonial, is an open question," he said.