This is a remarkable book with a chilling message. The Chinese Communist party, for which dominating rural China in order to encircle its cities and win the civil war is part of its historic backstory, is now intent on doing the same internationally.

Using whatever lever comes to hand — generously financing a thinktank in Washington, owning a part-share of Rotterdam port, encouraging “friendship” clubs like Britain’s 48 Group Club — it is aiming to create an international soft “discourse” and hard infrastructure that so encircles western power centers that the dominance of the party at home and abroad becomes unchallengeable.

China, we know, has very different definitions of terrorism, human rights, security and even multilateralism to those accepted internationally. The book spells them out and shows how intent the party is on winning international acceptance for them as vital buttresses to its power. Acts of terrorism include not eating pork or speaking out against one-party “democracy,” as the Uighurs and denizens of Hong Kong are learning. Human rights should be understood as the people’s collective right for Chinese-style economic and social development. 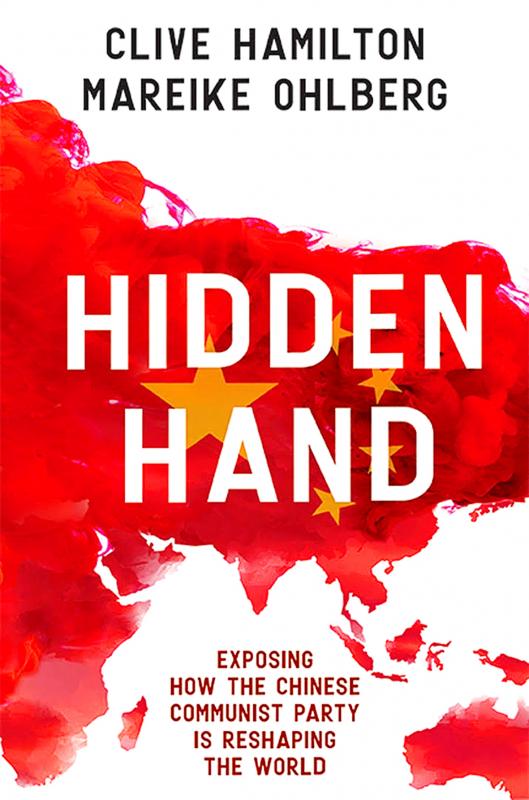 Hidden Hand: Exposing How the Chinese Communist Party is Reshaping the World by Clive Hamilton and Mareike Ohlberg

Multilateralism means states acting in harmony with China and its view that economic development is the alpha and omega of all international purpose — the vision set out in the Belt and Road Initiative (BRI).

The BRI is well known as President Xi Jinping’s (習近平) signature policy, through which China partners with governments to build and enhance ports and the wider transport infrastructure across Asia and Africa. I knew the way the BRI is characterized as representing a “community of common destiny for humankind” is nothing more than a front for China’s geopolitical aims, but I had not realized the stunning scope and reach of it. The BRI is the centerpiece of China’s efforts to reorient the world around the interest of the Chinese Communist party. It is breathtaking in its audacity.

Signatories to the BRI — most small states in Asia and Africa, and even within the EU Italy and Greece — get access to Chinese grants and loans for developing their infrastructure. The overt quid pro quo is that Chinese civil and military traffic are prioritized in ports and airports, or as People’s Liberation Army Navy sources put it, within the BRI they “meticulously select locations, deploy discreetly, prioritize cooperation and slowly infiltrate.”

Any signatory had better not recognize Taiwan — or object to events in Hong Kong. As party insiders confirm, the BRI is aimed at delivering the party’s geo-strategic dominance.

Integral to the BRI’s work is the party’s now huge and sophisticated United Front Work Department — Mao Zedong (毛澤東) described it one of the party’s three “magic weapons.” Essentially it coordinates the party’s “scientific” efforts to win “friends” — in ethnic groups, foreign political parties, western thinktanks, overseas Chinese communities, private companies, non-Chinese nationals sitting on the advisory boards of Chinese companies like Huawei. Its methods range from organizing sympathetic conferences and writing checks to occasionally organizing the clandestine seduction of foreign dignitaries to steal their secrets and the hacking of foreign computer systems.

Under President Xi the BRI and United Front have become the twin battering rams to project Chinese power. As Hamilton and Ohlberg say, the pretense that party and state are two different spheres has been dropped under Xi. China and the Chinese Communist party are coterminous — and every enterprise in China, state-owned or private, is surveilled by a Communist party committee.

All western states have until the last few months chosen to look the other way. After all the Chinese economy is now the world’s second biggest — and its huge investment in tech is conferring leadership in AI and 5G. The consensus has been that you have to engage with it.

Britain has been no slouch. Recall George Osborne and Boris Johnson’s visit to China in 2013, innocently opening the door to the party’s control of part of our new nuclear industry. Or David Cameron enjoying a beer with Xi in a Cotswolds pub heralding a “new golden era” in Anglo-Chinese relations.

The party looks particularly kindly on Britain’s 48 Group Club, founded in 1954 to promote Anglo-Chinese trade, whose members include businessmen such as Tom Glocer, former chief executive of Reuters, along with ex-politicians Tony Blair, Michael Heseltine and Peter Mandelson.

But its efforts don’t stop there. Academics, former ambassadors and even journalists like Martin Jacques, author of When China Rules the World, advocate of China’s view of globalization and critic of Hong Kong protesters, are all cited as good examples of how the party indulges its friends with privileged access. There are parallel efforts across the EU and in the US.

But Xi and the party’s ambitions have begun to be rumbled and challenged — a development that this book underpins. Subverting the Hong Kong treaties and breaking international law to suppress its millions of protesters under an extension of Chinese law, the suppression of the Uighurs and the growing trade aggression of the Trump administration, particularly on Huawei, have triggered the party’s first major reverses since Tiananmen Square in 1989.

Boris Johnson may say he won’t be pushed into becoming a kneejerk sinophobe, but Huawei is to be excluded from Britain’s 5G network by 2027. Yet seven years ago, playing to the Europhobe gallery, he set out to charm China as an alternative to the EU. How long will his determination to confront China, post-Brexit, last? This book’s convincing message is plain.

Don’t be gulled by soft talk of global harmony, or the prospect of access to the world’s second-biggest market. The Chinese Communist party aims to construct a world in which enlightenment values are subordinate to its own. The BRI and United Front are subduing criticism and reaction even as I write. Everyone must stay on their guard