August 10, 2020
Source: Social Media
Baloch Liberation Army (BLA) personnel today hurled a grenade at a stall set up for the August 14 celebrations near RCD Highway in Hub Chowki, Balochistan, injuring three security personnel and several of their local staff.
Baloch fighters carried out the attacked when a stall was set up in Hub Chowki, under the supervision of the forces to celebrate Pakistan's so-called independence. The stall was run by a man named Gulzar, under the directions and supervision of a Frontier Corps (FC) Colonel.
The Pakistani military is using its military might in different parts of Balochistan to force people to celebrate Pakistan's so-called Independence Day and is threatening serious consequences if they do not join. People are being forcibly hoisted Pakistani flags and badges. The Pakistani military is also mobilizing its mercenary death squads to intimidate people into joining the August 14 celebrations. By involving the Baloch in such celebrations at gunpoint, the army wants to give the world the failed impression that the Baloch nation is with Pakistan and recognizes its unnatural existence.
The way the Pakistani army in Balochistan has to celebrate August 14 at its hammer and tongs, and the way the Baloch people are disregarded of this day, it  proves our historical position that Baloch people care nothing about Pakistan and its unnatural existence.
We want to make it clear that the purpose of forcibly holding the August 14 celebrations in Balochistan is to undermine the historical status, position and the Baloch independence movement of the Baloch nation by imprinting fake and artificial Pakistan label on the Baloch society. This is part of the enemy's "propaganda war", the BLA can never allow it.  BLA will attack the events and stalls on August 14, so we want to warn the Baloch people to keep a very safe distance from such events and stalls to avoid any harm.
Baloch Liberation Army Spokesperson - Jeeyand Baloch
Date: August 10, 2020 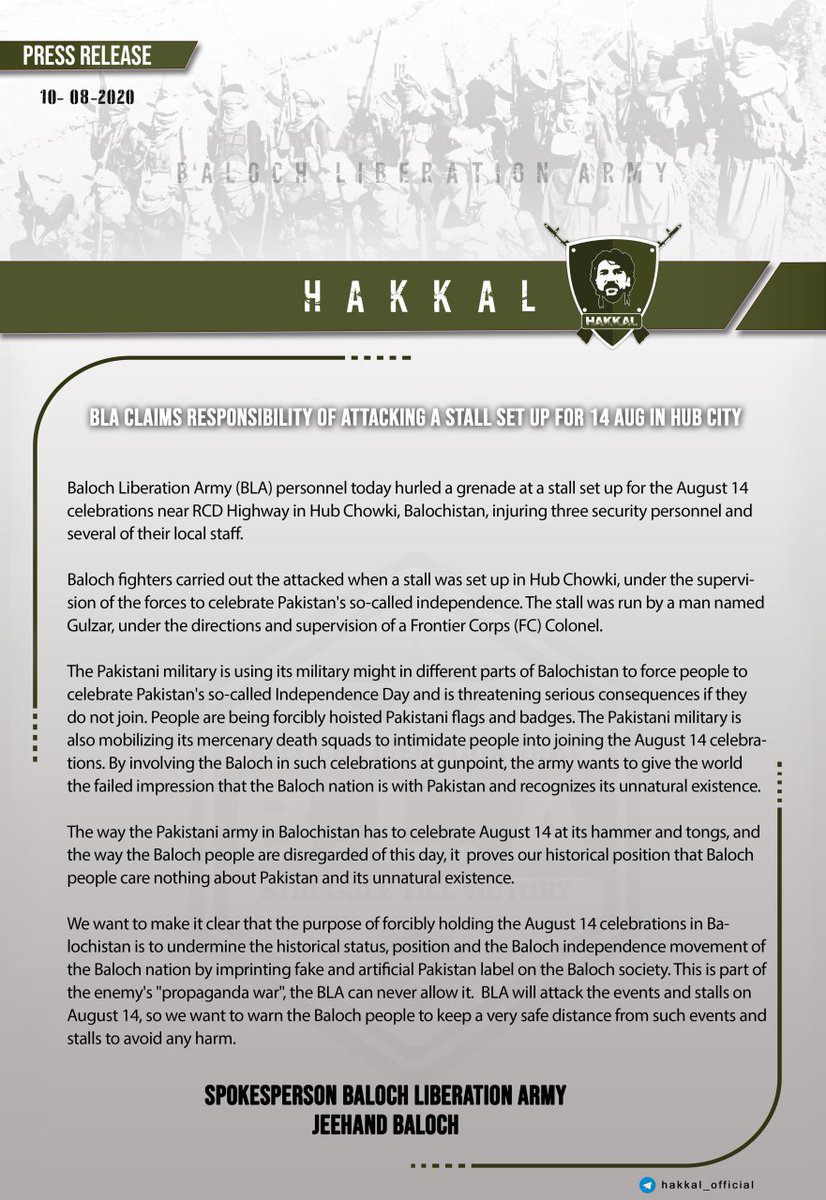