Refinitiv report says China had over $90bn in late, stalled or scrapped projects Tracks at Dazhou Station in China's Sichuan Province form part of the Belt and Road freight route.   © Reuters
DYLAN LOH, Nikkei staff writerJune 17, 2020 18:32 JSSINGAPORE -- China's ambitious Belt and Road Initiative, which aims to link countries across Asia and beyond through a string of infrastructure projects, has hit a major bump during the coronavirus pandemic.

A report released by analytics company Refinitiv on Tuesday showed a 15.6% drop in the number of new projects announced in the first quarter of this year, compared with the same period in 2019. The value of these projects fell 64.4%.

A total of 184 new projects were announced in the first three months, down from 218 a year earlier -- including both official BRI contracts and other projects with direct Chinese participation. The value of the projects slid to $137.43 billion, from $386.08 billion, over the same period.

Despite this, the cumulative value of China-linked projects topped the $4 trillion mark, Refinitiv said.

That sum is spread across more than 3,100 endeavors. According to Refinitiv, $3.3 trillion worth of projects were active, with about $590 billion completed. Projects worth $64.3 billion were on hold, with $14.8 billion delayed and $12.8 billion canceled.

Refinitiv classifies projects that are simply behind schedule as delayed, while on-hold ones have been temporarily halted. 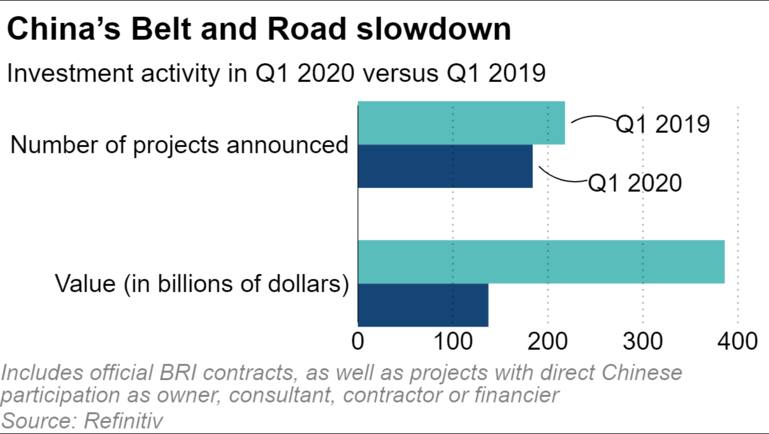 "Some of the biggest BRI participants, such as Pakistan, the Middle East states and Southeast Asian states are also reeling from the [pandemic] crisis, and have little appetite to pursue projects as their economies remain in stasis," Refinativ said.

The report noted that several emerging economies involved in the effort to create a network of sea, rail and road connections were already burdened with high debt levels even before joining hands with China, and that the pandemic is likely to worsen their plight.

Pakistan has sought an extension from China of the debt repayment period on $30 billion in loans for the China-Pakistan Economic Corridor, a flagship BRI project. That could save Islamabad around $500 million in annual cash payments to Beijing.

At the same time, economic shutdowns across Asia to contain the new virus disrupted logistics and supply chains, slamming the brakes on projects.

Michael Camerlengo, partner and head of infrastructure for consultancy KPMG in Hong Kong, was quoted in Refinitiv's report as saying that COVID-19 hit construction contractors across the region, with many experiencing difficulties in securing materials and workers.

China's own economic slowdown is another factor that could hinder the Belt and Road over the next two years, according to the report. But Beijing is not backing down: Amid the global health crisis, Refinitiv noted that China recently "rebooted" its Health Silk Road -- a plan for cooperation in the health care sector across the region.

"China's growing connections have already paid dividends," Refinitiv said. "It's likely that once the dust settles on the COVID-19, Beijing will be keen on rekindling economic ties with its partners to create new economic activity."