Delay of Some Belt and Road Projects Should Not Be Politicized, UAE Ambassador to China Says

By Tian Jiawei and Lu Zhenhua 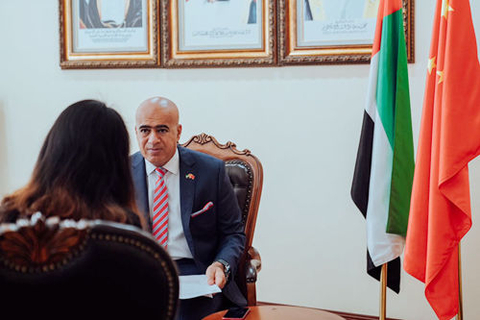 The United Arab Emirates ambassador to China said that the Covid-19 pandemic would delay some Belt and Road Initiative (BRI) project in western Asia, but the situation is understandable and should not become a political issue.

Ali Obaid Al Dhaheri, the ambassador to China from the United Arab Emirates, an active participant in the vast China-led infrastructure plan for Asia and Africa, told Caixin in an interview Friday that “there will be some delay” to some BRI projects as the region has not yet returned to normal amid the outbreak.

“China (is) now more than 90% back to normal. The issue is in other countries now. There (are) no flights at the moment, no activities,” he said. “I think there are hiccups in the projects in general, because of the size, the sophistication and technical aspects of the projects.

“But such a delay should not be catastrophic …,” he continued. “I don’t think this should be politicized in any way. Its a virus … a disease. There is no other magic answer to this.”

The ambassador’s comments came as questions have been raised about whether fallout from the coronavirus pandemic is putting the brakes on BRI projects due to the shutdown of economic activities and supply chain worldwide.

“China’s Covid-19 response all but halted the Belt and Road Initiative in its tracks. … A freeze on the flow of Chinese labor is a significant factor in these disruptions, with thousands of Chinese workers unable to return to their country of work,” the Council on Foreign Relations, a New York-based think tank, said in a blog post published in March.

“The Covid-19 crisis has also hampered China’s manufacturing supply chains, and BRI projects are predominantly reliant on Chinese, rather than local, materials and supplies,” the blog said.

However, the UAE ambassador said “we are still in the middle of fighting against the virus. We are not over it.”

He added that the situation is understandable and “we need to move forward.”

“Our nation wants to continue to play an active role across the Belt and Road Initiative,” he said. He did not elaborate on which projects could be delayed.

China is the UAE’s top trading partner. According to the ambassador, currently, the two countries have been working on multiple projects, including those in solar power, 5G networks and food security in the western Asia country.

To support an economy recovery, the UAE has announced a stimulus package in which its central bank has injected $70 billion into the banking system to guarantee liquidity, the ambassador said. The central bank has also lowered the reserve requirements for demand deposits to support banks’ lending and liquidity management.

He added that the UAE has also put a number of measures into place to support small businesses and ensure completion of large-scale government infrastructure projects.

In addition, several tax relief measures have been implemented across the UAE that have been supporting the country’s workers by shoring up the economy and protecting jobs, he said.