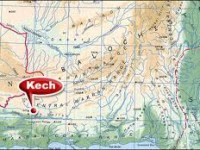 According to details, one of them shot himself at Gomazi Bin Pir area in Kech and the other killed himself by jumping in Nahing Naddi (river) in Tump area of the same district. in Tempe area of Ketch.

Meanwhile, Ali Wazir, a leader of the Pashtun Tehreek Movement and a member of the Pakistani National Assembly, tweeted on social networking site Twitter that minors were being recruited in the FC and were being sent war zone in Balochistan. 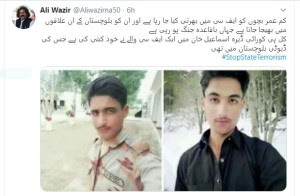 He further wrote that only yesterday an FC man committed suicide in Korai Dera Ismail Khan who was on duty in Balochistan.

Baloch and Pashtun analysts are of the view that young Pashtun children are forcibly being recruited in Pakistan Paramilitary forces and send to Balochistan in an effort to stir rifts between two nations.

It is to be noted that the Pashtun Tahafuz Movement (Pashtun Protection Movement) accused Pakistan army of gross human rights violations in Khyber Pakhtunkhwa and supporting the religious extremists including Taliban and other Jihadist networks.

Two young boys were also reportedly part of Major Nadeem’s team when he was killed in a roadside explosion in Balochistan on Friday.

It is must be remembered that recruiting child soldiers and using children in armed conflicts is prohibited under international laws.