Opposition politicians slam government for not evacuating citizens from Wuhan 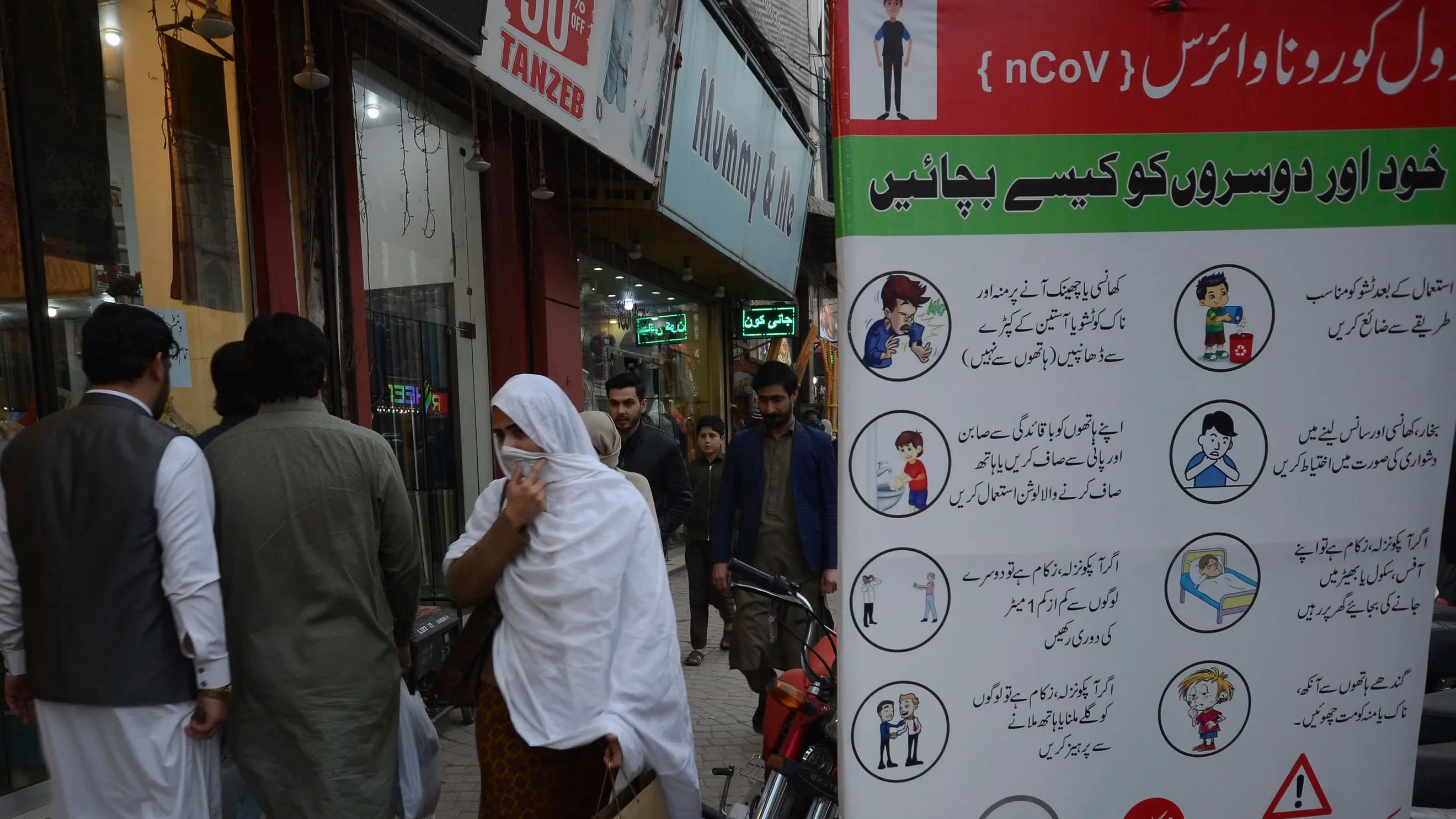 People walk by a banner aimed at raising awareness of the coronavirus in Islamabad. Pakistan, as of Saturday, does not have a confirmed case of the infection.    © APKARACHI -- Fears of the new coronavirus spreading to Pakistan have delayed a few projects in the China-Pakistan Economic Corridor, a key component of China's Belt and Road Initiative, in Lahore and South Punjab.

Although Pakistan has not had any confirmed case of the deadly virus yet, the death toll has reached more than 200 in China, according to health authorities in Beijing. There are confirmed cases in more than a dozen countries, including India and Nepal in South Asia.

Economic corridor projects were halted on Thursday in South Punjab, reported The Nation, a Pakistani daily. Seventy-one Chinese engineers, along with local security personnel, are undergoing screening for coronavirus, the report said.

Work on Orange Line Metro Train project in Lahore was also suspended. Chinese workers were asked to remain in their compounds for three days, during which they will be screened for coronavirus, reported daily The News.

The Orange Line is the largest mass urban transit project taking place under the auspices of the economic corridor, at a cost of $1.63 billion. Uzair Shah, general manager of the project, told members of the media that work on the project has stopped temporarily. Chinese people working on the Lahore Safe City project were also restricted to their compounds as a precaution.

The Chinese Consulate-General in Lahore has canceled all upcoming meetings due to concerns about spreading coronavirus. Peng Zhengwu, the deputy consul-general, confirmed to local media that the meetings have been canceled, saying the decision is an internal quarantine measure. According to a report by The News, another local daily, the Chinese consul general in Lahore has instructed all Chinese that have come to Pakistan in recent days to stay indoors for the next two weeks.

Meanwhile, Pakistan has sent a message of support to China after the number of confirmed cases of coronavirus exceeded 9,000 and the death toll topped 200.

"For our part, we stand ready to extend every possible assistance to our Chinese brethren to help deal with the aftermath of coronavirus. We are also extremely thankful to the Chinese government for extending the best possible assistance to Pakistani nationals in China," Foreign Minister Shah Mehmood Qureshi said in a statement.

The World Health Organization on Thursday declared coronavirus a global health emergency. Pakistan's government has halted all flights to and from China through Sunday. Abdul Sattar Khokhar, additional secretary of aviation, confirmed the halting of flights to China, Reuters reported.

Rumors have swirled that coronavirus had spread to Gwadar, a port town in southwest Pakistan. There were rumors on social media that six Chinese people working at the port had been diagnosed with the illness. Hundreds of Chinese affiliated with Chinese Overseas Port Holding Company work at the port.

Gwadar's district health officer later denied these rumors and said that no one has tested positive for coronavirus in the city. Local sources told the Nikkei Asian Review that Chinese personnel have not had close contact with citizens of Gwadar, making the risk of transmission of the virus very low.

Despite China and Pakistan being neighbors and huge flows of people between the two countries, no cases of coronavirus have been confirmed in Pakistan as of Saturday.

"Four individuals suspected of having the virus were ... kept under observation and their samples were collected, and we could say with a great degree of certainty that the individuals do not have coronavirus," said Zafar Mirza, special assistant to prime minister for health.

In the debate surrounding the virus in Pakistan, the biggest issue has been Pakistani students stranded in China. Coronavirus has been confirmed in four Pakistani students in Wuhan, the epicenter of the outbreak, said Mirza. However, Pakistan has decided to not evacuate its citizens from China to prevent coronavirus from spreading further, Mirza told reporters. He added it was in the "larger interest of the region" to not evacuate Pakistanis in Wuhan. "This [decision not to evacuate Pakistanis] is what the WHO is saying and this is what China's policy is," he said. "This is also our policy."

The decision has drawn harsh criticism from opposition politicians and civil society. Sen. Raza Rabbani, former chairman of the Senate, demanded that Pakistanis stranded in China be airlifted home in special planes. Sen. Mushahidullah Khan demanded that the government take immediate action to help its citizens in China.

But lawmakers from the ruling Pakistan Tehreek-e-Insaf party defended the decision not to bring Pakistanis home China. Sen. Seemi Ezdi said the Chinese "have better access to health facilities and are also trying to come up with a treatment for the virus. [Pakistan] cannot treat this virus. The government's decision is in the best interest of Pakistani citizens," she said