The Belt and Road: Calculating Winners and Losers

A World Bank working paper attempts to put a number on the gains – and potential losses – for each country. 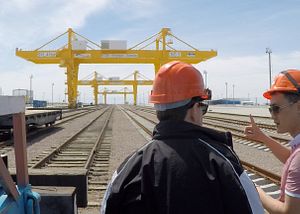 Since Chinese President Xi Jinping unveiled the Belt and Road Initiative (then referred to separately as the Silk Road Economic Belt and Maritime Silk Road) in two speeches in the fall of 2013, proponents have described the massive undertaking as “win-win.” Increasing connectivity will help the entire world prosper, the argument goes. Critics sneer, however, that “win-win” means China wins twice: by exporting its labor and materials surplus abroad and by gaining strategic footholds in foreign countries.

But because the BRI is a relatively new concept and few of its projects have been completed, it’s difficult to actually put a numerical value on the benefits – for China or for any other country. Without a way to quantify the costs and benefits, it’s hard to definitively answer the question of which countries stand to come out ahead – and which might be better off bowing out.

A working paper from the World Bank released earlier this year, however, attempts to put a number on the gains (and, in a few cases, losses) to be expected from BRI infrastructure construction. The paper, authored by François de Soyres, Alen Mulabdic, and Michele Ruta, attempts to quantify the impact of BRI-related transportation infrastructure projects on gross domestic product (GDP). As the authors note:

[T]he model shows that gross domestic product will increase by up to 3.4 percent for participating countries and by up to 2.9 percent for the world. Because trade gains are not commensurate with projected investments, some countries may experience a negative welfare effect due to the high cost of the infrastructure.

In other words, the BRI will improve global GDP as a whole and the GDP for most individual counties – but some participants will experience a net loss, because BRI gains are not correlated with the costs for individual countries. Notably, that means the benefits are not isolated to BRI participants, either.

To attempt to project the BRI’s impact on GDP, the researchers compiled their own database of BRI transportation infrastructure projects and costs, then estimated the impact on shipping time if all the projects were to be completed. The results provide an estimate of gross GDP benefits as well as the estimated “welfare” benefit, which takes into account both the GDP boost and the estimated cost of building the infrastructure. (The full technical details behind the calculations are available in the paper itself.)

One of the major takeaways is the scale of the benefit to be expected. A 2.9 percent GDP boost for the whole world is not to be taken lightly. And the benefits are to be truly global; even countries that don’t participate in the BRI are projected to gain a GDP boost because of overall lowered transportation costs.

Interestingly, the region that stands to receive the biggest GDP gain is sub-Saharan Africa, at 4.16 in the paper’s more optimistic scenario. This is “because of the new ports in Tanzania and Kenya that improve substantially the connectivity of those two countries to other BRI countries and the rest of the world,” the authors write. East Asia and the Pacific follows at 3.82 percent, which is to be expected given the BRI’s core focus is on this region. Notably, however, South Asia would only grow by 2.47 percent – still a sizable boost, but below many other world regions.

Those figures, though, don’t factor in the costs of all this infrastructure constructions. Using the paper’s “welfare” metric, sub-Saharan Africa would see a net GDP gain of 3.23 percent; East Asia and the Pacific, 2.76 percent; and South Asia, 2.3 percent.

As mentioned above, those gains are not reserved for BRI participants. Non-BRI countries in East Asia and the Pacific, for instance, are estimated to see net GDP growth of a whopping 6.88 percent. North America, far off the BRI track, will also grow by a net of 2.29 percent. And India, which has loudly and repeatedly refused any cooperation with BRI due to sovereignty concerns, is projected to see its GDP grow a net of 2.03 percent thanks to the Belt and Road.

The inclusive nature of the BRI means that, overall, the initiative will bring larger benefits than regional trade pacts. As the researchers explained in a separate op-ed discussing their findings, “Unlike regional trade agreements, which decrease tariffs within a narrowly defined set of countries, the BRI is expected to decrease trade costs between a large number of countries, including many economies that are not part of the initiative.”

That said, some of the biggest winners are to be expected. Pakistan, for instance, with the China-Pakistan Economic Corridor as the BRI’s “crown jewel,” should see a “welfare” boost of 5.18 percent. Laos, which will host an ambitious railway project, will grow by a net of 4.73 percent.

Some of the other big winners, though, are more surprising. Many of the larger gains cluster in the Middle East: Iran is projected to notch net GDP gain of 5.34 percent; Kuwait, 5.48 percent; Saudi Arabia, 5.22 percent; and Qatar, 5 percent. And Taiwan, which is decidedly not a part of Beijing’s BRI, is also one of biggest beneficiaries with a predicted welfare gain of 4.33 percent.

Other countries with headline-level involvement in the BRI, though, stand to benefit relatively little. Sri Lanka, for example, home to several massive BRI projects such as Colombo Port City and Hambantota port, is expected to only grow its GDP by 1.23 percent, once the costs of those projects are accounted for. Indonesia too will gain only 1.87 percent in net GDP, despite Jakarta’s enthusiasm for the BRI amid a domestic infrastructure push.

And some countries that will largely be used for transit will actually see lowered GDP once the costs are taken into account. Azerbaijan fares the worst in the model, with an estimated loss of 4.06 percent GDP, followed by Mongolia at negative 1.95 percent. Tajikistan is right on the edge, gaining just 0.84 percent in the paper’s “upper bound” scenario and dropping by 0.04 in the “lower bound” projection.

As the authors note:

For any country, building a railway or a road has some value, but it also has value to the countries around it since improvements in one part of the transport network reduce shipping times for all countries in the network….This raises the possibility that the countries that will build — and bear the cost of — large sections of the project may not be the ones that will gain from it the most.

In fact, the paper posits that the gains would only be equalized if some countries are actually paid for their participation in BRI, rather than paying for infrastructure construction on their soil. In a thought exercise that optimizes growth for all countries, the researchers conclude that not only Azerbaijan, Mongolia, and Tajikistan, but also Bangladesh, Georgia, and Indonesia as well as other countries would all have to be compensated to bring their welfare benefit in line with other countries’.

There are a number of caveats to this research. For one thing, it only takes into account transportation infrastructure projects – roads and railways. That means its cost-benefit projections don’t factor in energy projects, telecommunications infrastructure, industrial zones, and other pieces of the BRI. The authors also only estimate the benefits as defined by reduced trade costs – there are other potential benefits, of course, starting with the potential for increased trade volumes due to easier transportation.

Another caveat is that the paper only included projects the researchers could independently verify. In addition, they had to estimate costs on their own in many cases, based on average construction costs for relevant countries. The BRI is notoriously amorphous and opaque; simply pinning down what projects are part of the Belt and Road is a herculean task, much less putting a dollar value on the costs of those contracts. Those difficulties will continue to plague researchers unless and until China, as the key partner in all BRI projects, vastly increases its publicly available datasets.

Despite these caveats, the overall considerations are well worth taking into account for BRI countries. The biggest takeaway is that the BRI is indeed poised to be a win-win for the world — but not every individual participant country will “win,” despite Beijing’s claims. Smaller countries, in particular, that stand to see trade largely pass through their territory without stopping should think long and hard about whether the benefits will be worth the hefty construction costs.

Shannon Tiezzi is Editor at The Diplomat.