Uzbekistan, an enchanting destination on the Silk Road, opens its arms 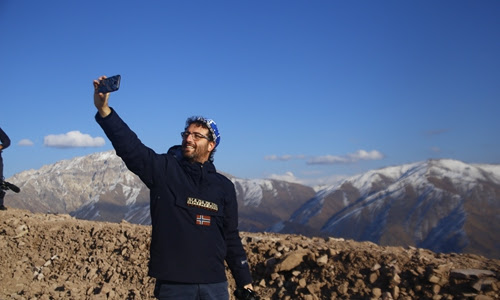 A tourist takes a selfie in the Amirsoy mountain resort in Uzbekistan. Photo: Yu Tianjiao/GT

The Central Asian country of Uzbekistan is opening its arms to tourists wider by making visits more enjoyable and providing a plethora of attractions nestled in its historical and cultural charms.

The flourish of Karnays (long trumpets) and the enchanting beat of drums said it all as beautifully dressed-up girls presented baskets with traditional cuisine.

The 25th Tashkent International Tourism Fair "Tourism on the Silk Road" held in the capital Tashkent from November 13 to 15 showcased what the nation has in store for tourists.

The fair is the brightest, largest event in the tourism industry of Uzbekistan and the entire Central Asian region. The country ushered in a new era in the 25th year of the event.

From next year, Uzbekistan will offer Chinese citizens a seven-day visa-free trip to the country.

In an exhibition area covering over 10,000 square meters at UzExpoCenter, the traditional Uzbek melodies wafted in the air as dancers and pavilion staff in exquisite national costumes rubbed shoulders with visitors.

According to organizers, 140 enterprises from 26 countries were drawn to the exhibition this year. Tourism authorities of 14 Uzbek states and more than 800 domestic companies joined in.

Tourism has played an increasingly important role in Uzbekistan in recent years, especially after President Shavkat Mirziyoyev approved the Concept for development of tourism sector in the Republic of Uzbekistan for 2019-2025 in January.

The reforms aimed at liberalization seek to unlock the country's potential for international business. The president issued a clear message that developing tourism is among his top priorities.

A new era awaits as the president noted during a video meeting that "2019 will be a turning point in the development of tourism."

"We have to admit that Uzbekistan is now a much more open country than over a decade ago; we would like to take this opportunity to show the world what we have," said Abdulaziz Akkulov, Acting Chairman of the State Committee for Tourism Development of the Republic of Uzbekistan. "We also hope to build a good platform for the tourism industry, so that the three-day expo can benefit entrepreneurs from domestic and international business." Lying at the heart of Central Asia, Uzbekistan is home to a number of Silk Road cities with extraordinary historical heritages included on the UNESCO World Heritage list.

As a major intellectual center of the Islamic world, Bukhara has the largest number of Islamic saints' tombs, mausoleums and mosques.

"We have 660 scenic spots in our city," said Oybek Khakimov, First Deputy Director of Bukhara Regional Department for Tourism Development. But sitting on the cultural treasures is not enough, supporting infrastructure must be developed.

"There are more than 100 hotels under construction. We are planning to build more hotels in order to attract more tourists. We receive over 7,000 visitors per day now, and are expecting to double the number by the end of 2020," Khakimov said.

Like Bukhara, famous Silk Road city Samarkand, dubbed as "the pearl of the orient," is also trying to make itself more attractive and accessible by taking advantage of the extended national traffic network.

At a speed of 200 kilometers per hour, high-speed trains complete the trip between Tashkent and Samarkand in two hours.

"There are also many historical and natural scenic spots in the suburbs. The traffic network allows tourists to leave the city and enjoy the scenery with the most national characteristics," said Zafor Abdullaev, First Deputy Director of Samarkand Regional Department for Tourism Development.

More than 2,000 years ago, China's imperial envoy Zhang Qian arrived in the country of Dayuan, which is in the Fergana Region of Uzbekistan, marking the start of China-Uzbekistan trade and cultural exchanges along the ancient Silk Road. Now historical communications are thriving under the China-initiated Belt and Road Initiative (BRI).

Uzbekistan is one of the first countries to support and participate in the BRI, which has given fresh impetus to the country's economic development.

"The BRI is in our national interest, and we will always support it," Akkulov noted. "Uzbekistan­ is cooperating with countries along the Silk Road in the field of tourism. Our plans and measures to promote tourism coincide with the initiative, and Uzbekistan has actively consulted relevant Chinese departments."

Samarkand is one of the most ancient cities on the Earth with a history of over 3,000 years. Abdullaev said that they are working with Chinese investors on a number of projects. One of them is to build a Silk Road Tourist Town aimed at protecting the city's historical heritage.

"What the BRI provides are not just material benefits, but also better exchanges among all participants in terms of traditions, experiences, commodities and information. The future of the initiative is worth looking forward to and will bring the BRI countries and regions much closer," he added.

One customs officer at the Tashkent International Airport greeted me with Nihao ("Hello" in Chinese) and smiled generously after checking my passport.

According to the state tourism committee, 5.3 million foreign tourists visited Uzbekistan in 2018. The first 10 months of 2019 had already seen more than 5.5 million visitors, over 330,000 of them from China.

"All countries now want to make good use of the vast resource of China's tourism industry. As China's neighbor, Uzbekistan is certainly no exception," said Akkulov.

"But this is far from enough" for a country like China which has such a large population, he said.

Some Chinese citizens in Uzbekistan share the views of the tourism chief.

"I may say the performance-to-price ratio of tourism here is pretty high," said Zhao from Urumqi, Northwest China's Xinjiang Uyghur Autonomous Region, who has lived in Tashkent for over a year.

For Fang, who is seeking to build his own tourism business, this can as well be an opportunity.

"Uzbekistan can learn from the path taken by China, and facilitate itself with it," Fang said.

"I hope to bring experience and humanistic ideas from China to promote the economy here."
Newspaper headline: Pearl of tourism