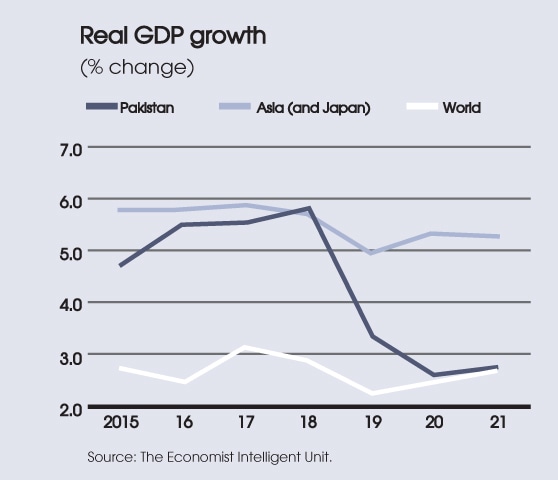 LONDON: The Pakistan Army will continue to shape the country’s foreign and security policy, a forecast report released by The Economist Intelligence Unit (EIU) said this week, adding that the governing PTI-led coalition is expected to be largely amenable to this arrangement.

“As a result, relations between the civilian government and the military will be positive,” added the report published by the research and analysis division of The Economist Group, the sister company to The Economist newspaper.

The report outlined Pakistan’s political and economic outlook for the period of 2020 to 2024 and forecast that the Pakistan Tehreek-i-Insaf (PTI) would serve its full term while opposition parties would remain in a state of disarray owing to legal challenges facing their leaders.

With regard to the PPP and PML-N, the report noted that the opposition would coordinate strategies against the government in an effort that would likely result in frequent obstruction to legislative proceedings in parliament. It added that while these moves against Prime Minister Imran Khan would increase pressure on his government, the EIU did not believe they would challenge the PTI’s grip on power.

“Our view assumes that the military (including its intelligence wing) — which has a lengthy history of intervening in politics — will continue to provide tacit support to the government, partly by using its extra-constitutional influence over the country’s judicial institutions. It will also continue to exert sway over Mr Khan’s administration, especially when it comes to its foreign and security policies. As long as the PTI enjoys the support of the military, its junior partners are unlikely to abandon the ruling coalition to join the opposition,” the report said.

It added that while China would remain Pakistan’s main strategic and economic partner in this period, ties with India would remain strained as cross-border terrorism and the dispute over occupied Kashmir “impede the normalisation of relations”.

The report noted that while improvements had been made, the security situation would remain a source of instability for the forecast period. “It will undermine growth potential by posing operational and strategic challenges to infrastructure projects and business investment,” the report read.

“Growth will slow owing to a tightening of monetary policy and acceleration in inflation, which will crimp purchasing power. A financial assistance package from the IMF, together with loans from other multilateral and bilateral donors, will help ease the strained balance-of-payments situation over the next few years, although the current account will remain in deficit in 2020 to 2024,” it said.

It expected the government’s efforts to address balance of payments pressures to have a “dampening effect on economic expansion”.

“We believe that the combination of a heavier tax burden across the economy and weaker government spending on public services will dampen economic activity. Moreover, inflationary pressures will weigh on the purchasing power of citizens, depressing consumption growth. These factors, combined with a tight monetary environment, will hamper investment and economic growth,” it said.

It also said that under the IMF programme, the government would significantly cut planned development spending, which mainly involved infrastructure projects. The EIU expected growth in both private and government consumption to slow significantly in 2019 to 2020.

The EIU noted that the PTI was elected on an “ambitious policy agenda” that included expanding social services, housing construction and job creation. But it predicted that Pakistan’s macroeconomic frailty would prevent much of this from being achieved.

“The party’s promises appear especially optimistic in view of the fiscal and balance-of-payments challenges facing the government. Poverty-alleviation schemes such as the Ehsaas programme, launched by Mr Khan in March, will have limited success,” the report said.

Despite strong opposition from entrenched interests within state-owned enterprises (SOEs), the EIU expected the government — at the IMF’s insistence — to make gradual progress on privatisation. The process, it said, would remain fraught with political complications, as many SOEs were overstaffed and successful restructuring would involve severe job losses. Moreover, regulatory inefficiencies, complex labour laws and an unreliable security situation would continue to weigh on the business environment, which would remain poor in 2020-24. Some attempts to reform the country’s inefficient bureaucracy were likely, but progress would be slow, it added.

The report forecast that China would remain Pakistan’s leading economic and strategic partner in 2020 to 20­24.

“Despite fiscal constraints and some hesitation over debt obligations associated with the China-Pakistan Economic Corridor (CPEC) — which is of major strategic importance to China’s Belt and Road Initiative (BRI) — China will remain the largest source of foreign investment, as well as a key strategic ally. Although China’s ongoing efforts to make the BRI more sustainable will limit financing for CPEC projects going forward, we do not expect this to affect broader China-Pakistan ties,” the report said.