China's Belt and Road Initiative: Where it goes and what it's supposed to accomplish 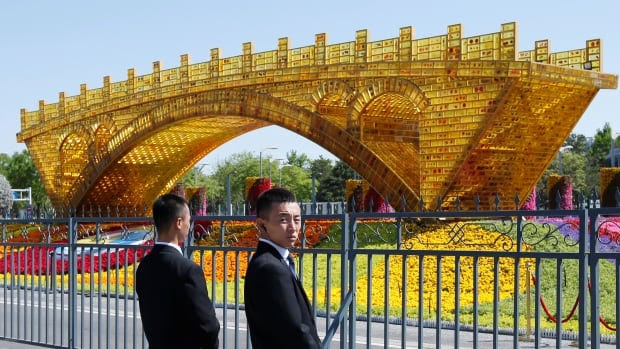 Security personnel stand guard near a "Golden Bridge on Silk Road" decoration for the Belt and Road Forum outside the China National Convention Center in Beijing earlier this year. (Jason Lee/Reuters)

This story is part of a CBC News series exploring China's expanding influence around the world and how Canada and other countries are contending with China's power.

Back in 2013, when the U.S. and many other countries were still recovering from the Great Recession, Chinese President Xi Jinping announced perhaps the most transparently ambitious foreign policy of the new century: the Belt and Road Initiative.

The name is a nod to the Silk Road, the ancient network of trade routes that connected China with the Roman Empire and many societies in between.

The modern version envisioned by Xi goes even further.

China is financing hundreds of billions of dollars' worth of infrastructure projects — including ports, roads, bridges, railways, power plants, telecommunications networks and much more — in partnering countries throughout Asia, Africa, Europe and beyond.

The purpose, China says, is to accelerate and enhance development and trade in order to create new markets and opportunities for China and its partners. 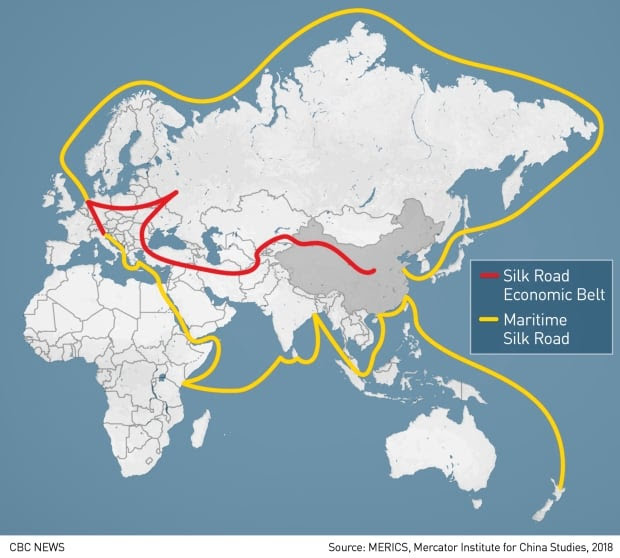 An overview of China's Belt and Road Initiative. (CBC)

The project also seeks to create six economic corridors that would facilitate the transportation of people, goods and data. 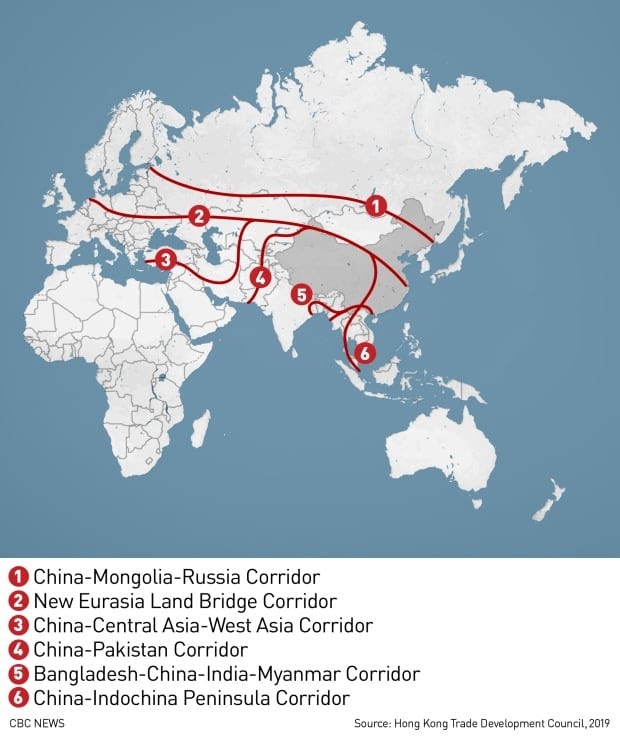 A look at the six planned economic corridors of China's Belt and Road Initiative. (CBC)

Determining which projects are actually part of the Belt and Road Initiative can be tricky.

Some infrastructure projects that were underway before Belt and Road was announced in 2013 have reportedly been rebranded as part of the initiative.

And many participating countries, such as those in the Caribbean and South America, for example, are not located anywhere near any of Belt and Road's six economic corridors, or either the Silk Road Economic Belt or the Maritime Silk Road.

Loans from China have enabled many countries to move ahead with infrastructure projects that may not have seemed possible before, including deep-sea ports, high-speed railways and massive hydroelectric dams.

The following map shows just some of the infrastructure projects either completed or underway across Asia and parts of Europe and Africa. 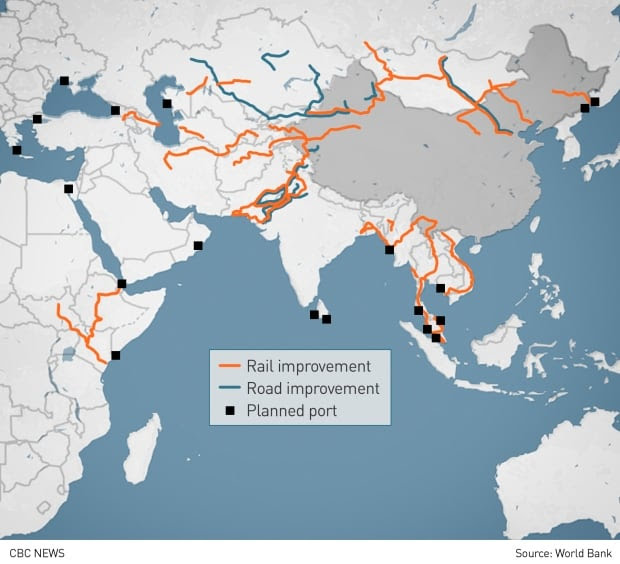 Graphic of rail and road improvements and new ports under China's Belt and Road Initiative. (CBC)

Here are some more figures that show the size and scope of China's investments.

The risks and rewards

The World Bank predicts that, if completed, Belt and Road projects could reduce travel times along the corridors 12 per cent, increase trade between 2.7 and 9.7 per cent, and lift 7.6 million people out of extreme poverty.

But the World Bank also says the policy carries potential risks, particularly for developing countries that may find themselves with unmanageable debt. 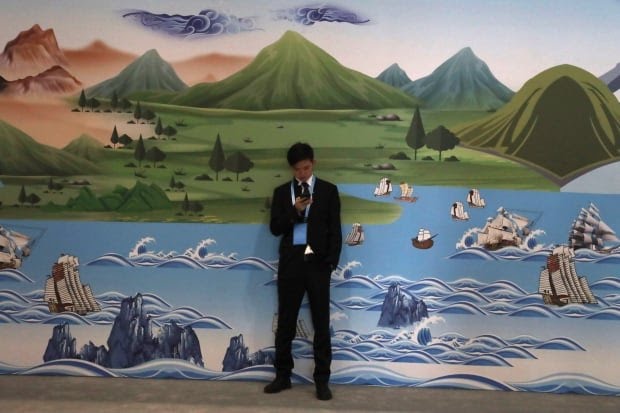 A man stands near a mural depicting the ancient Silk Road during the Second Belt and Road Forum in Beijing in April. At the event, China emphasized its commitment to ensuring greater transparency and environmental safeguards in Belt and Road projects. (Ng Han Guan/The Associated Press)

Some countries have already found themselves in that tough spot. Sri Lanka, for example, gave China a 99-year lease for its port of Hambantota to help ease its debt burden.

Other countries, such as Malaysia and Myanmar, have cut their potential debt load by billions of dollars by either scrapping or scaling back projects.

Critics of the initiative, which include U.S. Vice-President Mike Pence and Secretary of State Mike Pompeo, use such examples to argue the purpose of Belt and Road is less about trade and development, and more about China using so-called debt trap diplomacy to increase its sphere of influence.

A study from the Washington, D.C.-based Center for Global Development looked at the financial health of some countries receiving Belt and Road money. It identified eight recipients that are potentially headed for serious difficulty keeping up with their debt payments. 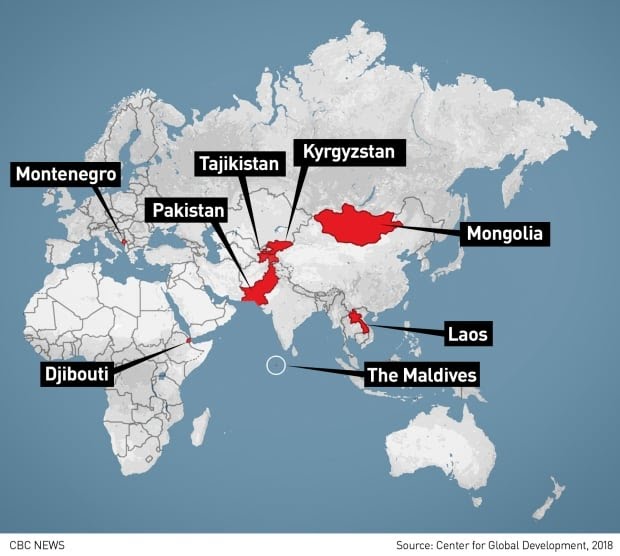 Countries that could find themselves in debt distress over their loans from China. (CBC)

In some participating countries, Belt and Road projects have been linked to corruption, or faced opposition from citizens concerned about environmental damage.

At a time when much of the world is trying to reduce its carbon emissions, loans from China have financed new coal power plants in Asia and Africa.

One of the benefits of Belt and Road for China is that it provides plenty of opportunities to put the country's industrial capacity to productive use all over the world, but some research suggests it does so at the expense of local contractors and workers.

At its Belt and Road forum, held in Beijing in April, China sought to reassure its partners, and potential partners, that the program will have a renewed focus on oversight and guarding against corruption, debt sustainability and environmental protection going forward.