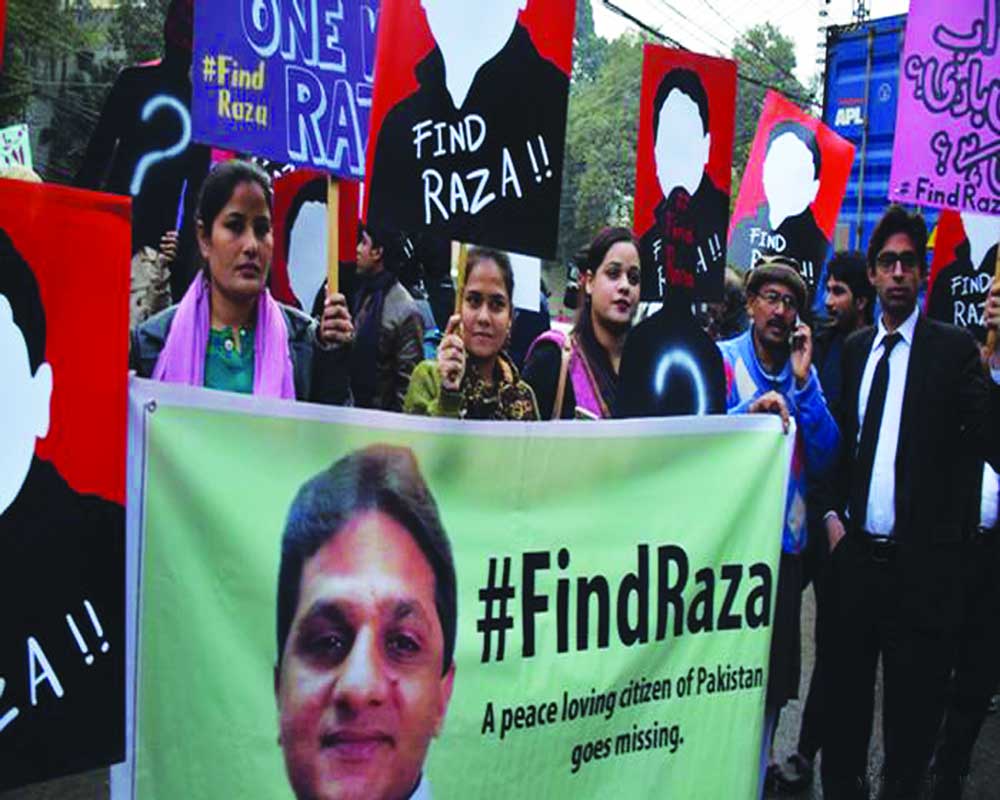 The Pakistan Army has enjoyed too much impunity for ostensibly serving Western strategic interests. But now, it is apparent that it cannot provide Washington with a safe Afghan exit

Gulalai Ismail, activist for women’s empowerment and Pashtun human rights, escaped to the US in September after four months in hiding after denouncing the Pakistan Army’s alleged involvement in sexual violence and disappearances. Expressing anxiety for her parents left behind, she said, “I do not see a prosperous Pakistan until the military establishment decides it needs to go back to its barracks.” Unfortunately, the Army sees itself as the guarantor of a security state and the Pashtun Tahafuz Movement, like the Baloch activists, is now in its crosshairs.

West Punjab-dominated Pakistan is now in open conflict with activists from Balochistan, Sindh, Khyber Pakhtunkhwa, even Gilgit Baltistan. All are highlighting the atrocities being perpetrated by the Pakistan Army. Islamabad’s machinations recently made Pakistan-born Baloch activist, Baseer Naveed, stateless. Though a permanent resident of Hong Kong, the executive director of the International Human Rights Council, Hong Kong (IHRC-HK) is now in danger of arrest, deportation or house arrest. After his son was killed in 2004, Naveed moved to Hong Kong in 2006 and took cases of enforced disappearances in Pakistan to the UN Working Group on Enforced and Involuntary Disappearance (WGEID).

After an attempt to pick him up in Thailand in 2016 failed, Naveed decided to seek Chinese citizenship with Hong Kong passport, which was approved by the Hong Kong Immigration in January 2018. As required, he surrendered his national identity card and passport but the Pakistani Consulate-General retained his passport (now expired) at the behest of unseen masters, his Renunciation Certificate of Pakistan Citizenship was cancelled, making him very vulnerable.

Meanwhile, disappearances continue. On March 23, 2019, medical doctor Zafar Saleem was picked up by intelligence agencies from Turbat, Kech, and released in a very critical condition in May 2019. In Karachi, doctors said his head injury, sustained as a result of torture, was fatal. Despite four months in hospital, he died on September 2, 2019.

On September 4, 2019, Usman Maqbool and his cousin Doda Rashid were abducted from Pidrak, Kech, by Shahmeer Aziz of Lashkar-e-Khurasan, an Islamic State affiliate. They left Maqbool’s minor son behind. Both men were handed over to the Frontier Corps and have since been missing. On September 10, 2019, activist Mir Ali Mohammad Chakrani returned home in Washuk district after attending a wedding when Armymen dragged him out in front of his family and sprayed him with bullets. Five members of Chakrani’s family had been abducted previously; while four were released against a ransom of Rs 6.5 million, the fifth is still missing.

Newly wed Hammal Murad and seven others were forcibly abducted from Tank Gazzi in Mashkay, Awaran, in August 2019. On September 9, the Army brought Murad’s dead body home to show his parents but took it back to the Ooghaar military camp and buried it in an adjacent graveyard. One abductee was released the same day but the whereabouts of the other six are unknown.

On September 16, 2019, Hani Gul, a student from Gwadar, told the media that she and her fiancé, Mohammad Naseem, were picked up by intelligence agencies from Karachi, where they were studying, and kept in torture cells for three months. At the Voice for Baloch Missing Persons’ protest camp in front of Quetta Press Club, Hani Gul said that while she was released after three months, her fiancé is still missing.

Meanwhile, four unidentified bodies, discovered separately, were brought to Civil Hospital, Quetta, where they were declared unrecognisable and buried in Dasht on September 16, 2019, by Edhi Foundation volunteers. Many mutilated bodies are routinely buried every year even though Pakistani courts have ordered that DNA analysis must be conducted on all “beyond recognition bodies.”

At the UN Human Rights Council (UNHRC) meeting in Geneva (September 9-27, 2019), Baloch writer Qambar Malik warned, “Islamic radicalisation in Balochistan is being used by the Pakistani authorities as a tool to counter the Baloch national struggle for the right to self-determination. These go together with the enforced disappearances and extra-judicial killing of Baloch nationalists by the security forces.” Malik said that the number of madrasas, which are a major source of recruits for the Taliban and the Islamic State, now exceeds the number of schools in Balochistan. Schools and universities are under constant attack from Islamic militants. Activists from Sindh also spoke of the grim atrocities inflicted on the people by the military, claiming that over 300 people have disappeared since February 2017.

The Government-established Commission of Inquiry on Enforced Disappearances has registered around 5,000 cases of enforced disappearances since 2014, most of which are still unresolved. Independent Pakistani and international human rights organisations claim that the numbers are much higher. Nearly 20,000 have reportedly been abducted from Balochistan alone; of these more than 2,500 have been found riddled with bullets and bearing signs of extreme torture. In fact, before he became the Prime Minister, Imran Khan often stated in media interviews that Pakistan’s intelligence agencies were involved in enforced disappearances and extra-judicial killings of activists in the country; he promised to resign if he failed to end this practice and bring those involved to account.

Samad Baloch, Secretary-General of the Baloch Human Rights Council, accused Pakistan of institutional violation of human rights in the province, in Sindh, and Khyber Pakhtunkhwa. Mehran Marri, son of veteran Khair Bakhsh Marri, told the UNHRC that Pakistan continues to commit “genocide and human rights violations in Balochistan”, even as it petitions the international community about human rights in Kashmir. Marri said Pakistan poses as international policeman for safeguarding the rights of Muslims around the world but cannot dare see what is happening to the Uighur Muslims in Xinjiang province  because Beijing is a “partner-in-crime” in Balochistan.

At the UNHRC session, Pakistan failed to muster minimum support for a resolution against India for reorganising its northern state of Jammu & Kashmir, while activists from Balochistan, Sindh, Pakistan-held Kashmir and Khyber Pakhtunkhwa clamoured for a UN investigation into the Pakistani States’ crimes against humanity. Indeed, the Pakistan Army has enjoyed too much impunity for ostensibly serving Western strategic interests. But now, it is apparent that it cannot provide Washington with a safe exit from Afghanistan.

(The writer is Senior Fellow, Nehru Memorial Museum and Library; the views expressed are personal)