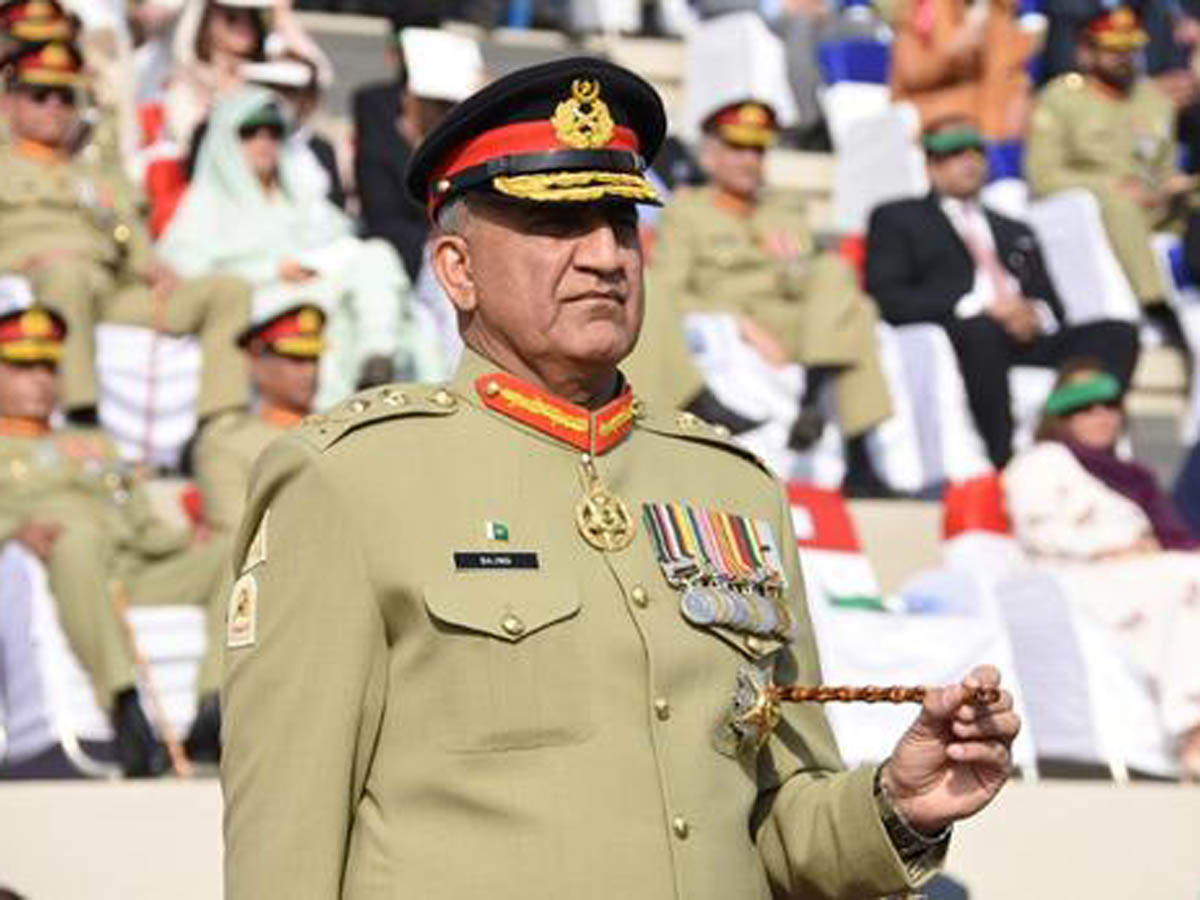 ✔Qamar Javed Bajwa has privately met top business leaders to find ways to bolster the economy, according to people familiar with the matter

✔Some of the meetings resulted in prompt decisions including sending instructions to top government officials, the people said

NEW DELHI: Pakistan’s already powerful military is taking an even greater role in running the country as the economy stumbles. Army chief Qamar Javed Bajwa has privately met top business leaders to find ways to bolster the economy, according to people familiar with the matter. The three meetings Bloomberg is aware of took place this year at heavily guarded military offices in Karachi, the financial capital, and Rawalpindi, a northern town that houses the army’s headquarters.

Read Also:Pakistan in the midst of economic crisis, says UN

At the meetings, arranged through mutual contacts, Bajwa asked business leaders how to fix the economy and what would lead them to make investments, said the people, who asked not to be identified. Some of the meetings resulted in prompt decisions including sending instructions to top government officials, the people said, without giving any specific examples. They said the general was concerned about restoring confidence among the business community.

An army spokesman declined to comment when asked about the meetings.

The military, which has staged numerous coups since Pakistan’s founding in 1947, has seen a direct impact from the economic slowdown: Defence spending was frozen in the 2020 fiscal year budget for the first time in more than a decade. That comes as soldiers are on high alert against terrorists based in Afghanistan and conventional forces in India.

Many business leaders and economic analysts in

actually welcome a greater role for the generals. They view Prime Minister Imran Khan’s party -- less than halfway through its first term in office -- as inexperienced compared with the military, which is the country’s most respected and powerful institution.

But others are concerned about what an ever-increasing role for the military means for Pakistan’s democracy and the future of civilian institutions that haven’t been given the space to develop.

“The growing role of the military in the economy’s management in addition to its traditional dominance of the security matters is nothing but a soft coup that is a setback for the democratic process,” said Yousuf Nazar, a former Citigroup Inc banker and author of a book on Pakistan’s economy. “This will have far reaching repercussions,” he said, adding generally that strong-arm methods for management will not work for basic economic and social issues.

Recipes for a 'healthy you' by eatfit

The Pakistan's finance ministry downplayed the extent to which the army influences economic policy. While the army chief may have ideas about the economy, “we haven’t seen any kind of process interference,” finance ministry spokesman Omar Hamid Khan said. “They have their own scope of activities and civilian government has their own.”

Pakistan is going through an unusual period in which the democratically elected government and the army appear to be working in sync. The army has ruled the country for almost half its 72-year-old history, leading to persistent worries among civilian leaders about a potential coup.

Khan has publicly stated his government and the army have a comfortable working relationship. He gave the 58-year-old Bajwa a three-year extension as army chief in August -- only the second time that’s happened in nearly a decade -- amid heightened tensions with India over Kashmir. Bajwa was initially reluctant to accept the extension but his personal ties with several top government leaders across the world made the prime minister press him to stay in office, according to army spokesman Asif Ghafoor.

“This is the first government with which the army is standing,” Khan said in a television interview in July. “Historically, the army and the government worked separately. Right now, all institutions are standing with me.”

The government estimates economic growth in Pakistan at the slowest pace in over a decade -- at 2.4% in the year started July. Pakistan secured a $6 billion loan in May from the International Monetary Fund to help stabilize the economy after a deficit blowout.

The nation’s budget deficit rose to 8.9% of gross domestic product in the year ended June, the highest in almost three decades, while record imports about two years ago had left foreign reserves dwindling. Companies across the board, from Toyota’s local unit to Power Cement Ltd have reduced production while many others, including Nestle SA’s Pakistan unit, have cut their workforce.

In the closed-door meetings with businessmen, the army chief discussed the country’s current account deficit, the problem of corruption and slowing foreign direct investment, the people familiar with the interactions said.

“We need generals looking after every aspect of Pakistan’s economy,” said Faizan Ahmed, research head at Karachi-based Optimus Capital Management Pvt. “The army is the most professionally organized and well-run institution in Pakistan.”

A Gallup Pakistan opinion poll released in 2017 -- the most recent data available -- showed the vast majority of Pakistanis trust the military more than other institutions even while backing democracy as the best system of governance. The business leaders saw the meetings with Bajwa, who has a reputation for getting things done, as beneficial to them given the military’s power and decision-making clout.

The army itself has a substantial stake in the private sector. It runs the Fauji Foundation, Pakistan’s second largest conglomerate, with interests in everything from food to power.

Yet despite its business interests and all-pervading presence in most aspects of Pakistani life, the move to seek an active role in shaping economic policy has still surprised many observers.

“While the military has historically played a key role in foreign and national security policy, its role in the economy has mostly been limited,” Uzair Younus, a South Asia director at Washington-based consultancy Albright Stonebridge Group LLC. “However, with the economy slowing down, the stakes have been raised as a persistently weak economy risks defence budget allocations.” 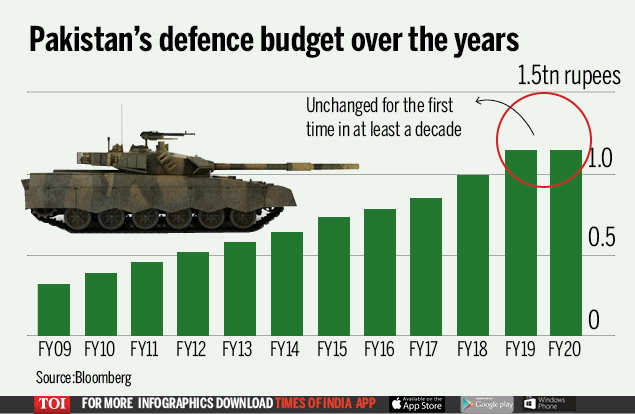 Bajwa has been named a member of the high-powered National Development Council, put in place in July to set the country’s long-term economic policy. A member of the army’s Inter-Service Intelligence has also been nominated to a government committee set up to monitor the energy sector.

The nation is looking to avoiding tough financial sanctions to meet global anti-money laundering and counter-terrorism financing standards and has also appointed a high-level committee that includes at least two senior military officials.

The army is stepping into its new economic role at a time when the slowdown has hurt Khan’s ratings.

For the first time since the elections in July last year, Khan’s approval rating has fallen to a level where more people don’t like him. The prime minister’s popularity has dwindled about 18 percentage points from 64% during elections last year to 46% in August, according to a survey by Roshan Pakistan. Khan’s proximity to Bajwa is likely to help him ride out the drop in ratings.

“Any drop in ratings or opposition alliance is not a threat for Khan because he enjoys unprecedented total complete support of the establishment,” said Rashid Ahmed Khan, who heads the department of politics and international relations at the Lahore-based University of Central Punjab. “The army is the only support that can save Imran Khan from downfall.”