KURDS: ‘Some of the Most Noble People I’d Ever Met’

U.S. military officers who fought in Syria say they are devastated and ashamed by Trump’s decision to abandon Kurdish-led forces. 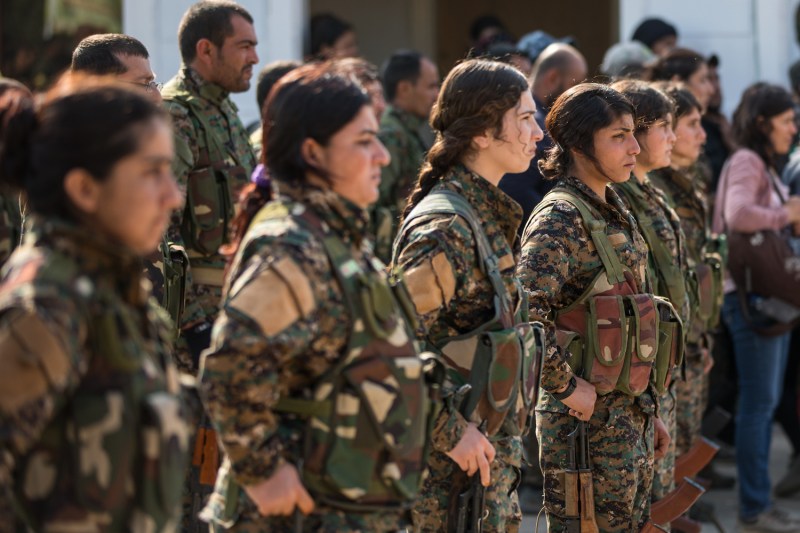 Members of the Syrian Democratic Forces stand in formation during a victory announcement ceremony over the defeat of the Islamic State's so-called caliphate at Omar Academy in Deir Ezzor, Syria, on March 23. U.S. ARMY PHOTO BY STAFF SGT. RAY BOYINGTON

On Dec. 20, 2018, the day after U.S. President Donald Trump abruptly announced via Twitter that the United States would withdraw all U.S. forces from Syria, a group of U.S. soldiers set out on a routine patrol through Manbij, a Kurdish-held town in northern Syria.

A member of the Kurdish-led Syrian Democratic Forces (SDF) approached the American troops, according to a U.S. Army officer on patrol that day, who spoke to Foreign Policy on the condition of anonymity. The man broke down in tears, thanking the U.S. service members for their support.

“He took off his unit patch and gave it to me. It was the most emotional moment I’ve ever experienced,” said the officer, who fought alongside the SDF in the yearslong battle to defeat the Islamic State and is one of many retired and current service members who say they are devastated by Trump’s latest decision to withdraw troops from the border, paving the way for Turkey to launch a major attack on northeastern Syria.

Seeing the group’s reaction to Trump’s tweet on the front lines in Manbij “was when I truly found out that the SDF were probably some of the most noble people I’d ever met.”

In the end, Trump partially reversed his pledge, drawing down U.S. presence in Syria by roughly half in the months since the tweet. But nearly one year later, the United States has once again disappointed its Syrian allies. The SDF, the militia largely responsible for liberating Syria from the Islamic State, is now under a brutal assault by Turkish forces, after Trump appeared to give the green light for Ankara to move into northeastern Syria. The total number of fighters and civilians killed in the operation so far was not clear as of Wednesday night, but a conflict monitoring group said more than 60,000 civilians had been displaced.

Current and retired U.S. military officers interviewed by Foreign Policy about their direct experience with the SDF, who spoke on the condition of anonymity in order to discuss sensitive operations, described a group of passionate, fearless fighters, both male and female, who share American values and remain loyal partners even after repeated disappointments. The people interviewed held up the Kurdish fighters as a model of a successful partnership in a tumultuous region, with one retired military officer saying the group was one of the few indigenous units the United States has worked with since 9/11 that have earned its trust.

“Both their competence in battle and their commitment to the mission have been proven over and over,” the retired officer said.

All the people interviewed unanimously said they were devastated by the news that the United States is standing aside to let the Turks massacre the Kurdish troops, and more than one expressed a deep sense of shame.

“I feel physically ill with worry and concern and deeply ashamed that my own country would permit this fate to befall our close allies who did all our fighting for us, when we had the power to prevent it,” said a U.S. Marine who served in Syria in 2017-2018.

Ankara considers the SDF an offshoot of the Kurdistan Workers’ Party (PKK), which has waged a three-decade insurgency in Turkey. Both the United States and Turkey have labeled the PKK a terrorist group. But the retired and current U.S. military officers who spoke with Foreign Policy pushed back on Turkey’s characterization of the SDF as a terrorist threat.

“It is unacceptable to turn our back on them to a tyrant like [Turkish President Recep Tayyip] Erdogan, who views all Kurds as terrorists,” the retired officer said. “There will be a whole generation of U.S. military that will never forget this betrayal nor stop apologizing for it.” 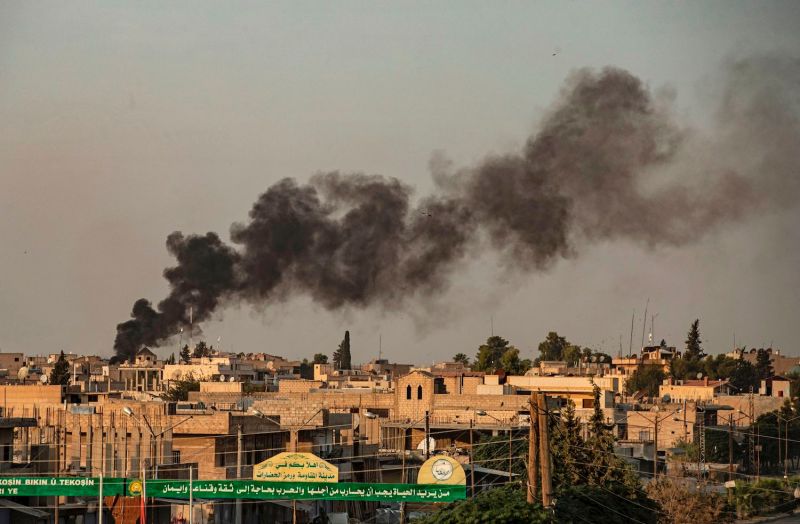 The Army officer who patrolled Manbij described growing close to SDF forces during their time together in Syria, sharing living space and conducting joint patrols. After Trump’s December 2018 tweet, SDF forces were “obviously frustrated” but “insanely understanding” of the U.S. military’s position, the officer said.

During the turbulent weeks after the tweet, American and SDF soldiers stood side by side in Manbij. U.S. troops kept hearing that an order to fully withdraw from Syria was imminent, but week after week commanders said the order had not yet come down, the officer said. Twice during that time period, Turkish proxy forces—which the officer described as a ragtag group of “Islamic gangs”—threatened to cross the border, the officer said.

U.S. and SDF forces experienced a devastating loss on Jan. 16, when a suicide bomber targeted a busy market street in Manbij known to be frequented by U.S. soldiers. The attack killed 19 people, including 15 SDF fighters and four Americans.

“Immediately, the SDF was there. They were helping us in the street even though all this [tension] had happened,” the officer said.

A second Army officer who has worked with many partners since 2001 and spent time on the ground in Syria said the SDF stood out. In the four years since the group was created out of People’s Protection Units (YPG) militia and other regional groups, including Arabs, the SDF has built up an inclusive force of more than 100,000 members, the officer said. It has also established a network of local councils to govern the regions liberated from the Islamic State, building governments that “reflect the populace around them.”

The Kurds provide an “organizational skill that I have never seen before in the Middle East,” the officer said.

The SDF and its political arm, the Syrian Democratic Council, believe in equal rights for women, freedom of speech and religion, and local governance, the officer noted. The group also values education and has a judicial system that is “fair and transparent.”

“This was the first opportunity I have seen to actually achieve our end-state objectives because we had a partner that very closely shares our American values,” the officer said, noting that with the Oct. 6 announcement: “We snatched defeat from the jaws of victory.”

The officer noted the challenges the U.S. military has had in building the Afghan security forces, particularly the high number of “green on blue” attacks that have killed many U.S. service members. By contrast, “I can count on less than two hands” the number of coalition forces who have been killed in Syria over a five-year campaign.

The fighters themselves are “absolutely fearless,” the officer added, describing a force equipped with light machine guns and AK-47 assault rifles—and no body armor. They are “incredibly fair in their heart. … They would rather take casualties themselves than harm a civilian.”

After leaving Syria this year, the first Army officer described holding out hope that the United States would not fully abandon the SDF. But now that hope has been dashed. Hearing the Oct. 6 news that Trump had announced U.S. troops would withdraw from the border, allowing Turkey to move in, the officer said: “I was absolutely crushed.”

The second Army officer reacted with “disbelief” to the White House’s Oct. 6 statement.

“As Turkey attacked, I couldn’t help but feel ashamed, number one, to have been part of it and, number two, that we, America, I believe are violating our values,” the officer said. “America in my mind is still the shining beacon on the hill, but we are not living up to that right now.”

As for the SDF forces the first Army officer got to know in Manbij: “I haven’t been able to get a hold of any of them.”