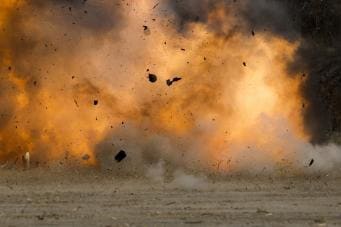 Karachi: Two powerful blasts rocked Pakistan's restive Balochistan province on Friday, killing one person and wounding 12 others, including two police officers, according to a media report.

The blast shook Kharotabad and Khaizi Chowk areas of Quetta, the provincial capital and the largest city of Balochistan.

Due to the twin blasts two police officers, at least one person was killed while rescue officials and many journalists were wounded, Geo News reported, quoting rescue sources.

The injured were shifted to Civil and Bolan Medical College Complex hospitals.

The blasts shook the whole locality and shattered the windowpanes of the nearby buildings.

Balochistan, which borders Afghanistan and Iran, is Pakistan's largest and poorest province, rife with ethnic, sectarian and separatist insurgencies.

On April 18, unidentified gunmen donning uniforms of paramilitary soldiers massacred at least 14 passengers, including Pakistan Navy personnel, after forcing them to disembark from buses on a highway in Balochistan.

In May, three heavily-armed militants stormed the Pearl Continental (PC) Hotel in Gwadar and opened random firing, killing a guard.

Gwadar port is one of the focal points of the USD 60 billion China-Pakistan Economic Corridor (CPEC) with many Chinese workers from other provinces of Pakistan working at the port. China is investing heavily in Balochistan under the CPEC initiative.

Balochistan Liberation Army (BLA), which is fighting Pakistani rule in Balochistan province, has carried out many attacks in the restive region.