* In the Brahui and Balochi languages, the word 'chotok' is used for certain types of water falling from the top 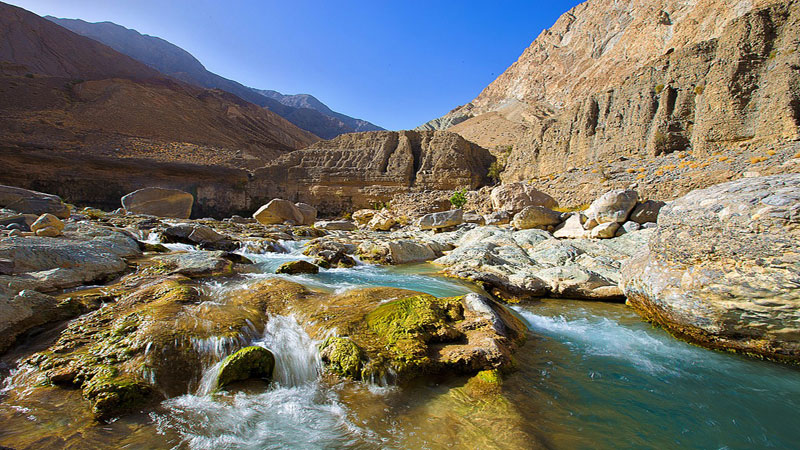 Although Balochistan is mostly comprised of dry hills and desert areas, several places are examples of beauty. One of these destinations is the recent media attention-grabbing entertainment site, Moola Chotok, which viewers see as a hidden paradise.

This amusement site is located in the Moola area of Khuzdar district of Balochistan. In the Brahui and Balochi languages, the word ‘chotok’ is used for certain types of water falling from the top.

There are several big and small waterfalls in Moola Chotok. Because of the waterfall, this area is known as Moola Chotok, the Moola Waterfall.

ROUTES TO GET TO MOOLA CHOTOK — there are several routes to reach Moola Chotok, but two of them pass through the city of Khuzdar in Balochistan. Moola Chatok is approximately 65 km northeast of Khuzdar city.

One way to reach Moola Chotok is Jhul Magsi Road, which is about 20km from Khuzdar town on the RCD highway. A good chunk of this road is paved but its 40km stretch is difficult.

The second route to reach Mulla Chotok is Khuzdar Sukkur Road, which is about 10 km after a rocky path to the left. Only four-by-four vehicles can run on it.

The easiest ways to reach Moola Chotok are through Khuzdar city. Khuzdar is located approximately 300 km southwest of Quetta on the Quetta Karachi Highway, while it is about the same distance from Karachi. Do not make the mistake of traveling in a normal and weak vehicle ahead of Khuzdar, as a normal car can spoil all the entertainment fun.

There are several big and small waterfalls in Moola Chotok. Because of the waterfall, this area is known as Moola Chotok, the Moola Waterfall

Therefore, it is best to rent it from Khuzdar, which is easily available from there.

CARRY THE NECESSARY SUPPLIES —the Moola Chotok should be accompanied by everything you need to get. Since Moola Chotok was previously hidden from the eyes of the people, there is no hotel or other such facilities available from Khuzdar.

The journey, which is roughly six hours long, is full of adventure, but the lack of all the necessities for entertainment can be a hassle.

Because of this situation, take the food prepared for the route with Khuzdar. Since much of this route passes through the rain drains and steep routes, this route is full of constant tremors and swings like a pendulum.

Sometimes ascending and sometimes descending, sometimes due to the car noise trapped between gravel and sand in the river, reached the point where Moola Chotok’s only official rest house is located. Just like the way, one should not make the mistake of not carrying basic items for a stay in the flat or rest house.

Although this area is no less than another recreation of its natural beauty, there is not much accommodation or dining facilities by the government or the private sector. There is a public rest house with five rooms which can be accessed by the concerned authorities, but if people are overcrowded, it may be difficult to stay at night. Therefore, it is best to avoid odds in the hot weather, put the lite tents as well as mosquitoes tents together.

Similarly, if the tourist is more than the food items have to be prepared by themselves. It is important to carry the necessary equipment.

People interested in eating meat and Sajji can get meat from Khuzdar, but if they do not want to do so and want to buy goats or sheep from Moola Chotok, they can buy them from the locals there.

BEAUTIFUL SCENERY OF NATURE —the main feature of Mullah Chotok is its small waterfall.

After a rough six-hour trip on a bumpy road, the physical situation demands that some rest be given, but on the contrary, the advice of the people there is something else.

They say do not rest, but rather go near the first waterfall, which makes it feel like a physical therapy massage.

When the large drops of water falling from the top touched the head and waist, it felt as if no painful journey had taken place. What to say about the beauty of the water, once in the scenes of other waterfalls and in the waterfalls among the big mountains.

Although the path to Mulla Chatok is daunting and difficult to travel, seeing natural beauty, the human being immediately forgets it. The area is not only beautiful but attractive waterfalls are chanting and singing all the time.

The area has become a beautiful and well-known picnic point for tourists. Water is constantly coming down from the height of the waterfall, making it a small pit in front of each waterfall which can be used for swimming.

TOURIST OPINION — the tourists who come here call it a unique place. People who come here say that they have also seen Pakistan and other areas but have not seen an area like Moola Chotok and call it a hidden paradise.

To promote tourism here, the road should be strengthened so that it is easy for people to come here. And one more suggestion is that Rest houses and huts should also be built to accommodate those coming from remote areas. The water here is very clean and mineral water is nothing compared to it. Coming here, one doesn’t believe that he is in Khuzdar or any part of Balochistan but rather one seems to be in Switzerland. People should come here and give the message of beauty to the world. One doesn’t want to go back after coming here.

The writer is a freelancer and a graduate of Punjab University. She works at the Federal Board of Revenue and be reached at canwal.22@gmail.com