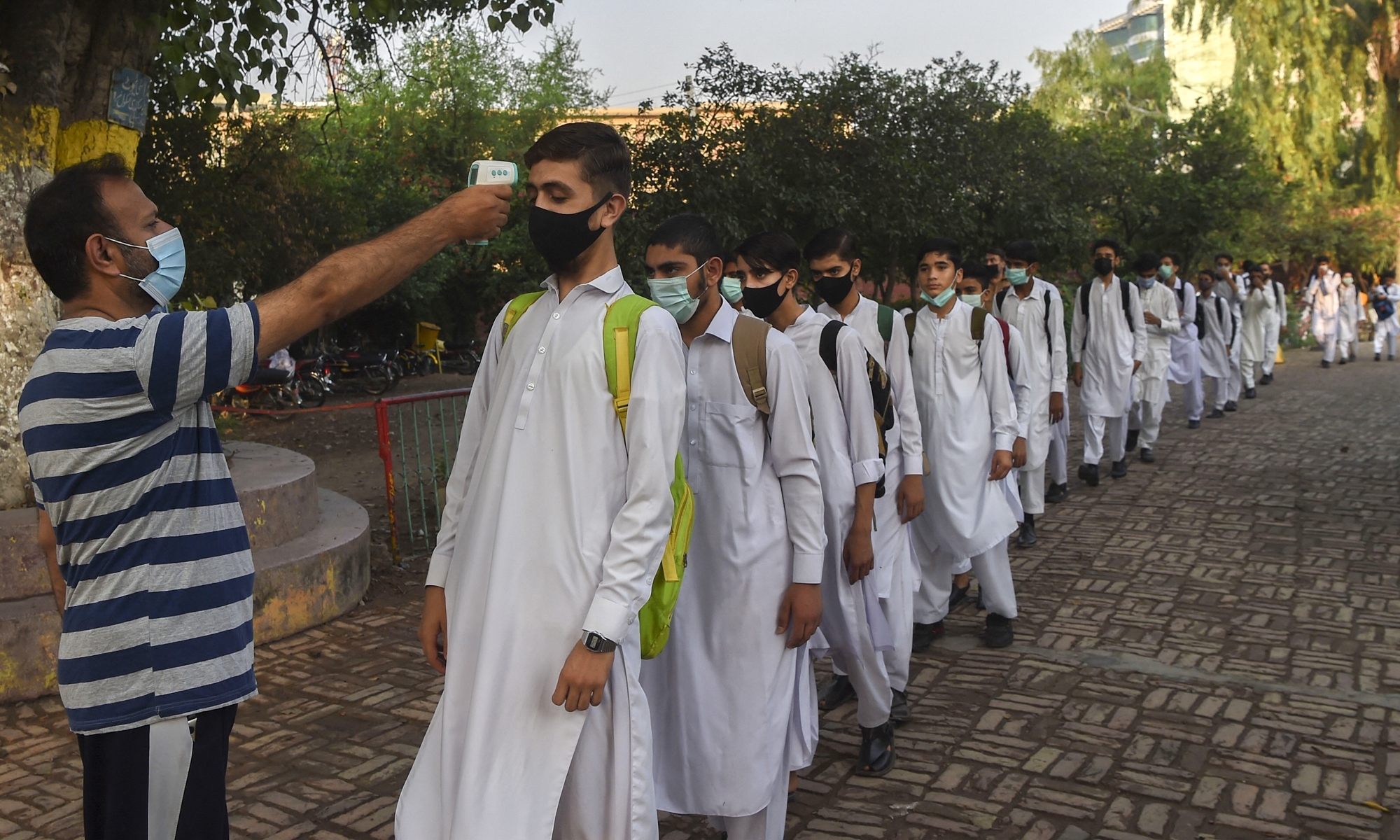 A teacher checks the temperature of a student as others stand in line upon their arrival at a school in Peshawar on Thursday, after the Pakistani government reopened schools closed as a preventive measure to curb the spread of the COVID-19. Photo: AFP

A senior Chinese official called for "high-level" security guarantees for further high-quality development of the China-Pakistan Economic Corridor (CPEC), during a bilateral meeting on the development of the major project under the Belt and Road Initiative (BRI).

At the 10th Joint Cooperation Committee (JCC) meeting of the China-Pakistan Economic Corridor (CPEC), which was held via video link on Thursday, Ning Jizhe, deputy head of the National Development and Reform Commission, China's top economic planner, said that high-quality operation under high-level security guarantees are needed to turn the corridor into a demonstration project for the high-quality development of the BRI.

At the meeting officials from both sides vowed to further promote high-quality development of the CPEC, as five cooperation documents and three agreements were signed.

Under the strong leadership of the leaders of China and Pakistan, the all-weather strategic partnership between the two countries is as solid as a rock and rooted in the hearts of the Chinese and Pakistani people, Ning said.

As a landmark and pilot project for the joint construction of the BRI, many fruitful results involving the corridor have been produced. Over the past eight years, the CPEC has brought in direct investment of $25.4 billion for Pakistan and created many jobs for local communities.

Going forward, Ning said that both sides should closely follow the corridor construction as the center of the relationship, and focus on Gwadar Port, energy, infrastructure construction, and other industry cooperation, including in agriculture, healthcare and digital development.

The meeting, which was delayed partly by the Dasu terror attack, conveyed some very important information about the CPEC's future development pattern, including the new practical move on joint cooperation in information technology, said Liu Zongyi, secretary-general of the Research Center for China-South Asia Cooperation at the Shanghai Institutes for International Studies.