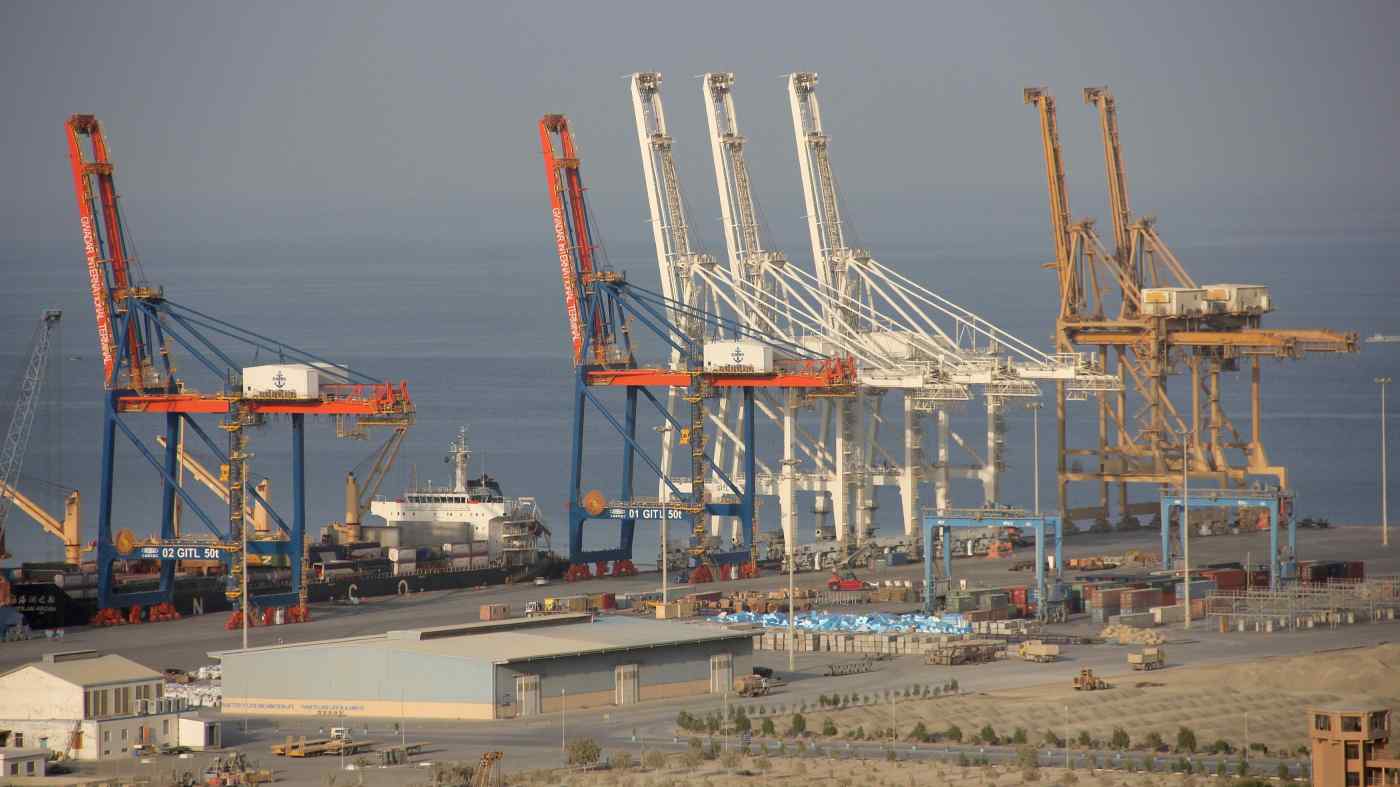 Cranes tower above a wharf at the port of Gwadar, Pakistan, in October 2017. Until the recent decision by Saudi Arabia, the city was being touted as the future "Singapore of Pakistan."   © AP
ADNAN AAMIR, Contributing writerJune 13, 2021 11:00 JST
KARACHI -- Saudi Arabia has decided to shift a proposed $10 billion oil refinery to Karachi from Gwadar, the center stage of the Belt and Road Initiative in Pakistan, further supporting the impression that the port city is losing its importance as a mega-investment hub.

On June 2, Tabish Gauhar, the special assistant to Pakistan's prime minister on power and petroleum, told the media that Saudi Arabia will not build the refinery at Gwadar but will construct it along with a petrochemical complex somewhere near Karachi. He added that in the next five years another refinery with a capacity of over 200,000 barrels a day could be built in Pakistan.

Saudi Arabia signed a memorandum of understanding to invest $10 billion in an oil refinery and petrochemical complex at Gwadar in February 2019, during a visit by Crown Prince Mohammad Bin Salman to Pakistan. At the time, Islamabad was struggling with declining foreign exchange reserves.

The decision to shift the project to Karachi highlights the infrastructural deficiencies in Gwadar.

A Pakistani official in the petroleum sector told Nikkei Asia on condition of anonymity that a mega oil refinery in Gwadar was never feasible. "Gwadar can only be a feasible location of an oil refinery if a 600-km oil pipeline is built connecting it with Karachi, the center of oil supply of the country," the official said. There is currently an oil pipeline from Karachi to the north of Pakistan, but not to the east.

"Without a pipeline, the transport of refined oil from Gwadar [via road in oil tankers] to consumption centers in the country will be very expensive," the official said. He added that at the current pace of development he did not see Gwadar's infrastructure issues being resolved in the next 15 years.

The official also hinted that Pakistan's negotiations with Russia for investment in the energy sector might have been a factor in the Saudis' decision. In February 2019, a Russian delegation, headed by Gazprom Deputy Chairman Vitaly A. Markelov, pledged investment of $14 billion in different energy projects including pipelines. So far these pledges have not materialized, but Moscow's pledge provided Pakistan with an alternative to the Saudis, which probably irritated Riyadh.

Experts agree that locating the refinery in Gwadar was not feasible due to infrastructure gaps and security concerns.

Arif Rafiq, president of Vizier Consulting, a New York-based political risk firm, told Nikkei that a Saudi-commissioned feasibility study on a refinery and petrochemicals complex in Gwadar advised against it. "Saudi interest has shifted closer to Karachi, which makes sense, given its proximity to areas of high demand and existing logistics networks," he added.

Rafiq, who is also a nonresident scholar at the Middle East Institute in Washington, considers this decision by the Saudis as a setback for Gwadar, the crown jewel of the China-Pakistan Economic Corridor, the $50 billion Pakistan component of the Belt and Road.

The Saudi decision "is a setback for Pakistan's plans for Gwadar to emerge as an energy and industrial hub. Pakistan has struggled to find a viable economic growth strategy for Gwadar," he said. Any progress in Gwadar in the coming decade or two will be slow and incremental, he added.

Local politicians consider the shifting of the oil refinery a huge loss for economic development in Gwadar. Aslam Bhootani, the National Assembly of Pakistan member representing Gwadar, said the move is a loss not only for Gwadar but for all of the southwestern province of Balochistan. He said he would urge the Petroleum Ministry of Pakistan to ask the Saudis to reconsider their decision.

The decision has shattered the image of Gwadar as an up-and-coming major commercial hub. In February 2020, the Gwadar Smart Port City Masterplan was unveiled, forecasting that the city's economy would surpass $30 billion by 2050 and add 1.2 million additional jobs. Local officials started calling Gwadar the future "Singapore of Pakistan."

Rafiq said such dreams are unrealistic. "A more prudent strategy [for Pakistan] would be to use the city as a vehicle for sustained, equitable economic growth for Balochistan, especially its Makran coastal region," he said.

Relocating the refinery from Gwadar to already developed Karachi also implies that CPEC, or BRI, has failed to promote Gwadar as a mega-investment hub. "Foreign direct investment in Gwadar will be limited and will remain exclusively Chinese," an Islamabad-based development analyst said, "limiting the city's scope for development."

The refinery decision has once again exposed the infrastructural shortcomings of Gwadar, which Pakistan and China have failed to address in the last six years. Without highways and railways connecting it with northern Pakistan, the city will never develop as its proponents hope