The roads for sea access seem to run through China. 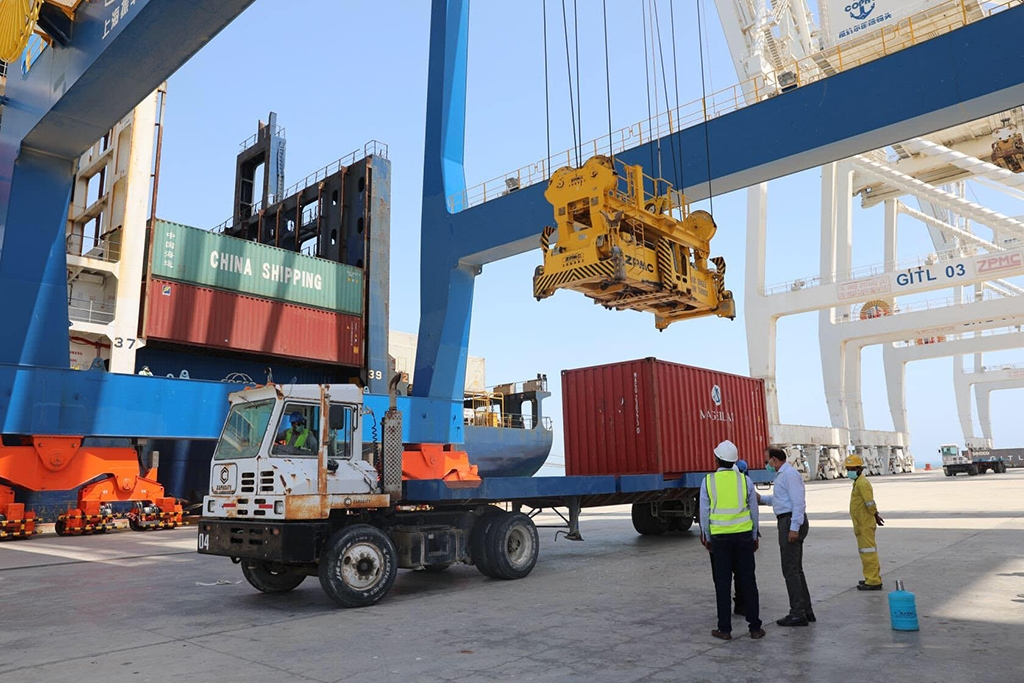 Gwadar: Over the hills and far away (President of Pakistan/Facebook))

A top trade priority for Central Asian leaders is access to a warm-water port. Whether they succeed any time soon appears to depend heavily on China.

Policy changes and new infrastructure are already easing Central Asia’s comparative isolation from world markets. But the lack of cost-efficient access to a deep-water port remains a major impediment to export growth. Projects in Pakistan and Iran represent two possible solutions to the port conundrum, but both options are saddled with complicating factors that raise questions about their viability.

Since China launched its Belt and Road Initiative (BRI) in 2013, Central Asian trade officials have expressed high hopes for the completion of a China-Pakistan Economic Corridor (CPEC), which has a price tag ranging as high as $50 billion. If fully implemented, CPEC could eventually connect Central Asian markets to the port of Gwadar in Pakistan near the Pakistani-Iranian border.

While Gwadar has been touted as a key part of the BRI, China’s involvement in the port predates the announcement of the grand infrastructure plan. Pakistan ceded managerial control to Chinese Overseas Ports Holding Limited in 2013 after China financed approximately 80 percent of the initial development cost. But the port project can’t operate in a vacuum; improvements to widen access to the facility are still needed. Planned Chinese investment in city infrastructure was estimated at $4.5 billion in 2016.

Given its location in a geopolitically sensitive area, Gwadar has received consistent media attention and hype about its economic potential. But the facility so far has struggled to evolve into a major trade hub, with virtually no regular cargo vessel traffic at present. Among the factors depressing Gwadar’s potential is instability in surrounding areas of Balochistan, the scene of a low-intensity insurgency. The development also has faced criticism for marginalizing the local Baloch population.

Nevertheless, Gwadar continues to receive a steady stream of diplomatic visitors, including a recent delegation of Uzbek officials seeking opportunities for cotton exports. The United States has portrayed Gwadar as a possible debt trap for Pakistan. Yet in early April, the U.S. chargé d'affaires, Angela Aggeler, visited the port in an attempt to promote U.S.-Pakistani trade relations.

Less discussed, but equally important for Central Asian exporters, is a joint Indian-Iranian project at Chabahar on the Gulf of Oman, some 200 kilometers to the west of Gwadar. Despite India’s uncertain diplomatic relationship with Iran, it has aggressively pursued the development of Chabahar as a container port. India delivered a second set of heavy cargo handling equipment in early March, having delivered the first harbor cranes in January. India’s stake in Chabahar has been portrayed as a countermove to China’s Gwadar involvement since at least 2012.

So far, the United States has not significantly interfered with India’s investment in the Iranian economy, in part because the port handles economic assistance destined for neighboring Afghanistan. While Iranian media have asserted that U.S. sanctions are hindering the port’s development, the facility is grappling with an array of additional constraints.

For one, a lack of rail access hampers Chabahar’s ability to serve as a gateway to Central Asia. More broadly, geopolitical factors are working against Chabahar, namely the ongoing tension with the United States and European Union over Tehran’s nuclear program, as well as China’s interest in the rival Gwadar project.

Iran and India had originally sought to jointly develop a rail connection linking Chabahar to the Afghan border at Zahedan, but India has thus far not participated in the project. Even if that line gets up and running, for Central Asian exporters to benefit a Chabahar-Zahedan route would need to eventually connect to the emerging Mazar-i-Sharif-Herat railway before linking to the Uzbek rail network. As it currently stands, the difficult terrain and lack of a viable rail connection leave Chabahar as functionally isolated from Central Asian production centers as the Russian seaports that currently handle Central Asia’s modest seaborne export volumes.

In addition to potentially creating a more efficient hub for cargo moving to and from South Asia, Chabahar has an important security dimension for Iran, noted Mehdi Azimi, who teaches courses on maritime security at Texas Southern University: The port would make Iran less dependent on the precariously narrow Strait of Hormuz and would provide a relief valve should political relations with Iran's southern neighbors deteriorate. This is also a consideration for Central Asian trading partners who would need assurances that at least one route to the sea would always remain open before embarking on major connectivity investments.

Chabahar’s potential lies in solid bulk and containerized imports. Import tonnage in 2020 was eight times export volumes. This is the inverse of Iran’s largest port terminal, Bandar Abbas/Shahid Rajaee, which is dominated by export flows. Iranian media now report that Chabahar will become “fully operational” by the start of summer. Current port infrastructure is only sufficient to handle low volumes; a recent analysis showed that from March 8-30, only six cargo vessels arrived at the port.

Even prior to the pandemic, Iran’s annual container volume at all ports was only 2 million twenty-foot equivalent containers (TEUs). By comparison, the Saudi port of Jeddah alone handles 4 million TEUs. Modern container ports require substantial economies of scale to support capital investments. Without a major change in Iran’s current economic and tariff structure, there is little reason to think that domestic demand alone could justify a second major container port.

While Chabahar’s tonnage volume could be sustained over the medium term with bulk freight transfers to Afghanistan, these shipments are unlikely to generate the types of profits that can fund major capital improvements, including crane capacity, channel maintenance and rail connections. Developing Central Asian transit trade is perhaps the clearest way forward for Chabahar to establish the economies of scale necessary to realize its original vision, including the completion of a dedicated container terminal by 2024.

This is where China, along with the United States, comes in. If China views Chabahar as a threat to Gwadar’s success, as it most likely does, it has many tools at its disposal to undermine the project. For Washington's part, while it has not objected to India’s investment in Chabahar so far, the U.S. stance is conditioned on the port’s current role as an access point for relief shipments to Afghanistan. If Chabahar ever were to gain traction as a conduit for Central Asian trade and a major source of revenue for the Iranian government, Washington’s willingness to exempt the project from sanctions could quickly change.

Ultimately, the Gwadar-Chabahar competition could end up being a lose-lose proposition for would-be Central Asian exporters. China could well act to scuttle Chabahar, but at the same time not provide enough ballast to get Gwadar on an even keel.

Nathan Hutson is a professor at the University of North Texas. He is a specialist on China’s Belt and Road Initiative and previously worked as a consultant for the World Bank.