Hundreds march in Balochistan over killing of Karima Baloch 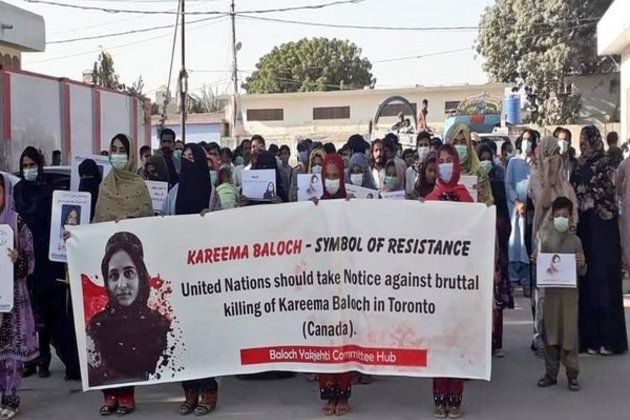 Balochistan [Pakistan], December 23 (ANI): Protest rallies were carried out in different cities across Balochistan on Wednesday against the killing of prominent leader and activist Banuk Karima Baloch in Canada. Hundreds of people including activists gathered in various places in Quetta and Hub City demanding a fair probe by the Canadian government into Karima's sudden death.

Karima, a vocal critic of the Pakistan Army and government atrocities in Balochistan, was found dead in Toronto. The 37-year-old Baloch activist had arrived in Canada in 2016 and campaigned extensively against disappearances and human rights violations in the troubled Balochistan province.

"Quetta, Balochistan: Hundreds of men and women are protesting against the killing of Karima Baloch, a political and human rights activist. Protesters demanding from the Canadian government to conduct a transparent investigation," Fazila said in another tweet.

The Balochistan Post reported that locals in Hub Chowki, turned out in huge numbers to protest against the "murder" of the Baloch leader.

Meanwhile, friends and fellow activists in Canada and other places across the world expressed their dismay over Karima's sudden death and are refusing to accept that it was an accident.

Lateef Johar Baloch, a friend and another activist who lives in Canada revealed that Karima was being threatened with messages that said: 'We will send a Christmas gift to Karima she will never forget', Toronto Sun reported.

"We can't believe or accept this was an accident," said Lateef Johar. "Her husband showed me the messages."This sharp reaction comes after Toronto Police said that "The circumstances have been investigated and officers have determined this to be a non-criminal death and no foul play is suspected."Besides Lateef, another activist Hakeem Baloch has demanded a thorough investigation into Karima's mysterious death, saying that the political and human rights activist in Canada was receiving life threats and abusive messages on her social media accounts.

Hakeem, who is the President of Baloch National Movement UK Zone, who is also her close friend, called her a brave woman who wouldn't commit suicide.

"She received many threat calls on her social media accounts, abusive messages, and comments that's something which shows the mentality of the enemy of the Baloch nation," said Hakeem.

"Statements from her family and close friends have revealed that they don't believe, and the Baloch nation doesn't believe that she has become a victim of an accident or it was an act of suicide because she was a brave lady, she was a brave heart lady, she was the hope for hundreds and thousands of Baloch. She was leading millions of Baloch. She was a symbolic character for Baloch women in the history of Baloch politics and with all those commitments, with all those greatness and along with them the sacrifices she made, the sacrifices her family made, no one can believe that this was an act of suicide," Hakeem Baloch told ANI. (ANI)