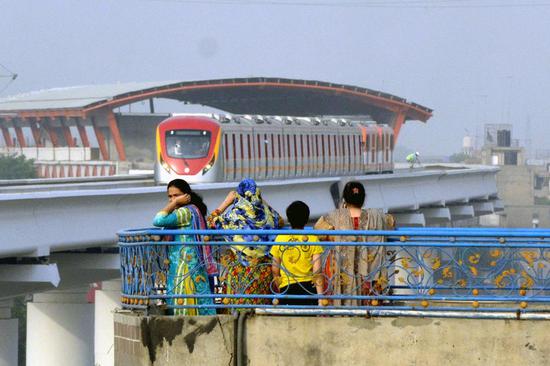 Pakistan's Orange Line Metro Train project in the country's eastern city of Lahore under the China-Pakistan Economic Corridor (CPEC), was completed and delivered to the Pakistani side on Friday, according to the joint venture that is responsible for the implementation of the project.

As an early-harvest project of CPEC, the Orange Line metro train service in Lahore, the capital city of the country's Punjab province, is Pakistan's first-ever mass rapid urban transit train service, and the project is built by a joint venture of China State Railway Group Co., Ltd. and China North Industries Corporation.

With a total investment of around 1.6 billion U.S. dollars, the construction work of the Orange Line project started in September 2015, and the project is expected to be put into commercial operation soon.

Wang Yunlin, executive deputy general manager of the Orange Line project, told media that despite the COVID-19 epidemic and tight construction schedule, the metro train project was successfully completed and delivered, which is the fruit of the collaborative efforts of the Chinese and Pakistani employees.

Over 2,000 local people were employed at the peak of the project's construction, he said, adding that the traveling of local people will be greatly improved after the project is put into commercial operation.

According to the joint venture, the length of the Orange Line project is 25.58 km, and the project has 26 stations including 24 elevated stops and two underground stations, connecting several densely-populated areas of Lahore. A total of 27 sets of trains will be put into use which are expected to provide traveling service for 250,000 passengers daily, at the early stage of the commercial operation. Enditem