By developmentreimagined
Posted October 8, 2020
In analysis, infographic
In order to mitigate the ongoing impact of COVID-19, it will be essential to reignite growth – in particular trade, finance and people flows to, from and between African countries. Much of these flows rely on increased infrastructure and connectivity, as well as local manufacturing, which is often provided by Chinese partners, either in the form of government loans or foreign direct investment (FDI – i.e. private sector finance). Yet, with both forms of finance can come an increase in Chinese workers, which can negate local benefits, especially in the context of high unemployment in many African countries.

According to the China-Africa Research Initiative, the number of Chinese workers that went to Africa by the end of 2018 was 201,057, a decline by 1,632 from 2017. Critics have argued that Chinese companies prefer to employee Chinese workers, depriving locals of jobs and for those they do hire, training and promotion prospects are limited. Yet, country-specific research conducted by SOAS in 2019 and McKinsey in 2017 (Dance of the Lions and Dragons) has highlighted that Chinese companies do employ just as many local workers as non-Chinese companies, pay them more or less the same and train them to similar standards, though often through less formal channels.

But, what does the comprehensive, Africa-wide data tell us? And what does it tell us about ‘why’ – are changes and differences in volumes of Chinese workers due to Chinese or African policies? Or a combination of both? What is the outlook for the future?

To explore this in a systematic way, The Oxford China International Consultancy (OCIC), together with Development Reimagined, have conducted some innovative analysis and produced a series of infographics (download here) to share the real story behind Chinese localisation trends across Africa.

In recent years, Chinese workers have declined across the continent. From the data we have good reason to believe the volume of China’s loans are a key reason for this. 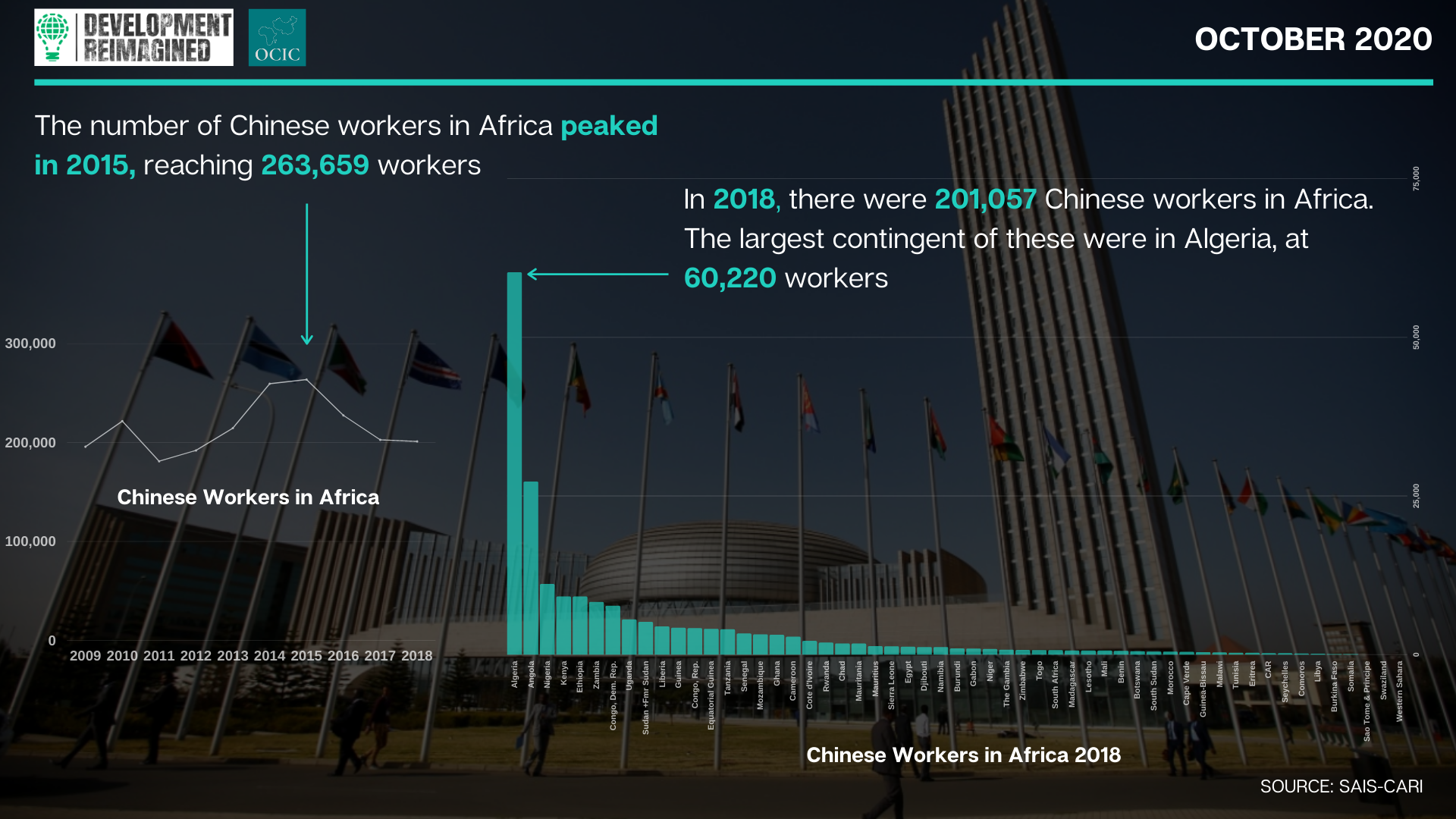 Our analysis shows that numbers of Chinese workers in Africa peaked in 2015 – the same year that contract revenues and loans from China peaked. The latter are now down to pre-2012 levels. Overall, China-Africa FDI, contract revenues, loans and Chinese labour have moved proportionally over time.

Interestingly, and as an aside, the data also highlights that Chinese contract revenues seem to be more dependent on Chinese loans than ever before, as opposed to loans from other bilateral partners or multilateral development banks. We can infer that this is happening for three possible reasons: Either Chinese Companies are not winning as many of the non-Chinese international contracts as they did previously – perhaps due to changes in value for money; or fewer loans from non-Chinese sources are available; or Chinese contractors are being excluded from the international contracts. However, this is beyond the scope of this research, and requires separate analysis. 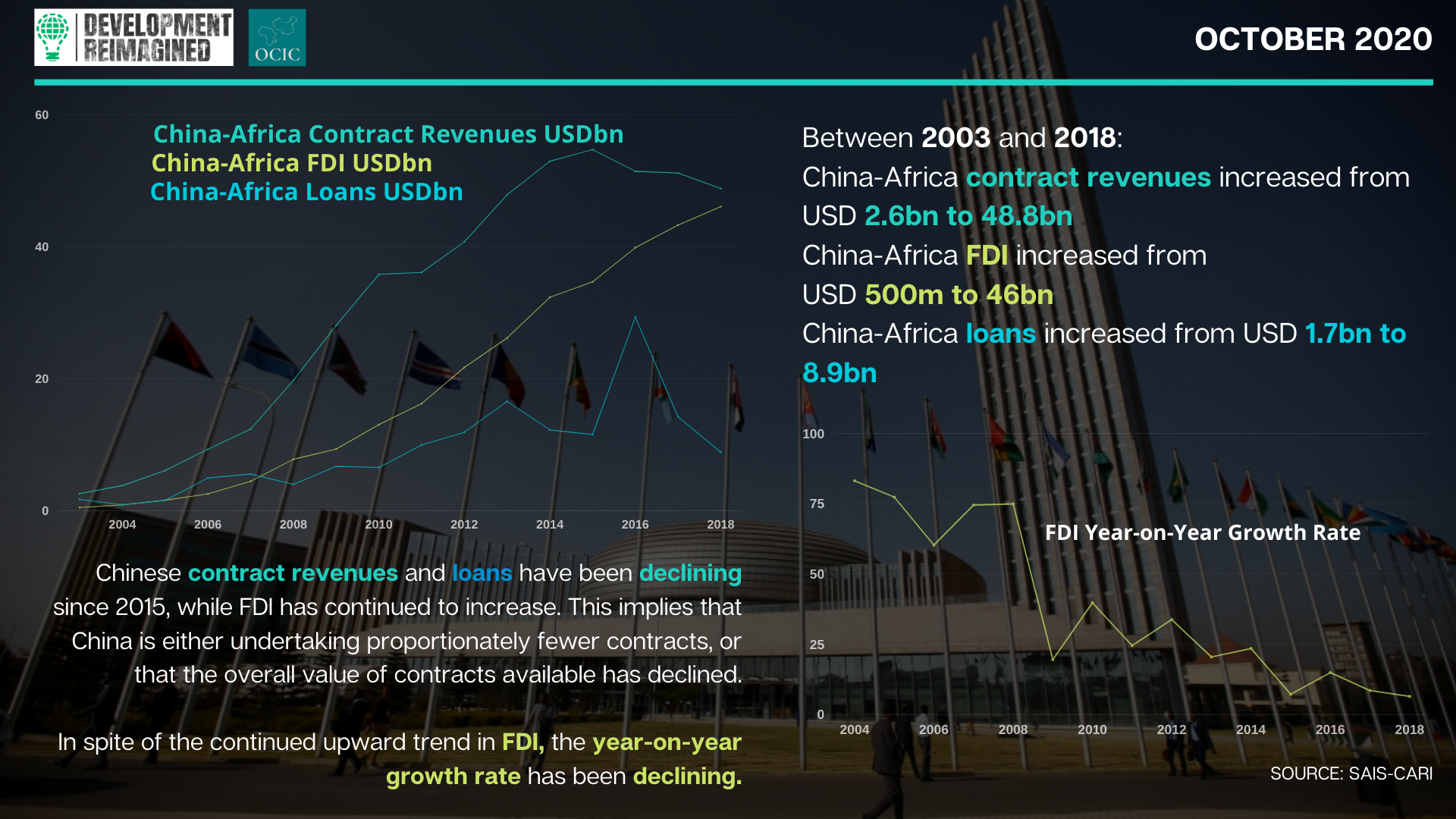 Another piece of evidence from our analysis are correlations at country level. We find a strong association between the countries with high levels of FDI, contract revenues, loans and Chinese workers– i.e. countries where there are projects (loans or revenues), DO have more Chinese workers. 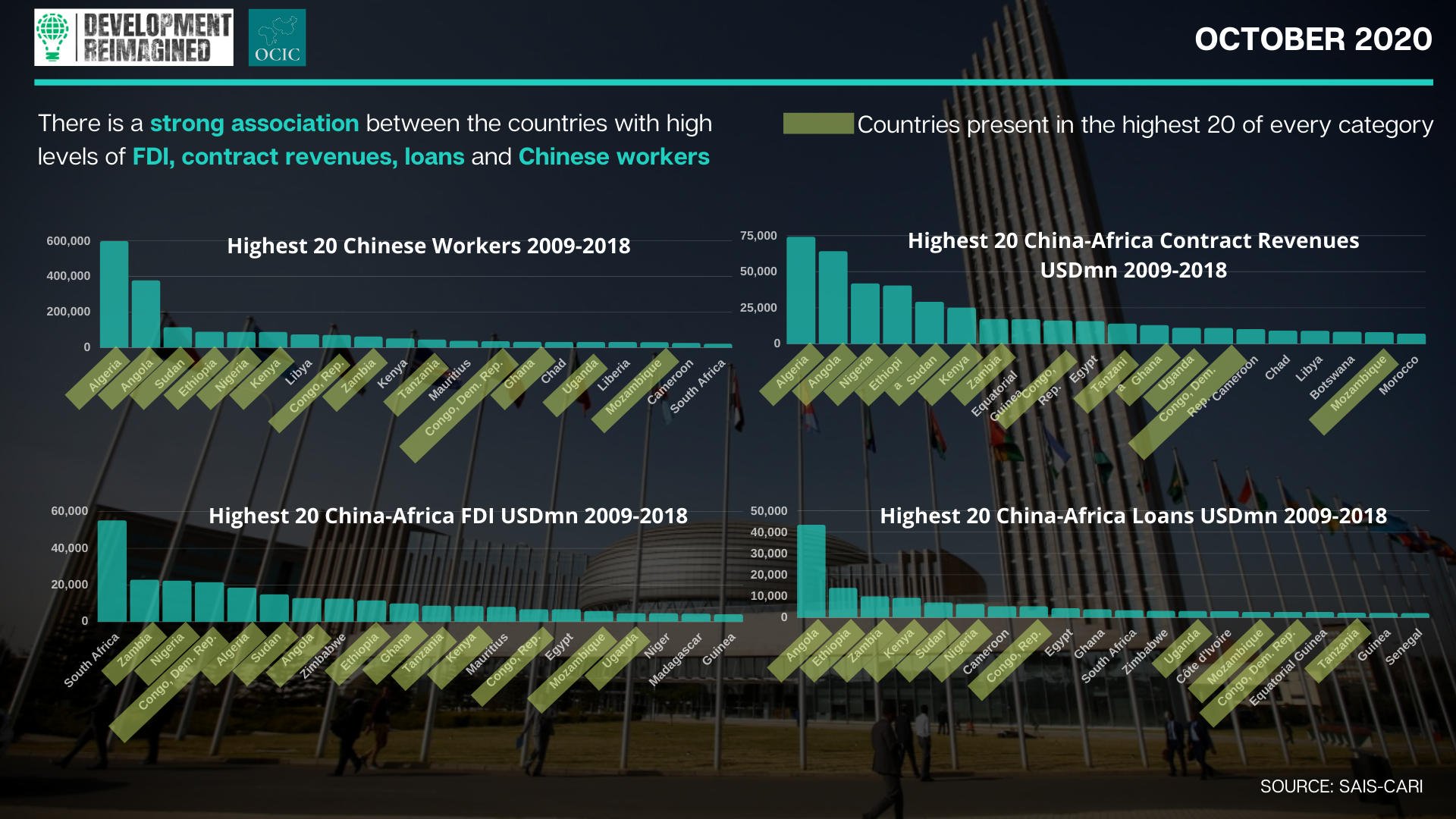 2. The numbers of China’s workers in Africa could be changing because of the types of project financed by China

The data also suggests the volume of Chinese workers could be changing due to changes in the type of projects financed by China. Different types of projects have different levels of “labour intensity” and complexity, and therefore need different degrees of Chinese versus local expertise and as a result have an impact the overall volume of Chinese workers. Since, 2011 the dominant industry receiving Chinese loans is ‘transport’ and this has continued to rise. In addition, ‘communication projects’ have been on the rise since 2010, with ‘mining projects’ experiencing less growth over time. 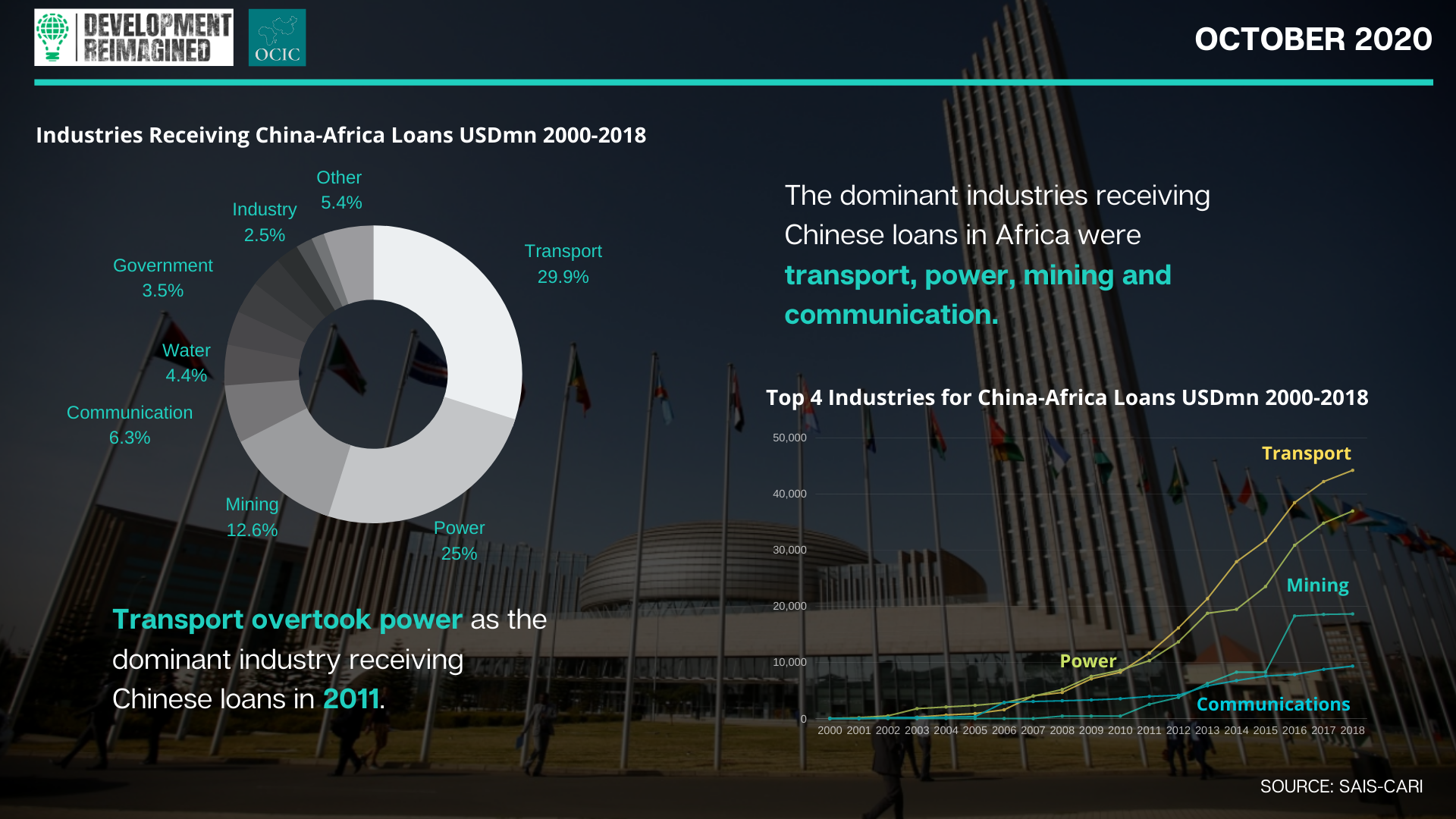 3. The numbers of Chinese workers in Africa changes depending on African policies

Our analysis also suggests that labour policies across Africa do have an impact how many Chinese workers are in the country.

In order to explore this question, we first separated countries into 4 categories depending on their labour policies – ‘Strict’, ‘Targeted’, ‘Moderate’ and ‘Relaxed’.  There were 10 out of the 55 African countries that we could not get sufficient data on – so we created a fifth “limited information” category.  This is the first time we have seen African countries categorized for their labour policies in a clear manner. 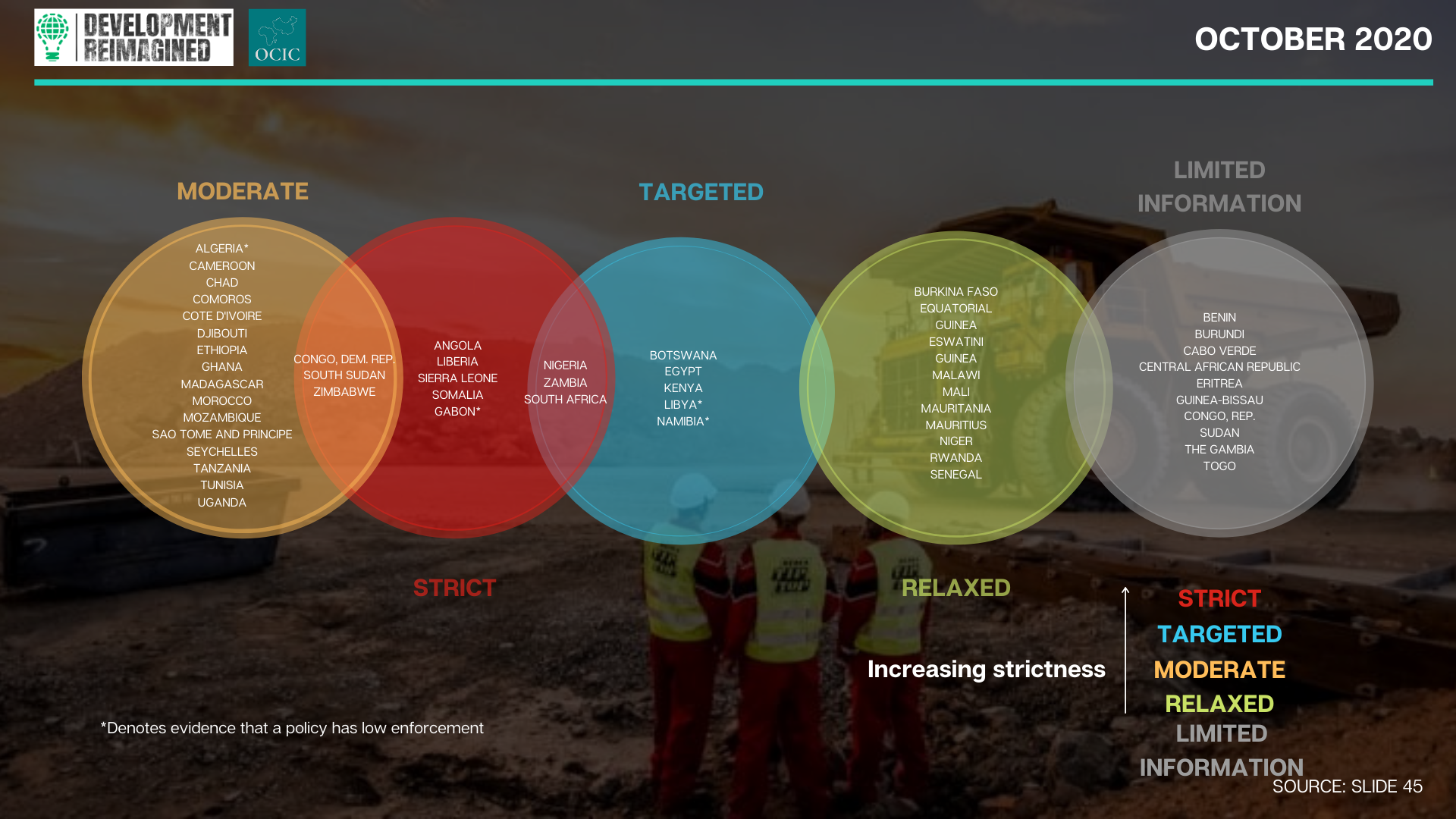 We then used these categories to explore whether – as theory might suggest – countries in the strict and targeted categories, had less Chinese workers than those with moderate or relaxed policies. We adjusted this for the volume of development finance to the countries. We also used the analysis to explore whether – as some development theories suggest – stricter labour policies appear to deter interest from Chinese development partners – especially when it comes to FDI. 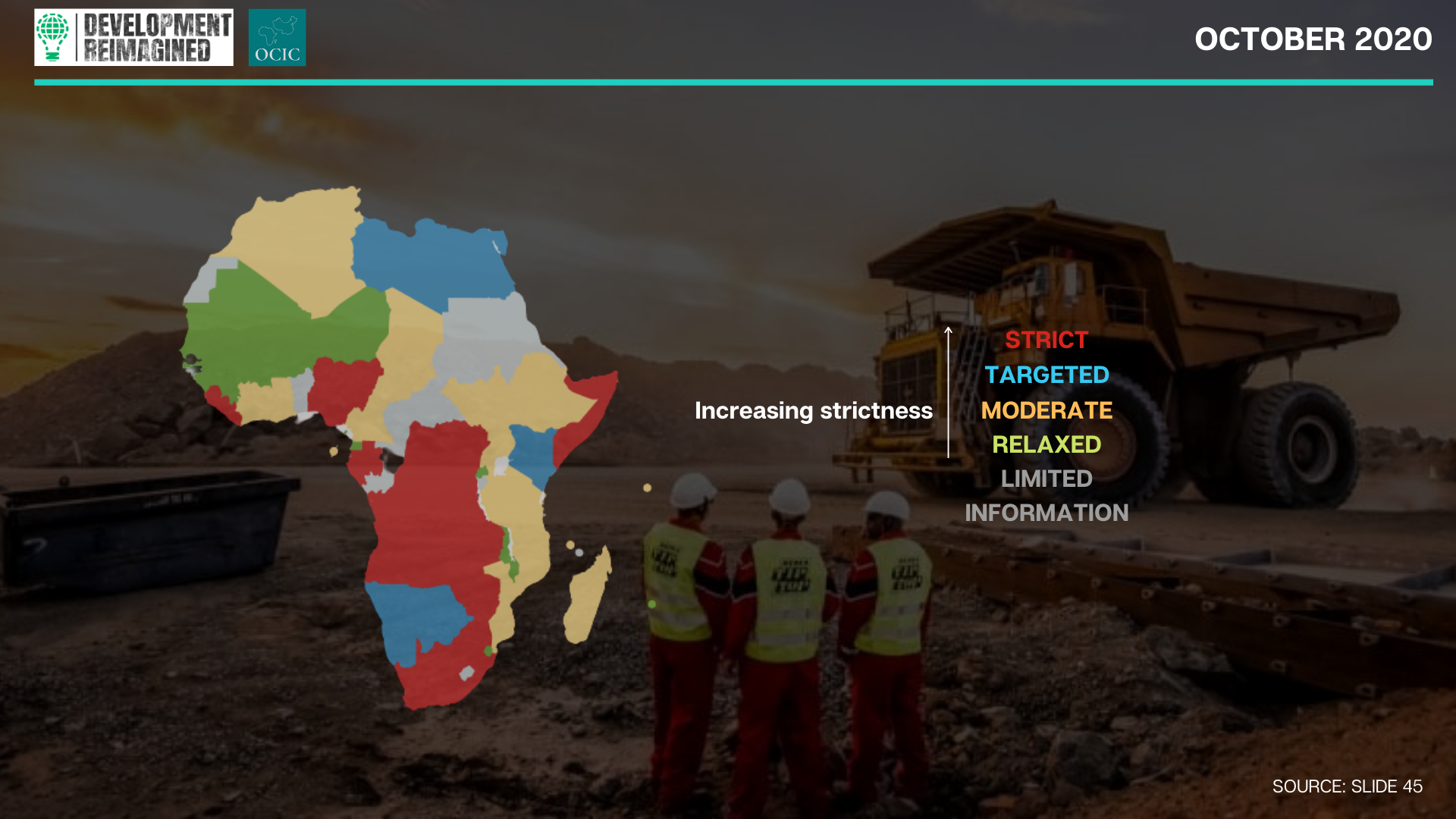 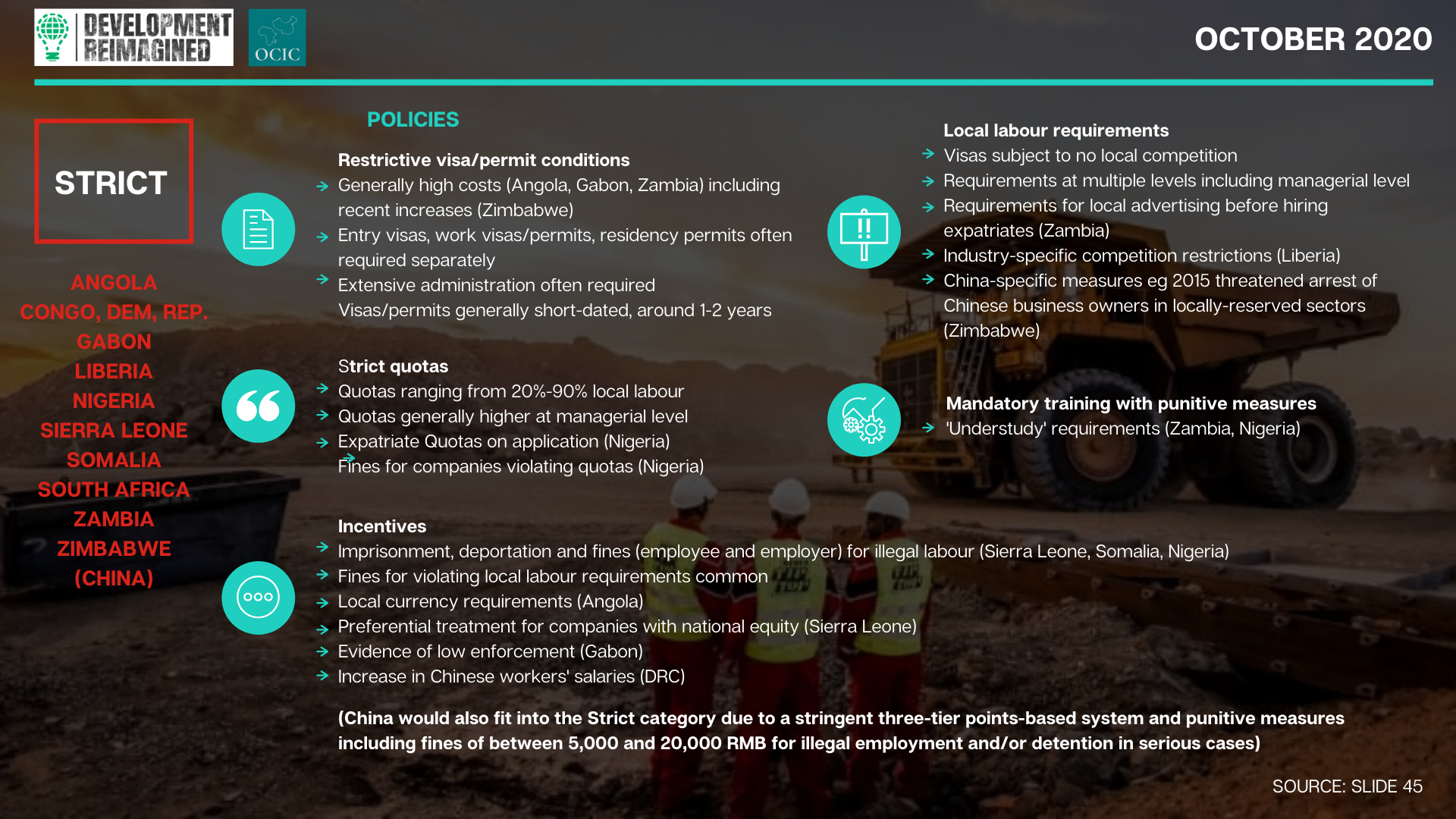 Second, and importantly for the future, the data suggested that Chinese loans and FDI are not deterred by stricter labour policies. Indeed, Chinese loans and FDI appear to be fairly agnostic to labour policies – perhaps because China itself has very strict foreign labour policies, therefore Chinese firms are used to this and respect this. China’s foreign policy also does not attach conditions to loans or investment into other countries. Indeed, if the data has any implication, it is that Chinese development finance is more attracted to countries with strict and targeted policies, as perhaps it implies that these governments are more proactive. 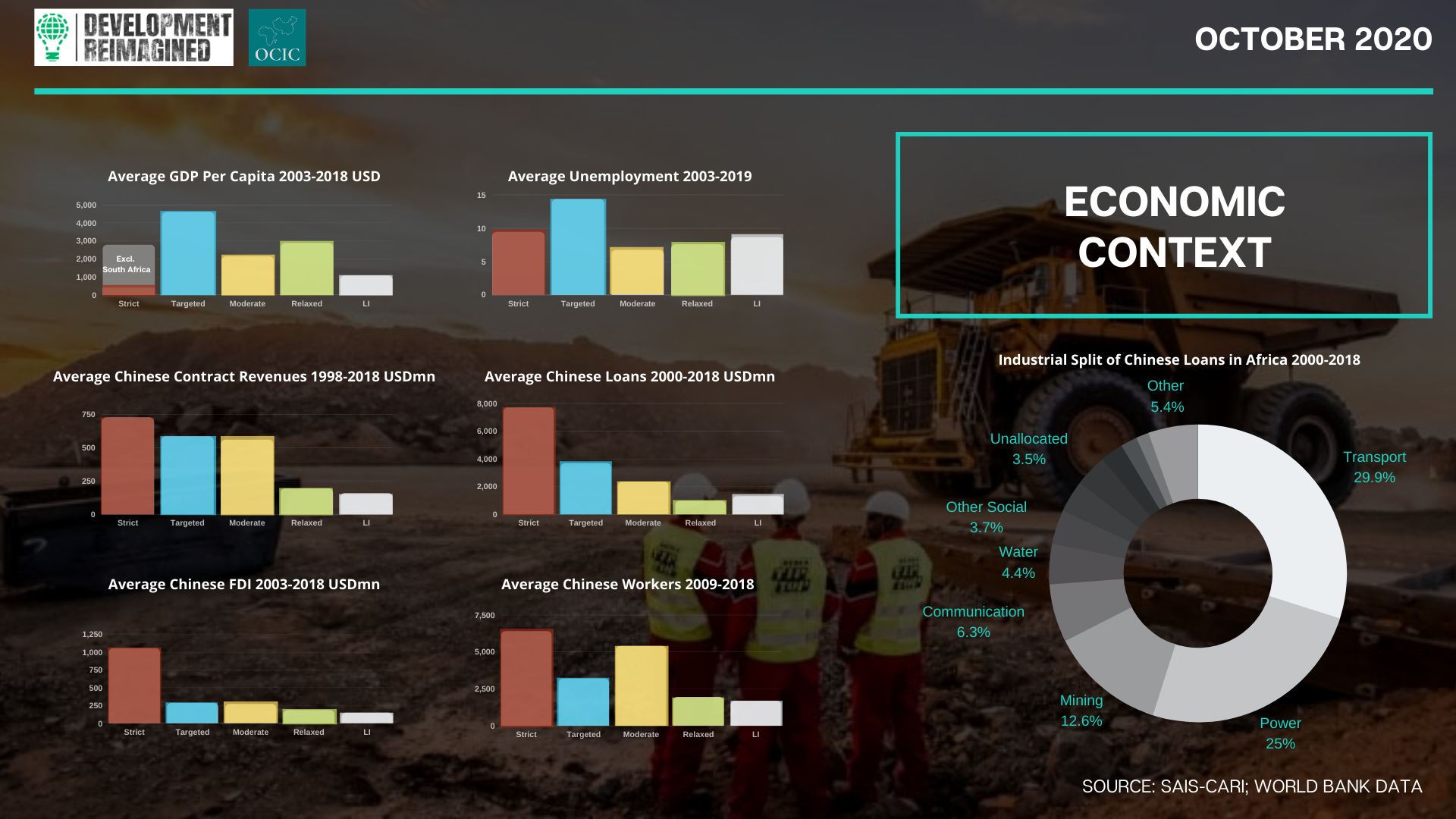 4. The reality is a combination of both African and Chinese drivers determine the numbers of Chinese workers in Africa and their impact

While this is the first time anyone has attempted this kind of cross-country analysis, it is revealing and important for countries trying to simultaneously create jobs, invest in infrastructure through loans, as well as attract FDI.  The findings imply that countries do not have to trade these objectives off, at least when it comes to China, and they can use labour policies as a means to manage their multiple development objectives.

Furthermore, the impact of Chinese FDI and Chinese workers on African economies and labour markets is not uniform.  In particular, those countries ‘most affected’ by Chinese investment and workers relative to their economies are not necessarily those with the highest total levels in absolute terms. For instance, over the last 15 years, South Africa, Zambia and Nigeria have received the most Chinese FDI in value terms on the continent, but as a contribution to their economies, only Zambia features in the top three.  Chinese FDI into the Seychelles, Zambia and the Republic of Congo has accounted for the equivalent of over 10% of their economic size. 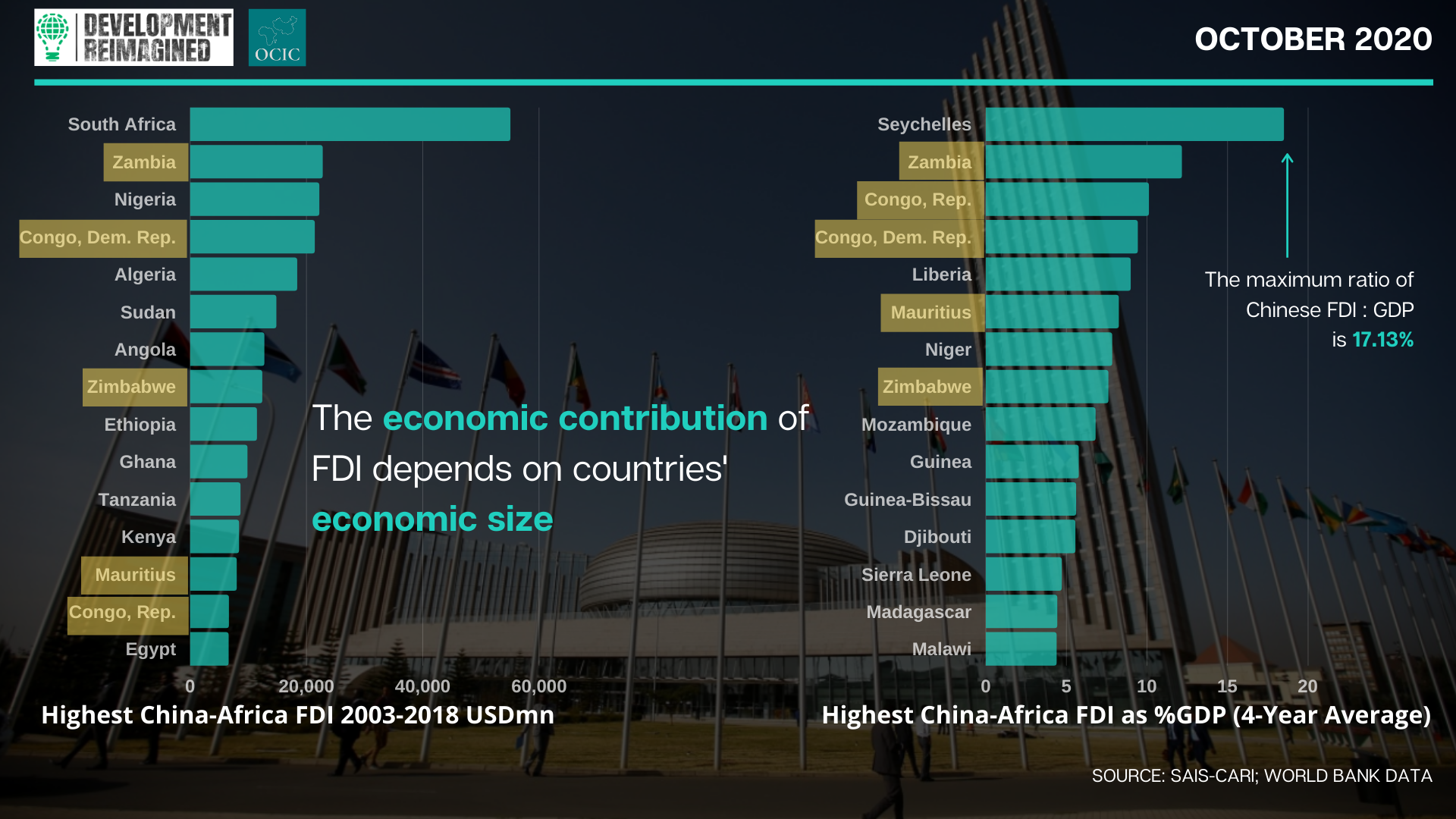 On the other hand, there is no African country for whom Chinese workers have made up more than 0.5% of their population, so the question of localisation must be put into context. 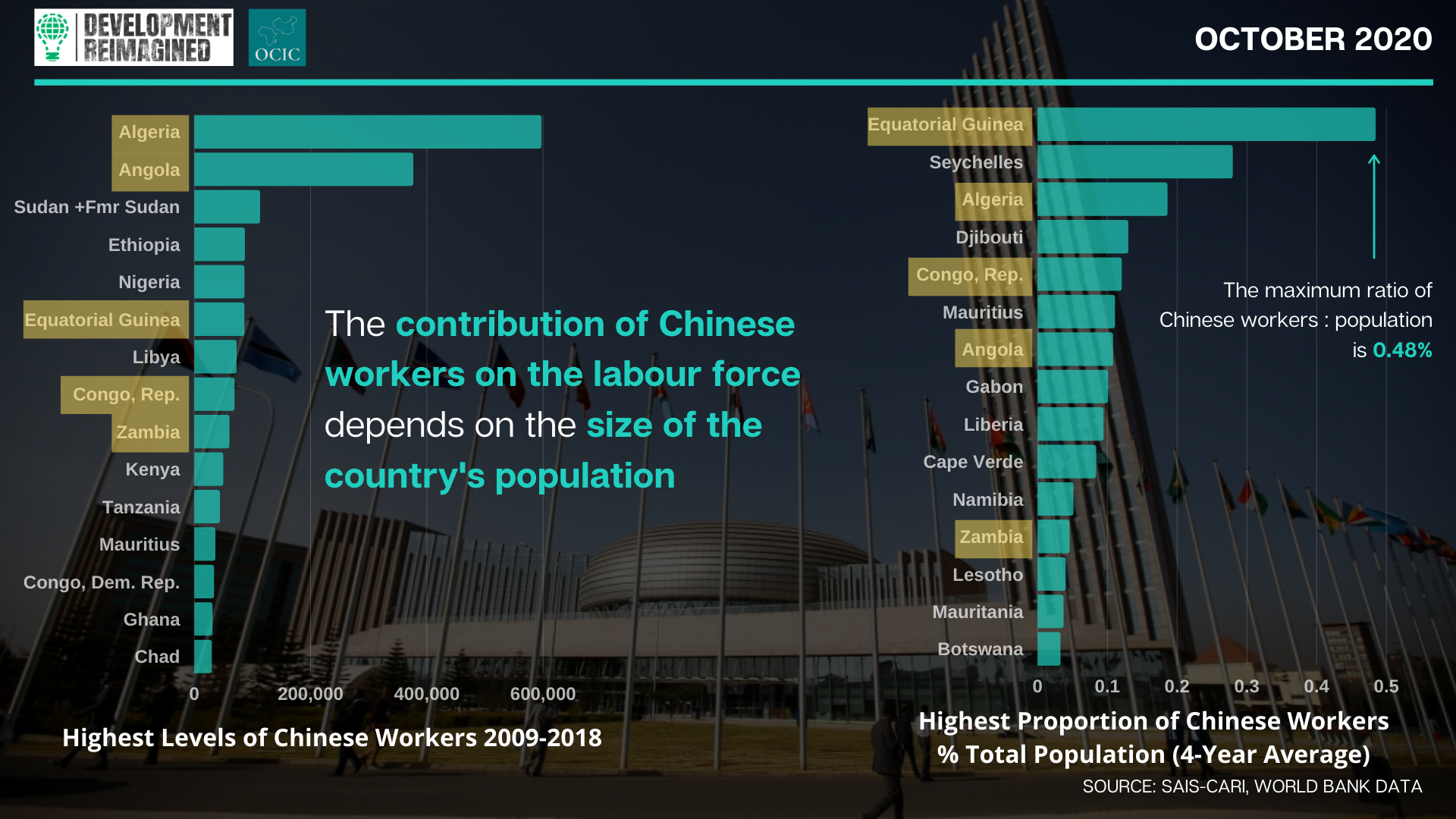 This means that African countries need to tailor their labour policies and FDI attraction policies vis-à-vis- China to their own economic priorities. Our analysis suggests there is no one-size-fits-all.

So, what does this mean for the future, especially as Africa’s overall development finance needs continue to rise to meet poverty reduction and climate change goals?

Despite international narratives of debt distress, African infrastructure needs in transport, power and communications continue to be massively underfinanced – and COVID-19 only increases this urgent need for financing.

Therefore, there are two important takeaways for African and Chinese stakeholders in particular to consider from our analysis:

* Development Reimagined would like to thank the team at Oxford China International Consultancy, especially Charlotte Baker, for research and analysis