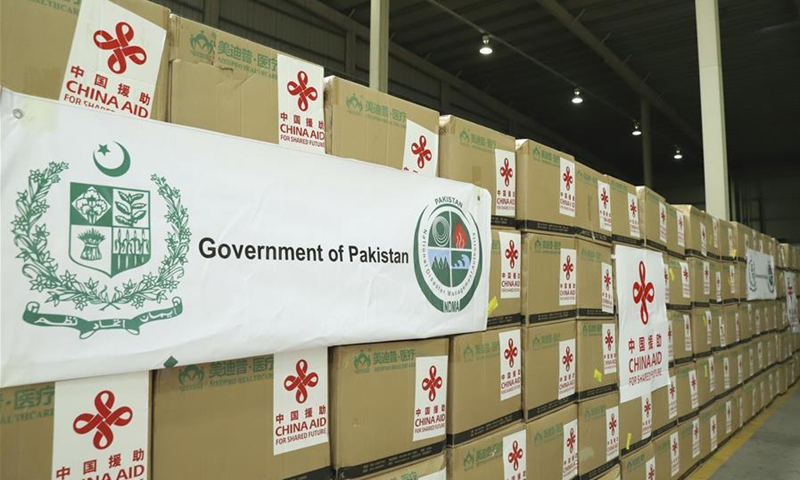 Photo taken on June 16, 2020 shows the medical supplies donated to Pakistan from the Chinese government at the Islamabad International Airport, near Islamabad, Pakistan. The Chinese government on Tuesday donated the sixth batch of anti-COVID-19 medical supplies to Pakistan at the Islamabad International Airport to help the country fight against the pandemic. Photo: Xinhua

China and Pakistan are expected to discuss their joint response to challenges caused by COVID-19, accelerating the construction of the China-Pakistan Economic Corridor (CPEC) as well as other regional and international issues during the second strategic dialogue between the foreign ministers of China and Pakistan that will end on Friday, Chinese analysts said.

Chinese analysts also called on India to be more open and drop its "narrow-minded" mentality following the positive cooperation between China and Pakistan; after India, in an attempt to divert attention from its failure in responding to COVID-19, decided to stir up trouble with the two countries throughout past months.

This strategic dialogue is highly relevant and significant as the two sides will hold in-depth exchanges of views on anti-epidemic cooperation, bilateral relations and regional and international issues of common concern, Zhao Lijian, spokesperson of Chinese Foreign Ministry, said at Thursday's media briefing.

As the regional and international landscape progresses through complex changes — in particular due to the profound global impact of COVID-19 — China and Pakistan, as "all-weather" strategic cooperative partners, need to further strengthen their communication and cooperation to deal with external challenges and achieve greater development, Zhao said.

Qureshi called his visit to China a "very important trip" before his departure, and the Foreign Office of Pakistan said in a statement that the visit will be important in further strengthening Pakistan-China's "all-weather" strategic cooperative partnership and deepen strategic communication and coordination with China on a range of issues, according to Pakistani media reports.

Fu Xiaoqiang, an expert on South Asian issues at the China Institutes of Contemporary International Relations, told the Global Times on Friday that China has been coordinating with neighboring countries to jointly tackle economic and other challenges posed by the COVID-19 pandemic. As such, coordination between China and Pakistan — two "iron brothers"¬ — in terms of economic and strategic cooperation is very important at this current moment.

The COVID-19 pandemic caused some delays to projects under the CPEC, and the two sides are likely to adjust the speed of delivery and come up with practical suggestions to further advance the CPEC, Fu said.

Earlier in August, the Executive Committee of the National Economic Council of Pakistan approved the Main Line-1 (ML-1) project involving the upgrade of the railway track between Karachi and Peshawar — one project under the CPEC.

The Pakistani Minister for Railways Sheikh, Rasheed Ahmad, said on Thursday that the ML-1 railway project will prove to be a milestone in the country's development journey, as it would boost industrialization and create new opportunities for locals.

The dialogue also attracted much attention from India's media outlets, with some saying that fraught ties with India will be a "key topic" of the dialogue.

The Hindustan Times said Pakistan and China are looking to strengthen their ties while they deal with worsening relations with India.

"India has adopted a hostile attitude toward the cooperation between China and Pakistan and believes that China and Pakistan will soon unite against India; it's a rather 'narrow-minded' perspective that does not conform to India's position of a big country in South Asia," Fu said.

India has stirred up trouble with its neighboring countries in the past few months due to the government's need to shift public attention from its failure to respond to COVID-19, but regional countries should work together to avoid such situations, Fu said.

China's coordination with neighboring countries comes amid tense China-US relations, and Fu stressed that China's purpose was not to force neighboring countries to "pick a side" between China and the US, but strengthen cooperation to tackle joint challenges, contributing to a more stable and prosperous region
https://www.globaltimes.cn/content/1198449.shtml