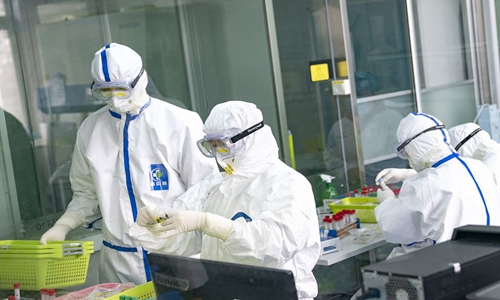 In his article "Covid-19 Is Traveling Along the New Silk Road," author Parag Khanna draws a sensational parallel between the spread of COVID-19 and that of the Black Death in the 1300s, and accuses China of spreading the virus along the Belt and Road route. He concludes that countries participating in the Belt and Road Initiative (BRI), and China's neighboring countries should seek for other geopolitical and diplomatic choices.

No conclusion has been reached about the origin of the virus, as work on tracing the source of the virus is still underway. Some countries, including the US, have reported confirmed cases without any clear link to Wuhan or China.

The New York Times reported that a married couple, who had no history of direct contact with Chinese people tested positive for the coronavirus in Japan this week after returning from a 10-day vacation in Hawaii. Those who call COVID-19 a "China virus," and suggest it originate in China without supporting facts or evidence clearly want to shift blame on China. Such accusations lay their ulterior motives bare.

Claiming that the path of virus' spread follows the Silk Road makes no sense. Coincidence does not equal to evidence. The US is not a BRI participant, yet the virus is spreading rather quickly on its territory.

A virus respects no borders. In 2009, the H1N1 flu broke out in the US, and its inadequate prevention and control measures caused it to spread to 214 countries and regions, killing at least 18,449 people that year alone.

Peter Frankopan, a professor of global history at Oxford University and the author of The Silk Roads: A New History of the World wrote: "The more we travel, the more we trade, the more we interact, the more liable we are to vulnerabilities." In other words, COVID-19, like many of previous epidemics, to some extent is an inevitable ramification of the progress of human society, and a challenge facing all humans. WHO Director-General Dr. Tedros said that the organization's focus of concern is shifting to countries outside China, where the virus is now spreading much faster. More than 30,000 cases have been reported outside China, in more than 100 countries.

This may not be a good time to try to talk China's BRI partners and neighboring countries out of cooperating with China. To fight for an early victory over the virus, nations around the world have chosen to work together despite their geographical distances, vividly exhibiting a community with a shared future for mankind.

As the situation keeps deteriorating in nations such as Iran and Italy, China is ready to provide as much assistance as its capacity allows in terms of prevention and control and medical treatment. Several days ago, China donated urgently needed testing kits and medical equipment to Iran. On February 29, a team of five experts from the Red Cross Society of China arrived in Tehran and has been working diligently, conducting exchanges and discussions with the Iranian health department and the Red Crescent Society on epidemic control experience. China is also prepared to enhance communication with Italy in professional fields and exchange experiences and technology in epidemic prevention and control.

Both Japan and the ROK provided valuable support and assistance to China at the onset of the outbreak. To quote a line from The Book of Songs, "You throw a peach to me, I give you a white jade for friendship." China completely relates to what Japan and the South Korea are going through. While continuing to combat the virus at home, China is ready to share information and experiences with those two neighbors and the larger international community, in an effort to strengthen cooperation and meet the challenges and difficulties together.

China's advantages - efficiency and speed - during this fight have been widely acclaimed. Bruce Aylward, the leader of the WHO team that visited China, suggested that China's way of fighting the outbreak offers a valuable lesson for other governments facing a similar situation. "What China has demonstrated is, you have to do this. If you do it, you can save lives and prevent thousands of cases of what is a very difficult disease." Iran has already translated diagnosis and treatment plans from Chinese into Persian, and is now working on implementing many of China's effective measures in its epidemic prevention and control. At the same time, the South Korea is opening special treatment centers, replicating China's Fangcang makeshift hospital built in just days in Wuhan.

As the fight against the virus is at a crucial stage, stigmatizing and finger pointing over the virus' origin is not helpful. WHO Director-General Dr. Tedros said; "Our greatest enemy right now is not the coronavirus itself. It's fear, rumors and stigma. And our greatest assets are facts, reason and solidarity." We should all say no to the "information virus" and "political virus." The outbreak has indeed posed a challenge to China's economy and foreign exchange, yet the impact is temporary. According to a report published by the Wall Street Journal, American company Apple is unlikely to transfer the production line of its high-end cellphone model out of China to countries like, India.

The world remains confident in the prospect for China's economy, because the fundamentals of China's economy will remain sound for a long term. China has become increasingly embedded in the global industrial chain, making it increasingly difficult, if not impossible to replace.

Currently, China's top priority is winning the battle against COVID-19. After arduous work, the positive trend in the prevention and control work is now expanding. We must remain vigilant and continue making unremitting efforts. We are happy to hear more good news as China and the world fight the epidemic together, but improper, stigmatizing language that tries to lay blame can only be considered intentionally unhelpful. As Frankopan notes, "The good news is that our interconnectivity means we can also share information quickly and effectively, and hopefully that means global solutions are quicker to deliver if everyone's minds are focused on solving the same problem." Let us stay focused.

The author is an observer of current affairs. opinion@globaltimes.com.cn