CPEC and the future of China–Pakistan ties

China–Pakistan bilateral interactions have reached an unprecedented peak with the China–Pakistan Economic Corridor (CPEC). But China’s rapidly expanding leverage across all spheres of Pakistan’s state and society has raised questions of whether Pakistan is still the ‘master in their own house’. The increasing number of occasions where Islamabad and Beijing are obviously not on the same page justifies asking whether China is master or friend of Pakistan despite the shared official rhetoric of an ‘all-weather friendship between iron brothers’. 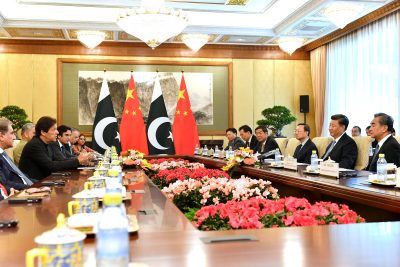 The implementation of CPEC and the increasing Chinese presence in South Asia are matters of concern, and not only for regional decision-makers. CPEC is the most complex and advanced development scheme of China’s Belt and Road Initiative and has increasingly become an influencing factor in the power dynamics of South Asia and beyond.

CPEC consists of a program to promote economic performance, but also serves as a tool for Beijing to extend its strategic influence from the South China Sea to the Indian Ocean and the Arabian Sea. The development side of the CPEC initiative is divided into several phases. Most projects — also known as the ‘Early Harvest Projects’ of the first phase — came to an end in 2019. These focussed mainly on the build-up of road infrastructure and energy generation capacities.

The ongoing second phase and establishment of Special Economic Zones aim to industrialise and modernise Pakistan’s economy. The latter goal is the main feature of every economic corridor project but it is far too early to measure the economic viability and sustainability of CPEC. Still, several trajectories can be identified from the first phase that point at major obstacles in the second phase and potential challenges.

Meanwhile the massive build-up of Pakistani armed forces to defend CPEC projects and the potential establishment of a second Chinese overseas military base in Jiwani are clear indications of the growing security dimension linked to the multi-billion dollar corridor. CPEC has severe geopolitical and strategic implications for states, the existing security architecture and particularly the distribution of power in the extended region.

A significant side-effect of the China–Pakistan collaboration is a boost in surveillance capacities. Capabilities in electronic governance — internet regulation (such as the enactment of the critical ‘Citizens Protection (Against Online Harm) Rules, 2020’) and control over incoming and outbound internet traffic — are expanding. So are the establishment of ‘Safe Cities’ with sophisticated monitoring and smart alert systems like surveillance cameras and scanners. Latest developments, such as the establishment of a Xinhua Urdu service combined with a new Memorandum of Understanding between Xinhua and Pakistani domestic media outlets, may be worrying considering the deteriorating freedom of opinion and press in Pakistan.

These developments might be seen as Chinese intrusion into the Pakistani media sector. Similar developments can also be observed in other states and regions — especially in the United States and Europe. The launch of satellites and the build-up of land-based optic fibre cables within Pakistan gives Beijing tremendous opportunities to monitor and control the flow of information and to conduct large-scale influence operations. China’s influence can be used not only to promote its image in Pakistan but also to suppress growing criticism of CPEC and Beijing’s activities in the country.

The emergence of grassroots demand for renegotiating CPEC projects and growing domestic dissent regarding the proclaimed economic and social benefits of China–Pakistan cooperation all present a challenge to CPEC. Potential sources of failure include market distortions, financial risks, entrenchment of corruption and state capture, the destruction of valuable agricultural land, and adverse effects on public health and the traditional livelihoods of local communities.

Pakistan’s authorities already perceive voicing criticism to be an anti-national activity — those who do risk being labelled ‘enemies of Pakistan’. But most domestic and international observers seem to ignore that this offers China an additional avenue to extend its influence in the country. The authorities’ disdain for dissent also provides repressive China–Pakistan joint ventures a carte blanche to undermine the legitimate political rights and freedoms of the people for the sake of ‘national interests’.

This approach of whitewashing problems will end disastrously for both CPEC and China–Pakistan relations. It will provoke growing resistance from broader society as well as militant groups increasingly targeting Chinese interests in the country. Even though the number of terrorist attacks has dropped during recent years, high-profile assaults with severe economic consequences still continue. But the Chinese leadership will never accept a failure of CPEC, so there is a risk they may consider taking on a more decisive role in Pakistani domestic affairs. All of this will create a vicious circle casting shadows over the future course of the ties between Islamabad and Beijing.

Siegfried O Wolf is Director of Research at the South Asia Democratic Forum (SADF), Brussels, and Senior Researcher at the South Asia Institute, Heidelberg University. He is author The China-Pakistan Economic Corridor of the Belt and Road Initiative: Concept, Context and Assessment (Springer, 2019).