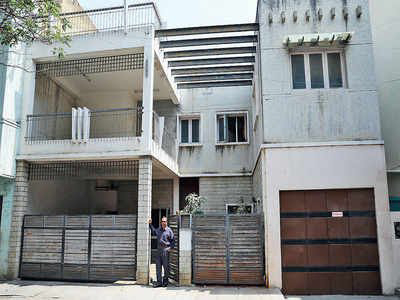 Jayanagar is known for its tree-lined avenues, wide roads, shopping centres and to some extent, its old-world charm. But long-time resident Gayatri Chandrashekar can tell you a lot more about the neighbourhood.

The former TV news anchor with Doordarshan Bangalore and a singer, Chandrashekar leads us to the antecedents of 16th A and 17th cross roads in Jayanagar’s 3rd Block. One that has a connection with Balochistan, a south-west province in Pakistan. In 1918, Ghouse Khan Tareen used to work with the Imperial Police Force and was transferred from Quetta in Balochistan to Chintamani in the Mysore state. He moved there with his family and later to Chamrajpet. Obeidulla Khan Tareen, his son, was supposed to replace his father in the police force after Ghouse Khan died. “Obeidulla was a young boy then. He joined the force but quit in two days. He wasn’t interested,” Chandrashekar learnt. He instead set up an optics shop in KR Market (called ES Optics).
Meanwhile, he bought a lot of agricultural land in Hosakote, Srirangapatna and the south of Bengaluru. A good portion of his original farm in Bengaluru constitutes the stretch from Patalamma temple to Madhavan Park till Rani Chennamma Sports stadium in Jayanagar’s 3rd Block today, she shares.

“Obeidulla gave away seven pieces of his land to his six daughters and one son (of the total 14 from his two wives). He also built a mosque that still stands at the end of 17th cross road. He sold more plots later, where now the row houses along 16th A and 17th cross roads have come up.” And so, locals call the area ‘Tareena Block’ or ‘Tareen Block’, informs Chandrashekar, going on to add that the family belongs to the nomadic Tareen tribe of southern Afghanistan and western Pakistan.

With the resolve of a journalist, Chandrashekar, who also stays in 3rd Block, went “knocking from one door to another” until she was led to Dr Zaferulla Khan Tareen, the only surviving son of Obeidulla, who is a GP, and runs a clinic in Khazi Street in neighbouring Basavanagudi, where his father’s original house stands quite close.

Just when Chandrashekar thought she had hit the jackpot, she realised these third and fourth generation descendants weren’t forthcoming. “Dr Zaferulla was more open. I interviewed him at the clinic, in between his appointments. He did promise to share a childhood photo of him with his father, but hasn’t done so yet” she says.
When this reporter reached out to the 68-year-old doctor for that photo, he said, “It was with my eldest brother, who passed away. I don’t know its whereabouts.” The family didn’t furnish evidence of land records. Habeebulla’s father had bought land from the Tareens post-1970s but even he doesn’t have the land papers. “It was so long ago,” he tells BM. Still, Chandrashekar isn’t skeptical of the claims because “there can be only one truth. The stories shared by the family members, Habeebulla and Sultana are consistent - that Tareens owned land, had cows and chickens in the area.”

According to Dr Zaferulla, his family members are more Bengalurean than Balochistani now, having grown up here. They speak Urdu, English and Kannada. Their food has evolved too. “My mother used to make biryanis with so many different masalas. We don’t make that anymore,” he says.

The surprising find is all the more meaningful in present times when we need to be reminded of our inclusive history. Chandrashekar will make a presentation at the ‘Unravelling Neighbourhood Stories’ event at Oak Room, The Park, MG Road, from 7.30 pm, on February 28.