How China Added Another 1.4 Billion Low-Cost, Offshore Workers to its Production Capacity

China’s Belt and Road Initiative (BRI) now covers 147 countries and territories, with projects and investment loans going out to nearly all of them. There is much debate and controversy about the BRI, not least with accusations that China is loading up smaller nations with debt (although why China would wish to do this is never explained) and is militaristic in design (although how China’s navy could effectively seize sea ports in Asia also remains unexplained). Consequently, my opinion is that China has instead come up with a scheme that allows it to secure much needed future supply chains via the three following criteria:

This will, and is, creating additional development opportunities, and especially as infrastructure build reaches conclusion in many countries affiliated to the BRI. Those with completed projects will start to see this infrastructure being utilized, facilitating the development of new trade routes and new market opportunities. These may be city to city, or city to port, or cross-border, or a combination of each; there are thousands of such projects underway on a global basis. These will soon start to kick in and new trade corridors will emerge.

While much of the actual BRI infrastructure overseas build has been conducted by using exported Chinese labor, there are interesting developments ahead for China’s SOEs that will start to use that infrastructure build and new trade corridors to service China’s increasingly affluent consumer class. As I pointed out in the article China’s Overseas Free Trade Zones and Industrial Parks, the country’s leading companies have actively been involved in setting up an increasingly expansionist network of manufacturing, processing, and assembly units that will manufacture both for the local markets they operate in but also for China, and markets China has access too. A map of these parks can be seen below. 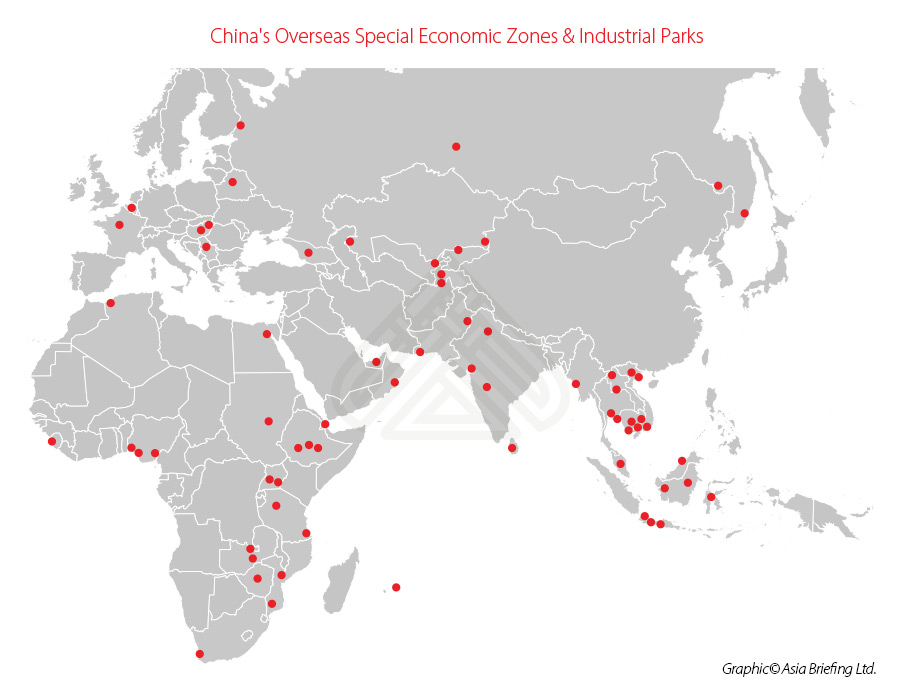 Many more such parks throughout Asia, Africa, Europe, the Middle East, and South America are in the pipeline. The number of overseas, Chinese-owned industrial parks can be expected to eventually reach into the thousands within the next decade.

Hand in hand with this are China’s free trade (FTAs) and double tax agreements (DTAs). Collectively, these also reach into the hundreds, and offer trade incentives and reductions in tariffs to all participating countries. A list of countries that have signed off on China’s Belt and Road Initiative and have a DTA with China is below. 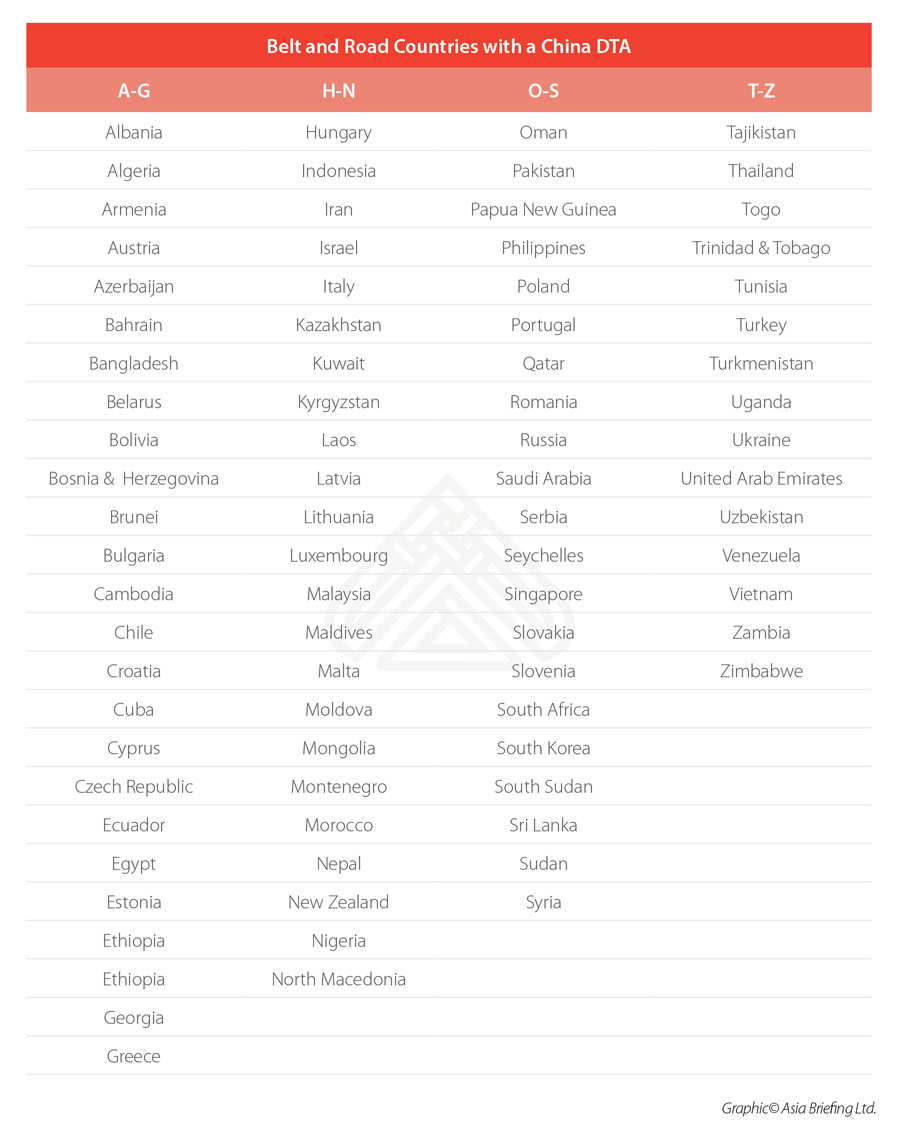 So, we have Chinese businesses investing in overseas industrial parks, the Chinese government investing political and trade time into negotiating free trade and double tax treaties. But there is a problem: where is the labor pool coming from?

A domestic problem for Beijing is that China is becoming increasingly expensive. This is especially true for Chinese labor costs, where minimum wage levels continue to grow. We explored this subject earlier in January this year, in the article China Minimum Wage Levels in 2020, which covers 98 different cities and regions in China and the minimum wage levels applicable in each. Although “minimum wage” in China is something of a misnomer, because employers have to contribute additional, mandatory expenses that typically add another 50 percent overhead on top, the minimum wage level does give an important benchmark on national differences. It also gives a China mean average: in 2020, the average minimum salary level in China is RMB 1,518, or US$216 per month. However, China is also increasing its wage levels – in 2019, by 3.6 percent above the base inflation rate, one of the fastest rates of salary increases in the world.

That is important to understand, not least for the Chinese government and its state-owned enterprises (SOEs). If those rates continue – which they need to, to enable the Chinese Communist Party to avoid mass discontent – China is going to need an alternative supply of cheap labor to meet its demands and maintain its competitiveness in global export markets. Where is that labor pool going to come from? The Belt and Road Initiative.

In the article Minimum Wages, Available Workforce, and Individual Income Tax Rates for Countries Part of China’s Belt and Road Initiative, I have outlined the minimum wage levels in each of the 147 countries and territories that have signed up to the BRI. It turns out that these collectively provide a workforce of 1.4 billion (equivalent to China’s total population) and possess an average minimum wage of US$273 a month. That is higher than the China national average – but crucially also includes some fairly wealthy nations’ minimum salary levels, such as New Zealand, South Africa, South Korea, and several European countries that influence the outcome. Broadly speaking, if we strip those out of the equation, it means that the Belt and Road emerging economies can provide a workforce of the same population as China and with an equivalent minimum salary base.

My view is, however, that China’s minimum wage level gap will start to pull away from the BRI nations over the next five years, providing China with a huge, available additional, yet lower cost offshore workforce that can be put to work in Chinese owned industrial parks around the world, by Chinese SOEs and their various overseas joint venture partners. China will, thus, be able to exert control over much of the global supply chain and manufacture, according to the Chinese state needs.

This strategy, of offshoring production requirements to developing economies overseas, puts China on a direct collision course with the US. The difference is that the US “Blue Dot Network” is puny compared to China’s gambit. It also means that an as yet unrecognized aspect to THE BRI is the bringing into China’s orbit OF 1.4 billion additional workers. Local governments will be pleased with the employment opportunities and taxable revenues these will bring. For the Belt and Road Initiative naysayers – how many low-cost offshore workers does the EU and US have at their disposal?

China’s Belt and Road is about to push Chinese domestic salaries far higher. That is great news for foreign companies wanting to sell to the Chinese domestic consumer. Elsewhere, opportunities await as Chinese SOEs look to their industrial parks, the low-cost, globally available workforce and continue to manufacture low-cost products for Chinese and global market consumption. The Belt and Road is far from dead. It has a collective labor force of 1.4 billion, low-cost available workers, and China intends to put that to use.

China Briefing is written by professionals from Dezan Shira & Associates. The firm has a near 30-year history in China, and possesses 12 mainland offices employing several hundred staff, assisting foreign investors into the country. We also provide strategic advisory and intelligence along the Belt and Road Initiative. Interested parties may email us at silkroad@dezshira.com or visit us at www.dezshira.com.