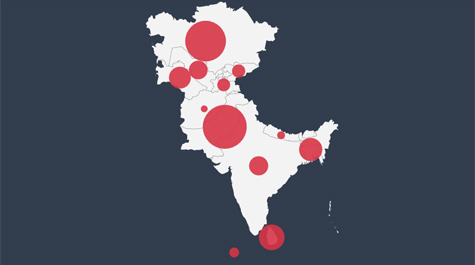 Chinese official finance:  For the period 2000-2017, AidData uncovered $126 billion in committed, implemented or completed projects in the SCA region by official Chinese agencies and banks. Of this, some $120 billion is in infrastructure investments. Eighty-five percent of infrastructure investments go to new construction projects, and two countries in particular captured half of Beijing’s financial diplomacy investments: Pakistan — an early signatory to the Belt and Road Initiative — and Kazakhstan.  Courtesy of AidData

Based on primary data collection (through AidData’s “TUFF” methodology) and secondary data synthesis, the quantitative research includes new numbers on China’s total investment in financial diplomacy in the region for the period 2000-2017, including all infrastructure investments, humanitarian aid, budget support and debt relief.

For the period 2000-2017, AidData uncovered $126 billion in committed, implemented or completed projects in the SCA region by official Chinese agencies and banks. Of this, some $120 billion is in infrastructure investments.

“Beijing has ramped up the volume and sophistication of its public diplomacy overtures in the region over time,” said Samantha Custer, AidData’s director of policy analysis, who led the research team. “But infrastructure as a part of its financial diplomacy dwarfs Beijing’s other public diplomacy tools in terms of sheer scale and visibility.”

Eighty-five percent of infrastructure investments go to new construction projects, and two countries in particular captured half of Beijing’s financial diplomacy investments: Pakistan — an early signatory to the Belt and Road Initiative — and Kazakhstan. In fact Pakistan received almost six times as much of China’s financial largesse over the period as did rival India.

Is China getting a return on its investment to promote a more positive image of itself? Complementing the quantitative data collection, the researchers also interviewed 216 individuals in 145 organizations in six SCA countries, in order to understand how Beijing’s public diplomacy efforts are perceived.

“At the end of the day, citizens appear to be somewhat polarized regarding Beijing’s financial diplomacy overtures in their countries,” said Siddhartha Ghose, AidData associate director and a co-author of the report. “These activities are associated with both lower approval and disapproval of Chinese government leadership. Some of these mixed feelings regarding Beijing’s role as an economic partner may stem from the fact that the Chinese government often ties its offers of financing to the use of Chinese firms, labor and supplies, with limited trickle-down to the local economy.

"As a case in point, we found that Beijing tended to allocate a greater share of its financial diplomacy between 2000 and 2017 to countries with a higher number of new Chinese firms and Chinese migrants. Moreover, in several cases, there were concerns regarding the utility and equity of Chinese government-backed infrastructure projects.”

The report notes that economically, Chinese leaders have several goals for the SCA region: productive use of surplus foreign currency reserves, preferential bilateral trade and investment deals, efficient transportation routes for Chinese exports and access to new sources of energy and raw materials.

“Interviewees across the six country studies highlighted a range of motives for Beijing’s engagement in their countries,” said Tanya Sethi, a co-author of the report and a Senior Policy Analyst at AidData. “These include marshalling support for the One China principle, ensuring safe passage for Chinese exports and imports, shoring up stability in its Western regions, such as Tibet and Xinjiang, contesting the hegemony of strategic competitors like India and Russia and minimizing censure for its domestic policies. In addition to swaying popular perceptions, Beijing is keen to influence the behavior of leaders to align with its preferred policy positions.”

In addition to financial diplomacy, the research team produced data and analysis on four other types of public diplomacy: informational/media, cultural, exchange and elite-to-elite. The team found that it is a crowded space for influence: citizens in SCA countries often feel greater cultural, linguistic and historic affinity with India in South Asia, or Russia in Central Asia. Other findings included:

Beijing has expanded the reach of its media partnerships throughout the region, but are most attuned to two countries: India and KazakhstanChina is most comfortable and prolific in cultivating relationships with political elites. Inroads with ordinary citizens have been superficial at bestBeijing places a disproportionate emphasis on wooing two countries — Kazakhstan and Kyrgyzstan — with its exchange diplomacy in the form of sister cities and student scholarships

“Many interviewees welcomed China’s investments in their economies, but cautionary tales of debt distress, allegations of corrupt practices and the overall opacity of backroom deals have stoked public debate and, in some cases, contributed to regime change," said Custer. "Meanwhile, a recurring theme was that Beijing’s overtures towards foreign publics is complicated by perceived cultural and linguistic distance from China for many SCA publics."

The researchers define public diplomacy as a collection of instruments used to influence the perceptions, preferences, and actions of citizens and leaders in another country, a means to win over foreign publics and advance its national interests. The new findings are contained in AidData’s report "Silk Road Diplomacy: Deconstructing Beijing’s toolkit to influence South and Central Asia," released today at an event in New Delhi.

The AidData research was conducted in partnership with the Asia Society Policy Institute and the Center for Strategic and International Studies, and with the support of the U.S. Department of State. The report and its findings will be presented in New Delhi at a special event on Dec. 10 held with the Observer Research Foundation.

AidData is a 30-person research lab at William & Mary that equips policymakers and practitioners with better data and evidence to improve how their sustainable development investments are targeted, monitored and evaluated. AidData uses rigorous methods, cutting-edge tools, and granular data to answer the question: Who is doing what, where, for whom, and to what effect? Its current and recent partners include USAID, the World Bank, the Hewlett Foundation, the Gates Foundation, the Cloudera Foundation, the Global Environmental Facility and Germany’s Federal Ministry for Economic Cooperation and Development.

AidData manages the most comprehensive and detailed source of project-level information on China’s global development footprint ever assembled. China itself does not publish a project-level, country-by-country breakdown of its foreign aid program. Using an innovative open-source methodology, Tracking Underreported Financial Flows (TUFF), AidData does both. TUFF is a rigorous, replicable methodology that triangulates open-source information to systematically create project-level data detailing official finance originating from opaque donors and lenders.