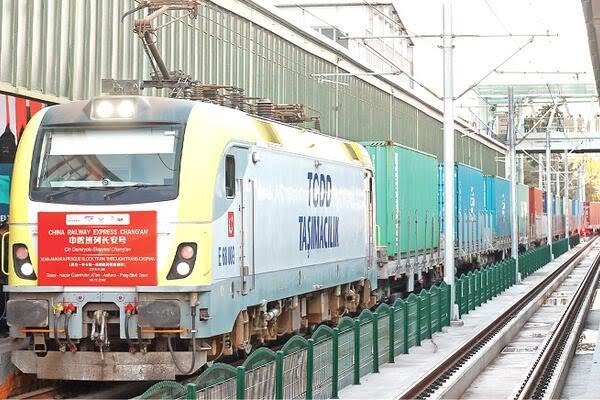 The first freight train traveling from China to Europe which passed from the Turkish borders last week is a first step towards a big game changer, according to a scholar. If the Chinese Belt and Road Initiative (BIR) were to be realized, it might have a trade generating effect, said Altay Atlı of Koç University. Turkey sees the BIR as a diversification in terms of answering the needs of its developing economy, Atlı added.

The first freight train traveling from China to Europe via Turkey crossed from Asia to Europe via Istanbul last week, making news headlines. Tell us why is this significant.

It is important. It is not a game changer at the moment, but it probably is the first step of something much bigger.

BRI is about connectivity between Asia and Europe, connecting China through Central Asia, the Middle East, Turkey and Russia to West of Europe. It is about improving logistical infrastructure and therefore about improving trade.

Chinese goods are using the maritime routes to arrive to Europe. But that takes a lot of time. This is a shorter route. But it is not cheaper because in a train you can load with 40 to 50 containers in a ship costs thousands. If you load the containers in Shanghai to send to

Rotterdam, you do the customs procedures in Shanghai and Rotterdam. With the railroad, you have to cross a lot of national borders with their national custom systems, and in addition, this is not the safest part of the world.

There have been trial rides through Russia. This was the first time this train went  through Turkey. This is symbolically important.

The maritime routes will not be replaced, but it is an alternative. It is important to be connected as BIR is about improving the infrastructure.

Why do you think China is giving so much importance to it if it is not such a big game changer?

BIR will be a game changer in terms of the large picture. BIR looks like a grand strategy aimed at improving Chinese influence around the world. China is bringing investments where there is significant lack of investment in infrastructure.

But I think BIR is much more about Chinese domestic economy. Chinese economy is going through a transformation. The old China is gone; the new one is yet to be born. They don’t have the competitive advantage of low costs, for instance. They have to create a new source of competitive advantage, and that’s why they are investing heavily in technology. They need to produce something that the rest of the world does not have. On the demand side, the world is saturated with Chinese products. China needs to find new markets; hence, BIR. When you invest like this, you use your money more efficiently.

What will be the consequences of the BIR be in terms of Turkish economy?

Turkey is not just interested in the dollar amount of the investments from China. Turkey seeks ways of benefitting from the new China that is investing heavily in technology, especially when our Western allies are hesitant to share technology with us. For instance, people are asking, ‘Aren’t you concerned about Huawei in your country?’ Probably not, when you think that Huawei has invested in joint technology centers in Turkey with the government but also institutions like Istanbul Technical University where Turkish engineers are working with Chinese.

But at the moment, BIR for Turkey is about expectations. What we have on the ground is simply a container port near Istanbul. It is the largest Chinese investment.

Both sides are willing to do more and sign documents. But they remain on paper. There is talk about, for instance, the Kars-Edirne high speed train being constructed by the Chinese.

Why do you think this has been so?

The Chinese want a greater economic presence in Turkey, but they have been hesitant for some time. There has been a lot of cases where the two sides have not been able to reach an agreement on the technical issues. The Chinese have been also in a wait-and-see mode because of the recent troubles Turkey has been going through for the last couple of years. There is also the Uighur issue, too. But the Chinese companies have their representatives in Turkey as they want to follow the country. This is a good sign.

The Chinese model of investment in Asia and Africa is criticized as being a debt trap. Could that also be the problem?

Turkey is not Africa. Turkey has more leverage against China. It is a larger market. Turkey has a very important position in which China needs to improve the logistics network in this part of the world. One of the largest Chinese investments in this part of the world is the Port of Piraeus. It is their gateway to Europe. According to the media, Chinese demand for expansion has been refused by the local authorities because it reached the limits of the city; they cannot demolish Athens. For China, there cannot be a single-entry point into anywhere in the world. This is why Turkey is important.

One of the reasons why it is taking long is that the two sides cannot find common ground on certain points.

Can Turkey fall on their trap? Is there a risk of facing hail while running from the rain, as the Turkish saying goes?

No, Turkey wants diversification. But I don’t think we are running away from rain, to use the metaphor. We just want to have different sets of umbrellas for hail and for rain. The bulk of the Turkish economy relies on the West. Seventy percent of foreign direct investment to Turkey is from the West. This is not going to change. China’s share is 1 percent. How far can it go? Turkey’s economic relations with the West is part of Turkey’s leverage against China. We have a stronger hand.

What would BIR mean in terms of the trade wars? Would the U.S. president be alarmed to see the train reaching Europe?

Let me talk about another development which is more alarming. A new terminal in the port of Haifa where the U.S. fleet frequently visits is being built by China because Israelis could not get financing from the U.S. Israelis approached the U.S. first, but they were turned down. The Chinese brought the financing. You have similar stories in Eastern Europe. Everyone is waiting for the high-speed train between Belgrade and Budapest to be finished by the Chinese.

Trade wars are the materialization of the currently increasing isolationism and protectionism in the world. If BIR will have a trade-generating effect by increasing connectivity, this can be good for global trade.

The Chinese investments are triggering reaction from the West, like Europeans coming with their own projects such as the Europe-Asia connectivity project. Chinese-American-European competition will be good for especially our part of the world.