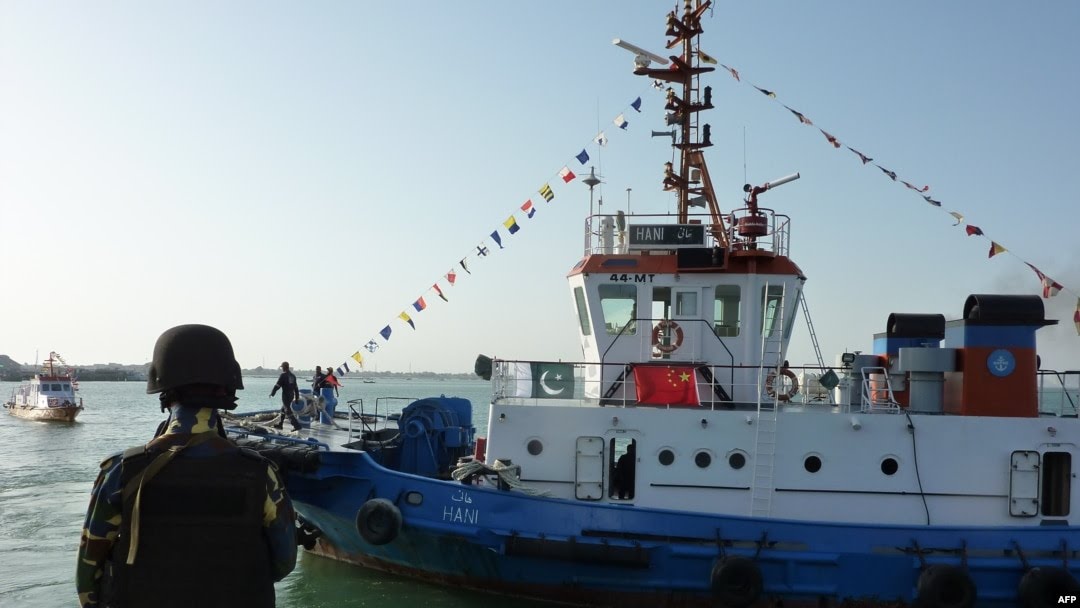 FILE: Pakistani soldiers stand guard at the port of Gwadar in the southwestern province of Balochistan.

Pakistan has emerged as the new front for the global rivalry between the United States and China as the two powers jostle to shape the 21st century.

Chinese officials have angrily reacted to the criticism of their multibillion-dollar infrastructure and energy investments, collectively called the China-Pakistan Economic Corridor (CPEC), by a senior U.S. diplomat last week.

“They are a mere repetition of old slanders against China,” Chinese Foreign Ministry spokesman Geng Shuang told journalists on November 25.

“Together with non-CPEC Chinese debts payments, China is going to take a growing toll on the Pakistan economy,” she told a think tank audience in Washington on November 21. “Especially when the bulk of payment starts to come due in the next four to six years.”

Andrew Small, a China expert at the German Marshall Fund, a Washington think tank, says recrimination between Chinese and U.S. officials must be viewed in the context of intensifying global Sino-U.S. rivalry and an American pushback against the BRI.

“Given that CPEC is the ‘flagship’ of the BRI, it was inevitably going to be a focal point at some stage — and its status means that Beijing is also extra-sensitive about any criticism,” Small told RFE/RL’s Gandhara website.

He says the detailed criticism of CPEC that Wells offered is part of Washington’s “increasingly critical view of the BRI financing and development model as it has played out on the ground in Pakistan and elsewhere.”

"It's clear, or it needs to be clear, that CPEC is not about aid," she said. "CPEC relies primarily on Chinese workers and supplies, even amid rising unemployment in Pakistan," Wells added as she made a case for an alternative U.S. model to help with improving the fundamentals of Pakistan’s troubled economy.

But Yao Jing, the Chinese ambassador in Islamabad, said Wells lacked "accurate" knowledge and instead relied on Western media "propaganda" in criticizing CPEC.

"I would like to remind my American colleague that if you are really making this kind of allegation, please be careful, show your evidence, give me evidence; we will take action," he told journalists on November 22. "China will never, ever ask for these loan repayments as long as you are in need of this money. If Pakistan needs it, we keep it here."

Marvin Weinbaum, director of Afghanistan and Pakistan studies at Washington’s Middle East Institute think tank, agrees that the recent U.S. criticism of China’s involvement in Pakistan folds into its rivalry with Beijing.

“While many of Well's criticisms of CPEC carry validity, these criticisms are viewed in Pakistan's policy circles as reflecting U.S. frustration about being left behind as China extends its economic and political influence,” he told Gandhara.

Weinbaum says that during his recent trip to Islamabad this month he detected a more realistic understanding of the Chinese investment but CPEC continues to be viewed as benefiting Pakistan overwhelmingly. “Notwithstanding, Islamabad still values its relationship with Washington and does not feel it has to choose between the two powers,” he noted.

Small agrees but cautions against viewing the U.S. and Chinese disagreements over CPEC as an all-out war for influence in Pakistan.

“There is certainly a battle over the reputation of CPEC, but that’s a component of the broader Sino-U.S. rivalry rather than something Pakistan-specific,” he said. “The U.S. and China have historically been able to co-exist quite well in Pakistan; China wants the U.S. to help bolster the country militarily and economically given that its most important strategic role for Beijing has been as a counterbalance to India.”

But the current state and future of CPEC hardly heralds an era of stability and prosperity. According to a yet-unpublished report of Small’s on the corridor, CPEC has stalled. His research indicates that the figures still commonly cited for the total CPEC package -- $62 billion or $46 billion -- are no longer accurate.

“The projects that are already underway or completed are far from negligible,” his forthcoming report notes. “With approximately $19 billion in investments — though some generous estimates run as high as $30 billion — it represents a marked expansion of China’s economic presence in Pakistan.”

Apart from economic and financial considerations, political and strategic factors are expected to figure prominently in deciding CPEC’s future. They are likely to test and define Islamabad’s ties with Washington and Beijing and the rivalry between the two.

According to a recent report in the prominent business weekly Nikkei Asian Review, Islamabad is now looking at a CPEC Plus model by attracting neighboring Iran and close ally Saudi Arabia to join the project.

Pakistan recently replaced its minister of planning, a portfolio in charge of CPEC projects, with someone more acceptable to China. Beijing is also reportedly demanding Islamabad replace its ministers for communication and railways so that important CPEC projects can be implemented smoothly.