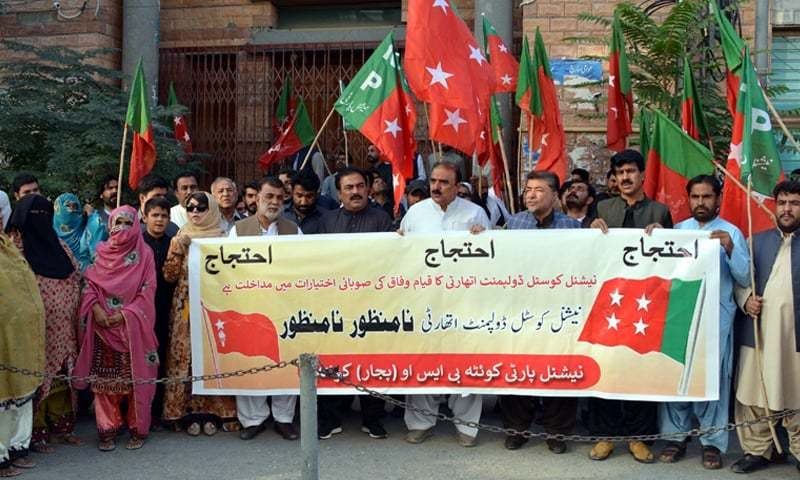 GWADAR: The National Party on Sunday organised a demonstration against the federal government’s decision of establishing a new institution ‘National Coastal Development Authority’ (NCDA) for Gwadar, a delay in fulfilling demands of local fishermen in Gwadar Expressway’s projects and fishing by illegal trawlers in the sea.

A large number of NP’s workers and supporters took part in the protest demonstration.

Addressing the protesters, NP leaders Khair Bakhsh, Naseer Ahmed Shahwani, Rab Nawaz Shah, Faiz Nagori and others expressed their reservations over the federal government’s plan to establish the NCDA and termed it interference in provincial affairs.

They said taking such a decision was an attack on 18th Amendment in the Constitution.

They termed the decision a federal government’s plan to usurp coasts of Balochistan and Sindh.

They said the decision to establish a new institution in the presence of Balochistan Coastal Development Authority (BCDA) was unjustified.

If the federal government wanted to develop coastal areas of Balochistan, it should give this task to BCDA which was established for the same purpose.

The said establishing the NCDA would be interference in the affairs of Balochistan.

They regretted that a nationalist party of Balochistan, which claimed to be a champion of the rights of the province, was a coalition partner of the Pakistan Tehreek-i-Insaf-led federal government, but it was not raising its voice against this “conspiracy against Balochistan”.

“No opposition existed in Balochistan as all parties have become part of the government and people are being hoodwinked,” they said.

They alleged that both the federal and provincial governments were not interested in protecting the livelihood of local fishermen, adding that the delay in implementation of the demands of local fishermen in Gwadar Expressway’s projects were increasing their problems.

They said 80 per cent people in coastal areas of Balochistan were associated with the profession of fishing and if the government would not accept the demands of local fishermen a large number of people in these areas would lose their jobs.

They said the government was making tall claims of launching development projects in the province under the China-Pakistan Economic Corridor, but it was not interested in solving problems of local people.

The NP leaders regretted that the use of drugs was increasing in Gwadar, but the government not taking any action against people involved in this heinous crime.

“The NP would not accept any injustice with the people of Gwadar and would never allow formation of NCDA at any condition,” they said.