Two Asian powers and an island 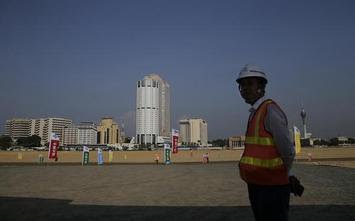 Unlike China, India has not accomplished much in Sri Lanka in the Sirisena years.

The imposing Lotus Tower in Colombo, which was opened to the public recently, is considered to be the latest symbol of Sri Lanka-China ties. An agreement to build this structure, which is to serve as a multi-functional telecommunication tower, was signed by the two countries in 2012.

It may look ironical that much of the project’s execution took place under a regime which came into office at a time when there was a “strong anti-China mood”. In the run-up to the 2015 presidential election, Ranil Wickremesinghe, who was backing Maithripala Sirisena, had assured people that another Chinese project, the $1.4 billion Colombo Port City, would be scrapped. Soon after Mr. Sirisena became the President, work on the Port City came to a grinding halt. Then, there was also uncertainty over the fate of the Hambantota port, the development of which was originally offered to India by Mahinda Rajapaksa on becoming Sri Lankan President in November 2005. (India was said to have examined Hambantota purely from the point of view of economics, overlooking the strategic angle.)

However, all of this is now history, as Colombo-Beijing ties have stood the test of time. China has been able to resolve all the controversies over these projects. The Port City’s execution is underway without any major hitch. When it becomes a reality, it will stand beside the Colombo port, which serves as a major transshipment hub for India. A Chinese company has got Hambantota on lease for 99 years along with associated land of 15,000 acres. More importantly, Sri Lanka is a member-country of the Belt and Road Initiative.

Notwithstanding an argument by some international experts that economic ties with China are driving Sri Lanka into a “debt trap”, the bilateral relationship on the economic front is only becoming stronger. According to the 2018 annual report of the Central Bank of Sri Lanka, imports from China accounted for 18.5%, just a little less than the 19% from India.

On the other hand, India cannot claim to have accomplished much in the Sirisena years, despite its “neighbourhood first” policy since May 2014. Apart from clinching a joint venture deal in May with Japan and Sri Lanka to develop the East Container Terminal at the Colombo Port, India cannot boast of having taken up any major infrastructure project in Sri Lanka. Not much is known about the status of a project to renovate the Kankesanthurai harbour in the Northern Province, for which India provided over $45 million in early 2018. There seems to be little progress in India’s proposals to develop the Palaly airport in the North, (where commercial flight services in a limited way are expected to be launched shortly) and acquire a controlling stake in the Mattala Rajapaksa International Airport. And for all practical purposes, the Economic and Technical Cooperation Agreement, an improved version of the existing bilateral Free Trade Agreement, has been shelved.

In recent years, only a couple of social sector projects of the Indian government — building 60,000 homes for Tamils of the civil war-torn Northern and Eastern Provinces as well as those in the hill country region, and the provision of ambulance services all over the island — gathered momentum. Both these are being carried out using grants of the Indian government. In July, an agreement was signed to upgrade a key railway segment, connecting the north and the south, at $91 million.

However, given its potential and willingness to do more in development cooperation, India cannot remain satisfied with such a modest track record. When Mr. Wickremesinghe visited New Delhi about a year ago, Prime Minister Narendra Modi expressed concern over delays in projects proposed by India. The joint development of an oil storage facility in Trincomalee is one such project which has been discussed for years. What can be a matter of consolation for New Delhi is that Colombo, about a year ago, reversed a decision to award a $300-million housing project, meant for the North, to Beijing.

China-funded infrastructure projects in Sri Lanka may look great, but India-Sri Lanka ties are deeper and more complex. As Mr. Modi said, “In good times and bad, India has been and will always be the first responder for Sri Lanka.” India’s assistance during the 2004 tsunami and Mr. Modi’s visit to Colombo in June (the first foreign dignitary to do so) in the aftermath of the Easter Sunday attacks show India’s sincerity of approach.

Despite these deep ties, it is true that India and Sri Lanka have seen some unpleasantness in bilateral relations in contemporary times. The anti-Tamil pogrom of 1983 dragged India into the Sri Lankan Tamil question. Events such as the withdrawal of the Indian Peace Keeping Force in March 1990 and the assassination of former Prime Minister Rajiv Gandhi in May 1991 made New Delhi adopt a “hands-off approach” towards Colombo till the final phase of the civil war. In the last five months of the war that ended in May 2009, India repeatedly conveyed to Sri Lanka that the rights and welfare of the civilian population should not get enmeshed in hostilities against the LTTE. But this was not considered sufficient by protagonists of the proscribed organisation and some others who have been accusing the Indian government of having played a role in the LTTE’s defeat.

However, with all their shortcomings, the Rajiv Gandhi-Jayawardene Accord of 1987 and the 13th Amendment to the Sri Lankan Constitution, envisaging devolution of powers for provinces, still provide a solid framework to address the ethnic question. Apart from a political settlement, the Northern and Eastern provinces, which account for less than 10% of Sri Lanka’s GDP, require economic development as there are signs of the youth there getting distracted from the pursuit of greener pastures. The Indian government is willing to walk the extra mile in this area, but what is wanting is a proper response from the Tamil political leadership.

When Sri Lanka gets a new President in two months, India must sit with that leader not just to get expeditious approvals for all the pending infrastructure projects but also contribute to a holistic development of Sri Lanka’s youth. Also, New Delhi should sustain its interest on developmental issues concerning the hill country Tamils, regarded as the most backward in Sri Lanka. It will also be worth making one more attempt to encourage the voluntary repatriation of nearly 95,000 refugees who live in Tamil Nadu back to Sri Lanka. As a step towards this direction, the authorities should resume ferry services between Talaimannar and Rameswaram at the earliest.

As once stated by the High Commissioner of India to Sri Lanka, Taranjit Singh Sandhu, “Our aid is not to raid or invade”. A benign and comprehensive approach, backed by the sincerity of purpose, will not only earn India greater respect of Sri Lankans, but also send a message to other international players about the strength of its ties with Sri Lanka.