Anti-Pakistan protests have been going in New York for a few days now, designed the coincide with the UNGA meetings. 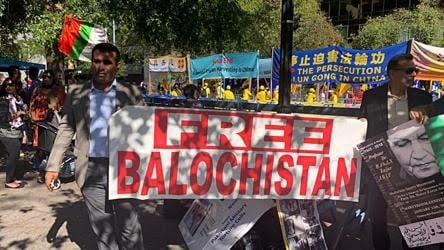 People hold a banner of 'Free Balochistan' during a protest, outside U.N. headquarters in New York. (ANI Photo)

A small plane flew around the iconic Statue of Liberty, trailing a banner that urged the UN to stop human rights abuses by Pakistan in Balochistan around the time Prime Minister Imran Khan was alleging abuse by India in Kashmir in his maiden address in the General Assembly.

“UN must help end human rights abuses in Balochistan,” read the message, in capital letters. It flew down the Hudson river along the city’s skyline and made 10 laps around the statue.

At the same time, thousands of Indian Americans stood outside the United Nations, some of them in colourful traditional dresses celebrating Prime Minister Narendra Modi’s third address to the UNGA that was noted for the lack of any reference in it to Pakistan, which stood out when Khan spoke later.

“Modi came out with a higher-profile, looked well-behaved and a gentleman,” said Bharat Barai, an Illinois medical practitioner who had helped organise the demonstration by Indian American, to show support to the prime minister but also offset the crowds Pakistani’s were expected to have amassed.

Pakistani’s supporters, who had also turned out in sizable numbers stood in solidarity with Khan on another street nearby.

Anti-Pakistan protests have been going in New York for a few days now, designed the coincide with the UNGA meetings. Two truck with massive billboards protesting alleged Pakistani atrocities in Balochistan and against Pakistan’s minorities such as Mohajirs stood silently outside a hotel that hosted the annual informal meeting of SAARC on Thursday.

The plane around the State of Liberty was sponsored by the World Baloch Organisation, which first deployed trucks — in London and then New York and Washington DC — with large billboards that cruise around blocks slowly and quietly spreading their message.

The organisation said, citing a commission of enquiry established by the Pakistani government, 5,000 cases of enforced disappearances for Baloch people have been registered since 2014. Most of them remain unresolved. “Independent local and international human rights organisations put the numbers much higher. 20,000 have reportedly been abducted only from Balochistan,” it said.

They had also put massive electronic billboards at Times Square, nestled among those advertising giant corporations and brands over the past few days — they read “Baloch Lives Also Matter” and “Justice for Baloch”.