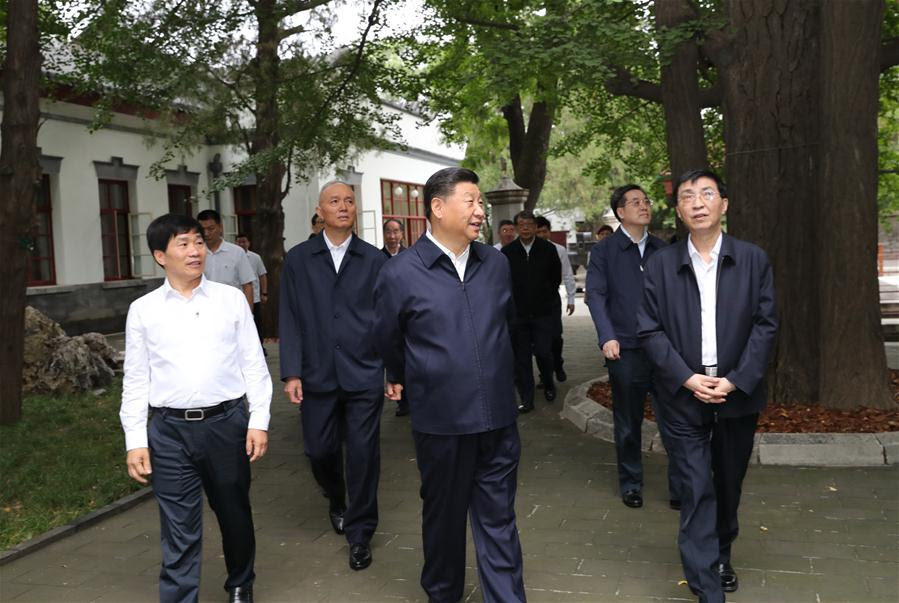 Official propaganda continued to focus on trade tensions with the US, putting the onus on the US to create the necessary conditions for successful negotiations (see Propaganda Work section).

Xi visited the newly-established Xiangshan Revolution Memorial Site in Beijing ahead of the 70th anniversary of the founding of the PRC.

Xi Jinping met with Ho afterwards in the Great Hall of the People in Beijing. He congratulated Ho and praised him for “upholding the Love the Country Love Macau position” (秉持爱国爱奥立场), for “enthusiastically serving Macau society,” and for “making active contributions to the country’s reform and opening up and modernization and Macau’s prosperity and stability.” Xi said he hoped Ho would “accurately grasp the needs of Macau’s real situation and the national development strategy, unite and lead the Macau SAR’s new government and all walks of life in society, advance cooperation, innovate change, earnestly plot Macau’s long-term development, and continue writing a new chapter of the successful practice of ‘One Country Two Systems.’”

9.12  In preparation for the 70th anniversary of the founding of the PRC, Xi Jinping made a “special trip” to the newly-opened Beijing Xiangshan Revolution Memorial Site, the seat of the CCP Central Committee on the eve of the CCP’s victory in 1949. Since last year, Beijing has reportedly renovated eight former revolutionary sites. Politburo Standing Committee member Wang Huning (王沪宁) also made the trip.

He encouraged CCP members to adopt the revolutionary spirit of the CCP’s revolutionary generation. He concluded that the CCP’s history reveals that the CCP and Chinese people are “not only good at breaking down an old world, but also at building up a new world.” “Looking ahead,” he said, “China’s development prospects are boundless.”

9.10  People’s Daily published an article under the Zhong Sheng (钟声) byline, which authoritatively conveys the paper’s views on international issues, to comment on the US-China trade war and once again directly criticize White House trade advisor Peter Navarro, who on 8 September reiterated his accusations regarding China’s “seven deadly sins” and asserted that China is bearing the “full burden” of US-imposed tariffs. The article said Navarro’s “absurd words” were “completely unconstructive,” and that the US stock market’s reactions “to a certain extent illustrate the problem”: when the US and China “promoted bilateral communication and mutual goodwill, the US’ three large stock market indexes have risen accordingly; when trade frictions escalated or some people on the US side used untrue words to launch an offensive, the three big stock market indexes have fallen substantially.” For instance, it noted that on 5 August, the first weekday after Navarro debuted his “seven deadly sins,” the S&P500 and NASDAQ Composite both experienced their largest single-day drops of that month. It said “Navarro’s fallacies created trouble for resolving trade problems, represented a force to destroy US-China trade cooperation, and added momentum to the recessionary impact brought by trade tensions.”

The article urged “some Americans” to “respect economic rules,” “take classes in economic common sense”, and “listen to voices from all walks of life in American society.”

9.11  People’s Daily put out a commentator article about the “Remain True to the Original Aspiration, Keep the Mission Firmly in Mind” education campaign. It said that “combining learning and doing, [and] linking up supervision and improvement” were highly successful outcomes of the first phase of the campaign, and important means of achieving solid results in the second phase.

The article noted that the “Guiding Opinions On the Launch of the Second Phase of the ‘Remain True to the Original Aspiration, Keep the Mission Firmly in Mind’ Education Campaign” (关于开展第二批“不忘初心、牢记使命”主题教育的指导意见), published this month by the central leading group in charge of the campaign, said it was necessary to “promote an organic fusion of study, investigative research, examining problems and implementing reform,” and added that although this is fundamentally an educational campaign, the ultimate purpose of studying is application. The article also stressed that “having the courage to face problems and daring to correct mistakes is a remarkable characteristic and advantage of our party,” and that the Party must “carry forward the spirit of self-revolution.”

9.12  People’s Daily published a Zhong Sheng article to discuss the Chinese State Council Customs Tariff Commission’s 11 September announcement that 16 previously-tariffed US goods would be exempt from additional tariffs starting on 17 September, a policy the article called “a rational move in view of the greater picture” that embodies China’s ‘consistent rationality and restraint.”

It explained that this policy was based on the results of a trial launched on 13 May, which studied whether tariffs on particular US imports would “make it hard for companies to find replacement sources,” “have negative structural effects on relevant industries,” “impact the people’s quality of life,” etc.

The article also pushed back against “some people on the US side deliberately misrepresenting” China’s announcement by “calling it a sign that China is unable to bear the impact of trade frictions.” It suggested this attitude was not seeing the broader picture, or was perhaps false bravado. It insisted that China’s economy is tough and does not fear any outside challenge because “China is the only country in the world with a complete industry chain, and US tariffs cannot easily destroy this industry chain.”

9.9-10  Politburo Standing Committee member and CPPCC National Committee Chair Wang Yang (汪洋) conducted an inspection and research tour on religious work in Jiangxi Province. During the tour, he visited religious sites in Fuzhou and Nanchang and presided over a symposium on religious work. Wang called for “further strengthening the construction of grassroots party organizations, improving our sense of responsibility and ability to help the masses resolve practical difficulties, vigorously spread the guidelines and policies of the Party’s religious work, and guide the masses toward a rational view of religion and conscious resistance to all sorts of illegal religious activities.”

9.11  Wang Yang delivered a speech at a united front symposium celebrating the 70th anniversary of the founding of the People’s Republic of China. Approximately 160 united front representatives and heads of relevant departments at party and state organizations were in attendance.

Wang emphasized that “the united front is an extensive political alliance led by the CCP that has distinct Chinese characteristics. It was, is, and will continue to be an important magic weapon for achieving the party’s undertakings.” He asserted that “practice proves that the CCP’s theories, guidelines, and policies on the united front are completely correct and that the numerous united front members are allies that the CCP can completely rely on and trust.”

Wang stressed that “as socialism with Chinese characteristics enters a new era, the united front’s work in building consensus, rallying public support, and pooling wisdom and strength is even more arduous.” He called on the united front to “consciously serve the general situation of party and national work and closely focus minds and efforts on major problems in economic and social development, difficult problems in comprehensively deepening reform, and problems concerning the interests of the people.”

9.7  Wei Chuanzhong (魏传忠), the former deputy head of the (now defunct) General Administration of Quality Supervision, Inspection, and Quarantine, has been expelled from the Communist Party after the Central Commission for Discipline Inspection (CCDI) and National Supervisory Commission (NSC) found him to be in “serious violation of discipline and law.”

The investigation found that Wei had “lost his ideals and convictions, abandoned the Party’s original aspirations and mission, was politically disloyal and dishonest toward the Party, resisted organizational review, and did not report relevant personal matters in accordance with regulation.” Wei is also accused of “entering private clubs” against regulations, using public funds for personal spending, using his power to benefit business or professional interests of his relatives and others, illegally investing in unlisted companies and accepting “monetary gifts,” “moral degeneracy” including paying for sex, trading money for power, and illegally accepting large amounts of property.

9.9-11  Politburo Standing Committee member and CCDI Secretary Zhao Leji (赵乐际) conducted inspection and research tour in Hebei province. During his trip, he emphasized that “discipline inspection and supervision organs should consciously implement the Party’s original aspiration and mission,” “understand Xi Jinping Thought on Socialism with Chinese Characteristics for a New Era,” and “fulfill the duties entrusted by the Party Constitution and the PRC Constitution.”

9.9  In his capacity as head of the Central Commission for Comprehensively Deepening Reform (CCCDR/中央全面深化改革委员会), Xi Jinping presided over the tenth meeting of the commission. The body deliberated and approved eleven opinions on topics including promoting integration between the advanced manufacturing industry and modern service industry, building a better environment to support reform and development of private enterprises, promoting social mobility, reducing burdens on elementary and middle school teachers, supervising and managing financial infrastructure, strengthening science and technology innovation, and advancing environmental protection.

9.12  Song Tao and Wang Yajun met with Party of Socialists of the Republic of Moldova President and Parliamentary Group Leader Zinaida Greceanîi.

9.12  Song Tao participated in a governance concept exchange meeting commemorating the 20th anniversary of the establishment of relations between the CCP and New Azerbaijan Party.

The latest from CACR:Honey Over Vinegar: China's Slow and Steady Approach to Military Access in Cambodia