A new survey from professional services firm PwC has found that Singapore represents the second most attractive opportunity in Asia for Belt & Road investments – behind only Vietnam.

China’s Belt & Road initiative is undoubtedly big, set to completely reshape global trade, and as such the economic and geopolitical world order. But what does it mean for companies in Southeast Asia – a region which makes up one of the bold project’s primary arteries? PwC Singapore has sought to find out through a cross-sector survey of senior executives from across the Asia Pacific, 30 percent of which represent firms generating revenues in excess of $500 million.

Conducted in conjunction with the Singapore Business Federation for release at this week’s Singapore Business Regional Forum and Singapore Regional Infrastructure Summit, the survey found that while close to one third of the respondents were currently involved in a Belt & Road Initiative (BRI) project, one quarter remain unclear about the potential opportunities. A further 30 percent were still at the preliminary information gathering and analysis stage. 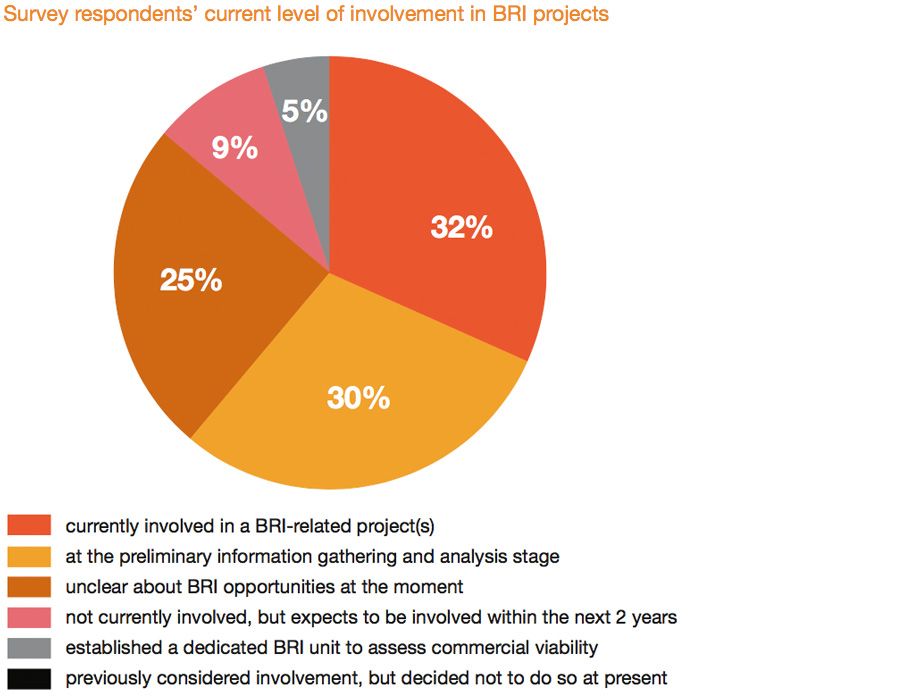 Although another ~15 percent expect to be involved within the next two years or had established a dedicated BRI unit to assess commercial viability, the authors of the report provide a clue as to the wide uncertainty. “While the Chinese government has explained on multiple occasions that BRI is a concept, framework and principle, rather than a defined list of projects, international investors are still hoping for more details around the definition of BRI projects.”

Broadly speaking, the firm says, BRI projects are projects that fall within certain economic corridors and trade routes, and their numbers will grow as more countries join the BRI. To date, the Chinese government has signed cooperation agreements with 126 countries and 29 international organisations in the six years since the project was initiated. PwC expects more organisations in the region to seize the opportunity and participate in the projects in the future. 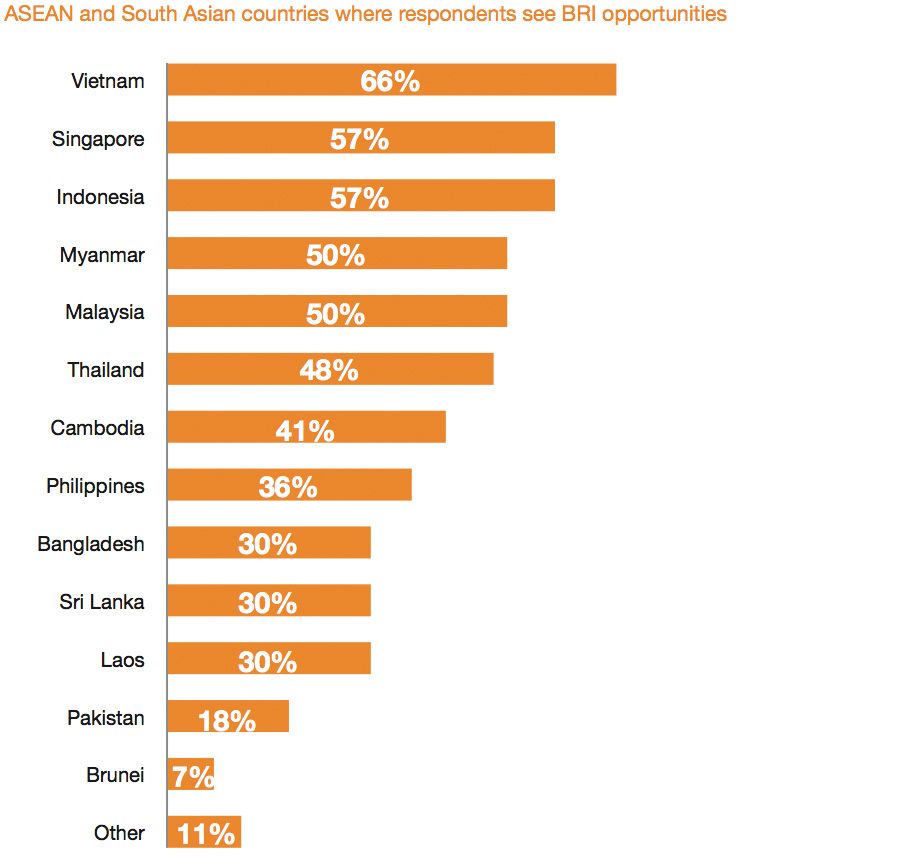 Here, while the level of interest for investment opportunities was spread throughout Southeast and South Asia, Singapore and Indonesia were seen as the equal second-most promising countries, each attracting 57 percent of the respondents to land behind only Vietnam (66%) – which has evolved into a major manufacturing hub as the Chinese economy begins to pivot. This result also mirrors an earlier PwC survey for general cross-border APAC investment intentions.

Myanmar, Malaysia and Thailand were also seen by around half of the respondents as attractive opportunities for investment, while areas cited for investment focused on a wide array of infrastructure development which will support trade and industrialisation, with smart cities/urban development topping the list (43 percent) ahead of industrial estates and Special Economic Zones (41 percent), and roads, ports and ICT/telecommunications at each 39 percent. 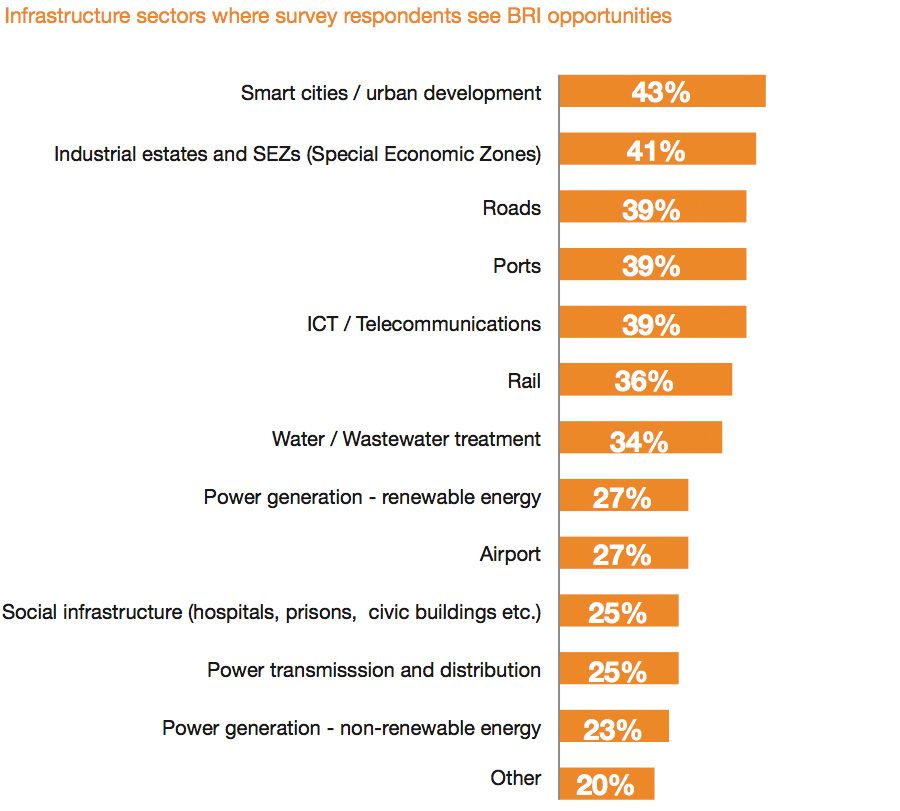 “Infrastructure development plans are typically done with the ecosystem in mind and will include considerations such as transportation, power, utilisation, banking, housing and education, to name a few,” notes Jennifer Tay, who was recently made a partner in PwC Singapore’s Capital Projects & Infrastructure practice. “It will also require the balancing of commercial, operational and demand risks among different infrastructure,” she adds.

More so than demand risk though, the respondents cited political risk as the number one concern, at a rate of three quarters, finishing ahead of financial risk at 68 percent. This result is not unexpected when considering the close relationship between infrastructure and geopolitics, says PwC, citing recent interruptions to infrastructure projects due to political shifts. This concern, however, could present a specific opportunity for businesses operating in Singapore.

“Singapore has been an early and strong supporter of the BRI, particularly in four key areas: infrastructure connectivity, financial connectivity, third party market collaboration and cross-border commercial dispute resolution,” concluded S.S. Teo, Singapore Business Federation Chairman. “Our companies can leverage the strength of the Singapore brand, widely recognised for trust, the rule of law and our financial system.”