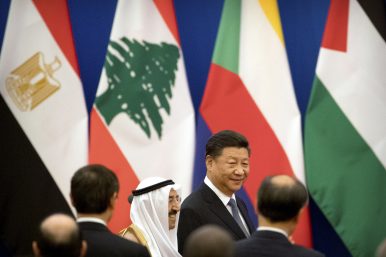 The China-Arab States Expo spotlights the growing economic relationship between China and the Middle East.

Chinese representatives are set to meet with Arab delegations for the fourth China-Arab States Expo in Yinchuan city, Ninghai Hui Autonomous Region from September 5 to 8. The gathering, intended to bolster economic and trade exchanges between Beijing and partners in the Middle East and North Africa, will focus on agricultural issues such as rural revitalization, desertification, and the further development of new technologies. China is simultaneously hosting an Online Silk Road conference in Ningxia on internet cooperation and internet related industries including cross-border e-commerce and investment and capacity building.

The expo is one of a handful of multilateral vehicles to deepen relationsbetween Beijing and governments in the Middle East and North Africa, and supplements the Arab-China Political Strategic Dialogue that most recently was held in June in Abu Dhabi. The more comprehensive China-Arab States Cooperation Forum (CASCF) was first established in 2004 to foster better exchanges between Beijing and members of the Arab League. Nearly a decade and a half later, the CASCF was upgraded to a “strategic partnership of comprehensive cooperation and common development” during a gathering of more than 300 representatives from Chinese and Arab delegations. Separately, negotiations for a regional free trade agreement between China and the six member countries of the Gulf Cooperation Council (Bahrain, Kuwait, Oman, Qatar, Saudi Arabia, and the United Arab Emirates) started more than 10 years ago and seem to have faded from public discussions, while the notion of a broader FTA among 21 Arab states has been raised.

The economic relationship has steadily solidified as China has sought to import increasing amounts of energy resources from the region’s oil and gas rich states. However, both sides have pushed to diversify relations through financial and banking cooperation, renewable energy, and high technology collaboration, sectors with increased demand in Arab countries and in which China is playing a major development role. China is one of the group’s leading investors and its second largest trading partner with trade volume between China and the Arab League hitting $244.3 billion in 2018, up from $36.7 billion in 2004.

Some Arab states may also be looking to China as a model for their own economic development: pursuing economic liberalization while maintaining tight political control and using various tools of domestic repression. Chinese President Xi Jinping’s extension of the Belt and Road Initiative and the promotion of greater connectivity has been particularly welcomed among Arab states.

While China, under Xi’s leadership, has been more active within multilateral forums amid uncertainty about the U.S. commitment to international leadership, its regional efforts are reinforced by grand state-to-state exchanges. Bilaterally, leaders in China and in Arab states have hosted a series of high-profile visits, full of billion dollar deal announcements including $28 billion in cooperation agreements with Saudi Arabia, projects to invest in and develop an airport area in the United Arab Emirates, and last year’s pledge from Xi of more than $20 billion in loans, humanitarian assistance, and development aid to Arab countries.

Economics and trade continue to be the focal point of Sino-Arab relations, but such ties cannot be completely bifurcated from the complex and dynamic political and security conditions in the region. In fact, there are some indications that China may seek to become more involved in security-related matters in the region. For example, last year Xi said “China would like to join the Arab countries … to become the keeper of peace and stabilityin the Middle East, the defender of equity and justice, promoter of joint development, and good friends that learn from each other.” However, in such a fraught security environment, it remains to be seen precisely how BRI investments translate into tangible vehicles of peace and stability. For the moment, beyond rhetorical messaging, China still seems a way off from making the step from investor to security mediator or provider.