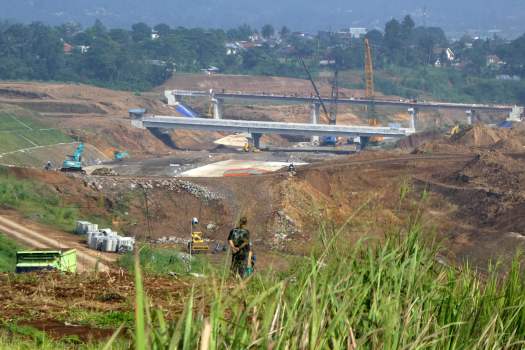 This photograph taken on November 2, 2017, shows the construction of a toll road from Jakarta to Lido, the planned location for a theme park linked to companies with business interests tied to US President Donald Trump, in West Java province. A billion-dollar Indonesian real estate development with ties to Donald Trump has become the latest project in China’s globe-spanning Belt and Road infrastructure project — just as Washington and Beijing are tussling over trade. A subsidiary of Chinese state-owned construction firm Metallurgical Corporation of China (MCC) signed a deal with Indonesia’s MNC Land to build a theme park outside Jakarta as part of the ambitious project, the company said in a statement on May 10, 2018.

Critics contend that China’s massive belt and road initiative (BRI), a grand geopolitical strategy, is designed to enhance its global presence and political and economic influence, but China claims that BRI is purely an investment and infrastructure development project aimed at improving regional cooperation and connectivity, a win-win for both China and its BRI partners. In fact, it is both.

President Xi Jinping proposed the initiative in 2013 as a new “Silk Road.” More than 70 countries are involved and, with China’s over $1 trillion investment, the project’s scope is huge. The “belt” refers to a transcontinental trade route linking China by land with the rest of Asia, Russia, and Europe, while the “road” is a sea route connecting China with South and Southeast Asia, the Middle East, Eastern Africa, and Europe.

The BRI faces mounting skepticism and criticism. Its track record has been uneven as problems have mounted. Problems include unsustainable borrowing, lack of oversight and transparency, heavy reliance on imported Chinese labor, corruption, high-interest rates, risk of cost inflation, and poor compliance with international environmental and labor standards. The Center for Global Governance has listed eight countries at risk of debt distress, including, among others, the Maldives, Djibouti, Pakistan, and Mongolia. Many developing countries have fallen into a debt trap — they accuse China of having engaged in predatory lending and they are unable to pay the money borrowed from China. Some of them, including Malaysia, Indonesia, Pakistan, the Maldives, and Myanmar, have revised the deals they originally signed.

To cite a few examples, Sri Lanka’s experience with borrowing heavily to build a new port resulted in its inability to repay the loans and the country was compelled to give a 99-year lease to a state-owned Chinese company to secure debt relief. Pakistan’s ongoing debt problems forced it to cut back the planned work on the China-Pakistan Economic Corridor, an ambitious $62 billion project. Similarly, Myanmar had to scale back a port deal its previous regime had signed, as did the Malaysian government by trimming a rail project by one-third to $11 billion. Two months ago, a Kenyan court halted the construction of a Chinese-backed power plant, ordering a new environmental impact assessment.

Two studies last month — one by the World Bank and the other by the Asia Society Policy Institute — recommended changes to ensure that the BRI is sustainable and results in beneficial economic, environmental, and social outcomes. Recommendations include: improve transparency and oversight, safeguard against corruption, and comply with international environmental and labor standards. China has indicated that it will undertake reforms for the BRI’s sustainability.

The rest of the world has taken notice. The United States is highly concerned with the security aspects of China’s focus on strategically sensitive ports and its development of a military base in Djibouti, and the U.S. Senate last year passed a bill to create an agency that would invest $60 billion in developing countries. The U.S. trade wars and the inward shift of U.S. foreign policy are among the reasons for China’s growing influence with developing countries.

Japan is investing a $200 billion “partnership to build infrastructure and promote connectivity across the region.” Last year, the European Union announced its own “connectivity strategy” to link Europe and Asia. And India has announced a policy to counter China’s growing influence in its backyard by improving connectivity and relationship with its neighbors to the East including ASEAN countries. It has also invested heavily in Afghanistan. India and Japan have joined hands to develop a container terminal at the Colombo port in collaboration with Sri Lanka.

Nevertheless, with China’s economy slowing down and a decline in its lending in the future, the BRI remains a work in progress.

Ved Nanda is Distinguished University Professor and Director of the Ved Nanda Center for International Law at the University of Denver Sturm College of Law. His column appears the last Sunday of each month and he welcomes comments at vnanda@law.du.edu.