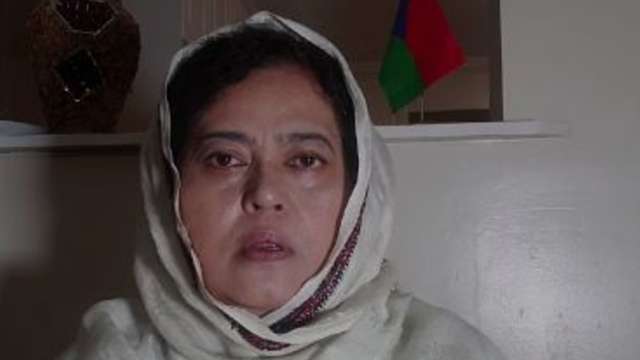 Naela Quadri, the President of the World Baloch Women's Forum

Naela Quadri, the President of the World Baloch Women's Forum, has urged the United Nations and the International community to support the Baloch people in their struggle for independence from Pakistan.

"Today we appeal to the international community, the United Nation and all the people who believe in peace and humanity to stand up and join hands with Baloch people," Quadri said in a video released on Pakistan's Independence day on Wednesday.

Quadri further condemned Pakistan for attempting to secure its foothold at the Gwadar port by carrying out construction projects in collaboration with China under the China-Pakistan Economic Corridor (CPEC).

"We tell you the state of Pakistan that with your new rule of Federal Port Authorities. You cannot rule the Baloch port... Baloch ports can not be yours by your this kind of Colonial rule... Baloch port belong to Baloch people and by making these rule you cannot touch our ports," said Quadri.

Balochistan was once an independent country like many others. On August 11, 1947, the province, which is currently under the dominance of Pakistan, gained independence from the British colonisers just three days before the creation of Pakistan.

The province, rich in natural gas fields, has also accused China of plundering their economic wealth especially after the construction of modern transportation networks, numerous energy projects, and special economic zones under the CPEC.

"You cannot control our port You can not enslave Baloch people We shall take out freedom One day there will be no 14 august Because your entity will be undone," she said.

Quadri reasoned that Pakistan is a landlocked country and the majority of ports belong to Baloch people and Sindhis.

"Pakistan has no port they are landlocked majority of ports belongs to Baloch people and Sindhis but with their new rule of federal port authorities they are trying to control the Baloch ports directly even they are not trusting their puppet government sitting in the province they have taken the authorities to control the ports belonged to Sindhis and Baloch people and they have taken it over directly under Islamabad. We condemn this," she said.

At a time when Islamabad has been urging the UN Security Council to take action over the Kashmir issue in the wake of changing the status of Jammu and Kashmir, it is worth mentioning that the human rights violations in Balochistan, the most volatile province in Pakistan, have drawn concerns of the international community and other human rights watchdogs.