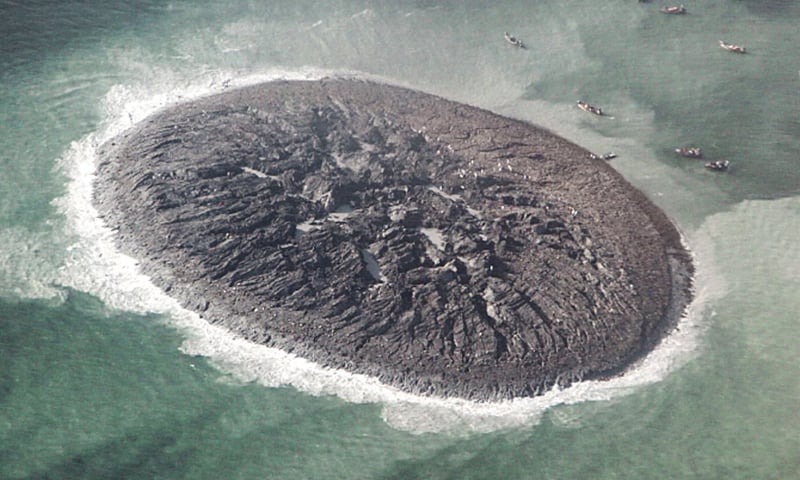 AN image of the island taken in September 2013.—Courtesy Live Science

KARACHI: A small mud island that emerged off the coast of Gwadar in 2013 following a massive earthquake hitting parts of Balochistan and Sindh has disappeared, images released by the US National Aeronautics and Space Administration (Nasa) show.

Zalzala Koh, the oval-shaped island which was 20-metres high, 90-metres wide and 40-metres long, was the product of a mud volcano triggered by a massive earthquake measuring 7.7 on the Richter scale.

“I have been following this island since 2013 and honestly, I did not expect that it would last that long. There could be multiple reasons for that. For example, the triggering force that threw the pile of sediments in 2013 has somehow kept the underwater mass in a reasonable state,” said Dr Asif Inam, a former director general of the National Institute of Oceanography (NIO).

According to Dr Inam, who heads the Bahria University’s maritime sciences department, said “It’s very likely that we see more islands in the vicinity in the time to come as islands produced by mud volcanoes have a history of coming and going in this region.”

In this respect, he referred to the devastating Makran earthquake in 1945 which completely destroyed the coastal towns in Pasni and Ormara and led to the emergence of four islands.

“This has been documented in detail by Dr V.P. Sondhi in the Geological Survey of India (published in 1947) and it’s surprising to note how similar in features those islands were to this one,” said Dr Inam.

Experts said that it’s the third time in 15 years that such a phenomenon had occurred along the Balochistan coast. Earlier, islands emerged in 1999 and in 2011 at a distance of two kilometres from the Makran coast near the point where the Hingol River drains into the sea.

Both islands emerged without an earthquake and collapsed due to strong currents and winds.

According to scientists, the Makran coastal belt is reported to have extensive reserves of frozen methane that exist in the form of gas hydrates (crystalline water-based solids physically resembling ice, formed under conditions of relatively high pressures and low temperatures) hundreds of metres below the sea floor. And whenever this highly pressurised gas finds a weak space to release some of its energy, a dome-like structure (island) is created within the waters or it emerges on the sea surface.

“It’s an active seismic region where three tectonic plates — Indian, Eurasian and Arabian — are converging. The space to release energy could be formed due to tectonic movements, creating some fractures and fissures in the strata.

“Sometimes, the structures do not come out of the water and so go unnoticed and could prove to be a major hazard for sea traffic,” Dr Inam explained.

He underscored the need for regular monitoring and mapping of the area in detail to ascertain the potentially hazardous parts (unnoticed structures) as well as to explore the possibility to overcome the energy crisis.

The analysis of previously tested gas samples showed that it contained methane, ethane, propane and butane.

The experts said that research activities in the particular area had been carried out in the recent past by the NIO and Pakistan Navy in collaboration with Chinese research institutions, but there was a need to do a lot more.