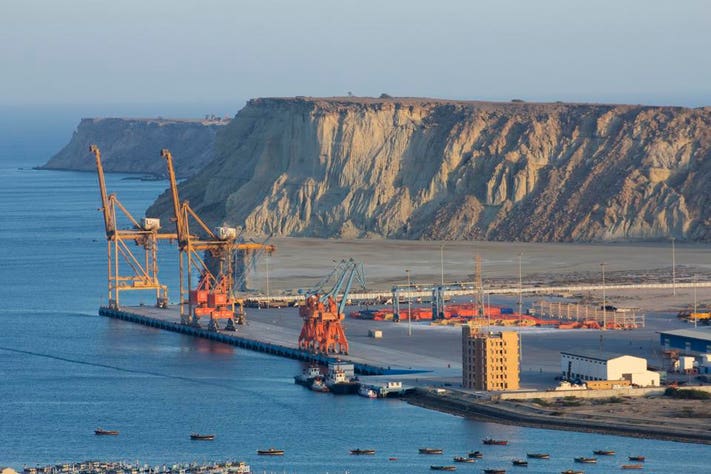 A $6 billion loan approved from the International Monetary Fund this week will ease Pakistan’s debt problems, for now. But it won’t stop China from turning the country into the next Sri Lanka.

China has been very close to Pakistan in recent years, for a couple of reasons. One of them is that Pakistan is a “natural” ally in Beijing’s long-time efforts to contain India.

The other reason is that Pakistan offers a “natural corridor” between western China and the Indian Ocean, and, therefore, an alternative route to Middle East oil supplies and the riches of Africa. 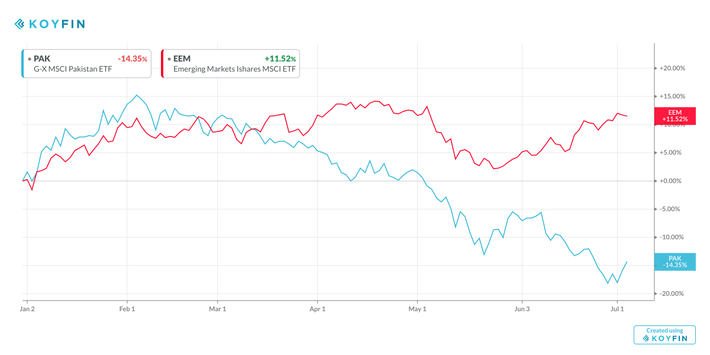 That’s why Beijing has been helping Pakistan build the China Pakistan Economic Corridor (CPEC), which stretches from Western China to the Indian Ocean.

While CPEC benefits China, this project benefits Pakistan too. It’s a big leap forward, as the country strives to transition from an emerging to a mature economy, creating a lot of jobs in the process.

But China’s involvement in the project hurts Pakistan, too. It adds to Pakistan’s corruption, since it involves state owned companies on both sides of the partnership. 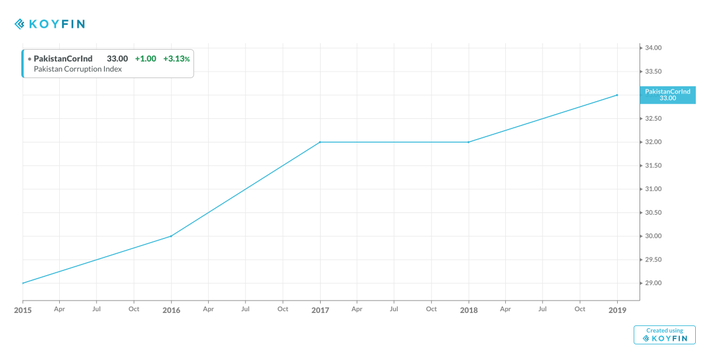 Meanwhile, corruption keeps pushing the costs of the project higher by the day.

And that makes Pakistan more indebted to China, which has been financing the project. In fact, Pakistan’s external debt took off shortly after CPEC was launched.

Growing indebtedness comes at a time when the country is already living beyond its means, as evidenced by persistent current account deficits, government debt, and external debt.

The trouble is that the CPEC project is far from over, and the costs of completing it keeps on rising.

And that makes it very likely that Pakistan will have to reschedule its debt several times before it’s over, and share the same fate with Sri Lanka — swapping debt with equity, which in essence will hand CPEC to Beijing.

Like CPEC, the Hambantota port construction began with loans from China. But when Sri Lanka could not repay the loans, Beijing converted these loans to equity, in essence turning Sri Lanka into a “semi-colony,” in a subtle way.

That’s what will eventually happen to Pakistan when China assumes ownership and control of CPEC, and collect tolls from vehicles that pass through. 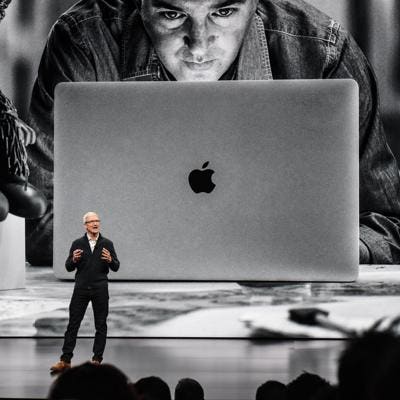 I’m Professor and Chair of the Department of Economics at LIU Post in New York. I also teach at Columbia University. I’ve published several articles in professional…Read More

A toddler dies on the border as reports of migrant children held in unsafe U.S. facilities spark demands for action to keep children safe. 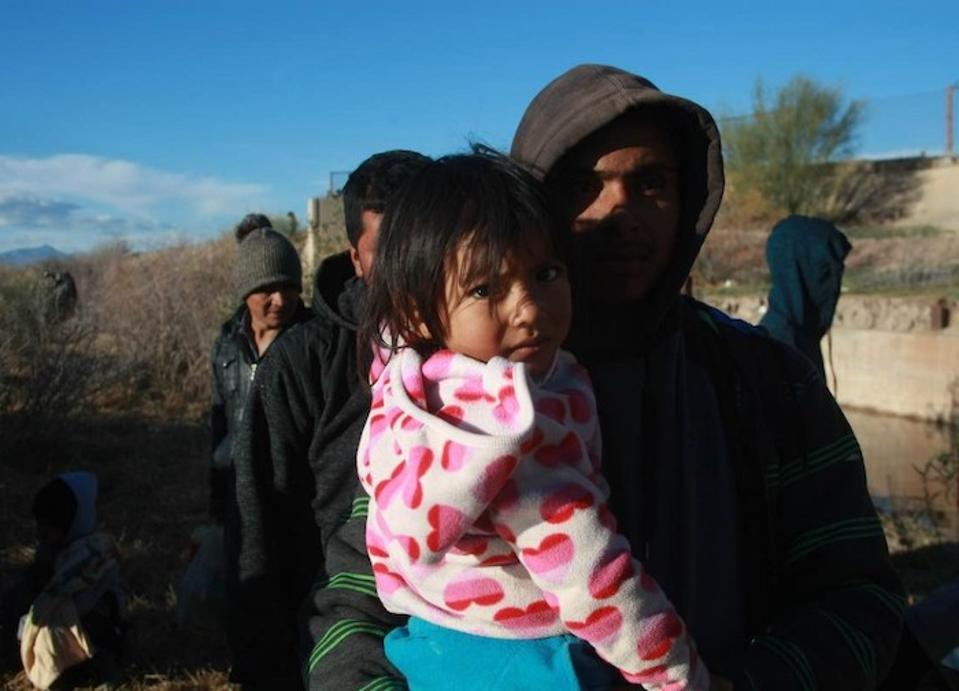 Many children like this little girl were among a group of 150 migrants fleeing extreme poverty in Central America who waited — without food — for three days at the border between Juarez and El Paso, Texas, last December in hopes of entering the U.S. © DAVID PEINADO/NURPHOTO VIA GETTY IMAGES

UNICEF and partners are working tirelessly all over the world to save and protect children.

The photo of Óscar Alberto Martínez Ramírez and his daughter, Valeria, drowned at the border between Mexico and the U.S., is a shattering reminder of the perils migrant families face while fleeing poverty and violence. It also evokes another heartbreaking image, the 2015 shot of the Syrian 3-year-old refugee Alan Kurdi, whose body washed up on a beach in Turkey after he drowned when the rubber boat he and his family boarded to cross to the Greek island Kos capsized.

Just as Alan’s death sparked vigorous debate over immigration policies in Europe, the photo of the bodies of Ramírez and his daughter, Valeria, demands solutions to the humanitarian crisis taking place at our southern borders and the suffering inflicted on children.

The photo’s release also coincides with national outrage over reports that emerged this week of migrant children now held in Government facilities at the U.S. southern border in dangerous and unhygienic conditions.

“Recent reports coming from some of these facilities are grim. Children should not be in unsafe environments that can cause toxic stress and irreparable harm to their health and development. This is a dire situation requiring urgent action and funding to provide children and families with essential services and support,” said Fore, who was just back from a trip to Tijuana, Mexico, where she met children and families from northern Central America at a migrant shelter.

"Children should not be in unsafe environments that can cause toxic stress and irreparable harm to their health and development."

“It’s hard to fathom this happening in a country with such a rich history as a champion for children in need around the world, particularly for those uprooted from their homes and communities by crisis. By any measure, these ARE children in need – I have met them.”

UNICEF is using its decades of humanitarian expertise to promote the protection of migrant children and their rights in their home countries or wherever their journeys take them.

In the U.S., UNICEF USA is working with such partners as the U.S. Conference of Catholic Bishops and the San Diego Rapid Response Network — headed by Jewish Family Service of San Diego — to help migrant children and families by supporting and expanding existing protection measures, including alternatives to detention, legal assistance, advocacy and the strengthening of the sponsor system. 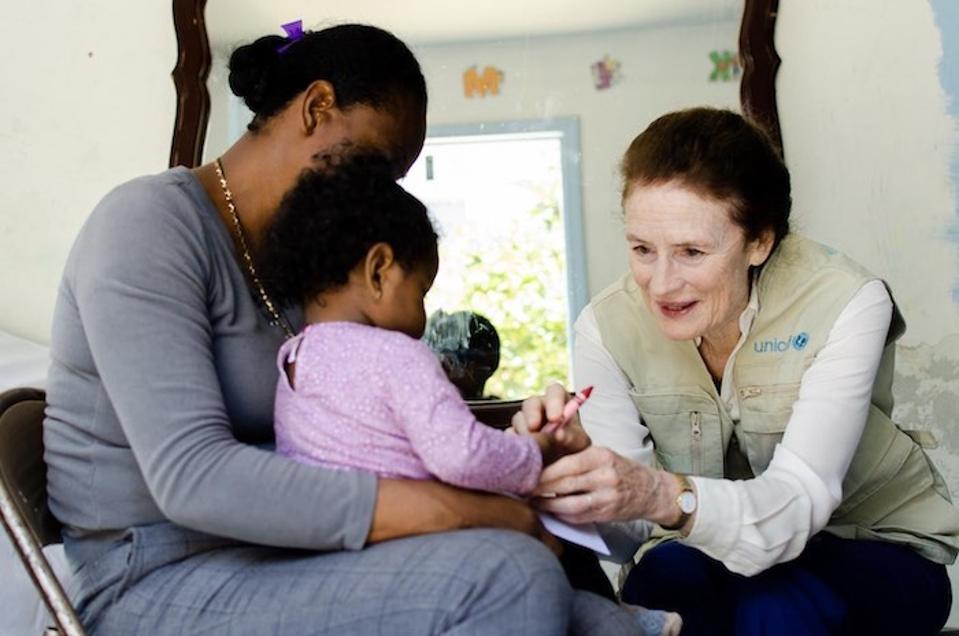 UNICEF Executive Director Henrietta Fore speaks with Nadia, whose name has been changed to protect her identity, and her 1-year old child in Tijuana, Mexico. © UNICEF/UN0321649/CARRILLO

To help alleviate the root causes of the crisis, UNICEF is also partnering with governments and civil society organizations in Central America and Mexico to protect children from violence, crime and other threats and to support their access to education and health programs.

None of the migrant children who Fore met on her trip to Tijuana wanted to leave their home countries. But, she says, “All felt they had no choice because of the threat of gang violence or oppressive poverty.”

Children who have fled violence or extreme deprivation at home or suffered harm along the migration route can ill afford to experience further trauma.

UNICEF supports migrant children wherever they may be, but, says Fore, countries of origin, transit and destination must also act to ensure the rights, protection, wellbeing and dignity of migrant and refugee children.

“No one country can do it alone,” she says. “Addressing the root causes of forced migration and the needs of uprooted children require serious commitment, resolve and resources.”

For over 70 years, UNICEF has been putting children first, working to protect their rights and provide the assistance and services they need to survive and thrive. With a presence in 190 countries and territories, UNICEF has helped save more children’s lives than any other humanitarian organization in the world.