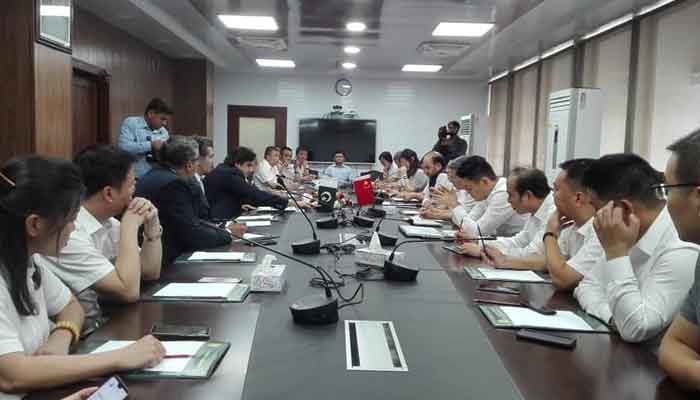 ISLAMABAD: Chinese businessmen on Thursday expressed desire to invest around one billion dollars in Pakistan as China’s funded economic corridor projects entered into their second phase with focus on industrial and agriculture cooperation and Gwadar development. The 50-member business delegation apprised Minister for Planning, Development and Reform Khusro Bakhtyar of its investment plan during a meeting. They are keen to invest in various sectors, including automotive, textile, agriculture-related, information technology and telecom industries. Bakhtyar said the ministry of planning would facilitate investment to further the economic cooperation between the two countries.

“The government is focusing on promoting export-led industry and import substitution for sustained economic growth,” an official statement quoted the planning minister as saying. “China can help increase Pakistan’s exports by relocating export-oriented industries and initiating joint ventures in various fields. This will boost industrial cooperation besides strengthening bilateral economic partnership between the two countries.”

China initiated $62 billion worth of infrastructure and energy projects in Pakistan as part of its Belt and Road Initiative.

The minister said the country offers liberal investment policies to attract foreign investment in different areas. “Private sector of both the countries should forge partnerships for mutual economic benefit of the two countries,” he said. “There are investment opportunities in various sectors such as maritime, iron and steel, petrochemical, agro-based industries, tourism, energy, minerals and mines and textiles.”

Bakhtyar further said establishment of industrial zones has the potential to revive the country’s industrial sector. “It will also create job opportunities besides developing local industries.”

Pan Guangfeng, head of the Chinese delegation acknowledged the significance of Pakistan’s strategic location and the immense investment opportunities in the country. Guangfeng said the city of Chongqing is side by side with One-Belt-One-Road and a centre of heavy industrial activity in central China, especially the automotive and electronics industries of the region along with 37 industrial parks. The delegation head said the investors could raise $300 to 500 million for special economic zone (SEZ) infrastructure development with an umbrella investment of $1 billion in several sectors. He hoped that Chinese investment in Pakistan would help to create 500,000 direct jobs for local youths in addition to transfer technology and raise industries’ tech standards in Pakistan.

Members of the visiting delegation, comprising of chief executives and general managers of businesses from the City of Chongqing, have experience in developing economic zones and expressed their intention to facilitate in the development of SEZs. They highlighted the potential role of Belt and Road Initiative in contributing to the economic and social development of Pakistan and further explored the avenues of collaboration in technological innovation and up-gradation, job creation, ecommerce, and development of human resource capabilities through industrial cooperation between China and Pakistan.