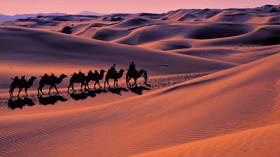 China’s trade with countries participating in its ambitious Belt and Road Initiative (BRI) has been expanding and reached 4.24 trillion yuan ($617.5 billion) in the first half of this year.

Customs data showed trade with BRI countries for the period was up 9.7 percent year-on-year. It has outpaced the growth rate of China’s total trade, which remained stable at 3.9 percent.

Exports and imports with Russia, Saudi Arabia and Egypt were up by 11.5 percent, 34 percent, and 11 percent respectively.

ALSO ON RT.COMBelt and Road to boost China’s growth over next four decades

Dubbed the 21st century Silk Road project, the BRI was announced by Chinese President Xi Jinping six years ago. Since then, Beijing has signed 173 agreements with 125 countries, including developed and developing countries, and 29 international organizations.

The multi-trillion-dollar initiative aims to boost connectivity and cooperation between Asia, Europe, Africa and Latin America. Experts say it will significantly boost global commerce, cutting trading costs by half for the countries involved.