Welcome to the second issue of the new SupChina Weekly Briefing.

To give us feedback — and please don’t hesitate to throw rotten tomatoes, or tell us what you love — write to theweekly@supchina.com. 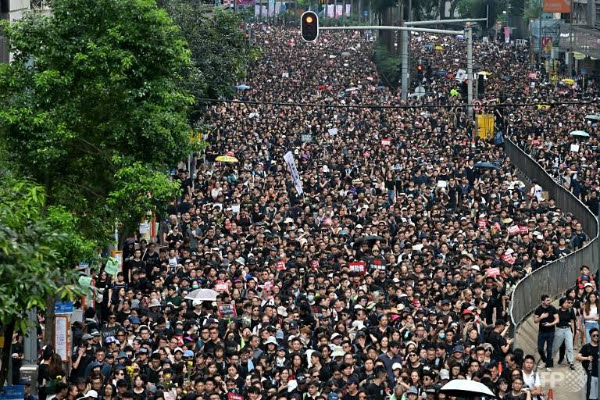 For the third time in a week, enormous numbers of people in Hong Kong took to the streets on June 16 to demand government accountability to their voices and the permanent cancellation of a controversial extradition bill.

As many as TWO MILLION attended, organizers said. Given the way people spilled out onto and filled multiple parallel streets (last week’s protests were mostly confined to one thoroughfare), the number seems reasonable.That makes this the largest protest in Hong Kong history, and a stunningly large demonstration by percentage of population: About 25 percent of the city protested on one day — Hong Kong has 7.5 million residents.The extradition bill that the people feared would fracture Hong Kong’s independent judiciary and give Beijing the ability to scoop up dissidents in the city has been shelved, for now. The city’s chief executive, Carrie Lam (林鄭月娥 Lín Zhèng Yuè'é), has given a public apology. But the protesters have clear and specific further demands, for example:“Withdraw the extradition bill. Carrie Lam step down. Drop all political prosecutions!” is what Joshua Wong (黃之鋒 Huáng Zhīfēng), the famous student protester, tweeted as he left prison the day after the protests. (Wong is one of several leaders of the 2014 Occupy protests to be sent to jail for “unlawful assembly” back in 2017.)

WHAT DOES IT MEAN? WHAT’S NEXT?

The protests are a major embarrassment, not only for Hong Kong leader Carrie Lam but also for Chinese President Xí Jìnpíng 习近平, who leads the government that has failed to convince Hong Kongers to trust it more in the years since the 1997 handover of sovereignty from Britain.The whole affair is sending a stench across the South China Sea to Taiwan, where the idea of a Hong Kong-style “one country, two systems” formula for the eventual unification with Beijing has been viewed with skepticism all along. Taiwan’s President Tsai Ing-wen (蔡英文 Cài Yīngwén) has long said, “As long as I’m President, ‘one country, two systems’ will never be an option,” but now even China-friendly opposition politicians like Han Kuo-yu (韓國瑜 Hán Guóyú) are saying that unification won’t happen unless “over my dead body.”Many observers see the government’s retreat as a victory for the people of Hong Kong, and a symbol of hope that people power can force accountability on Beijing.But the official media in mainland China — in the few cases where the demonstrations in Hong Kong are even mentioned — is blaming the protests on the CIA and other foreign agents, and characterizing them as violent events that most Hong Kongers do not support. 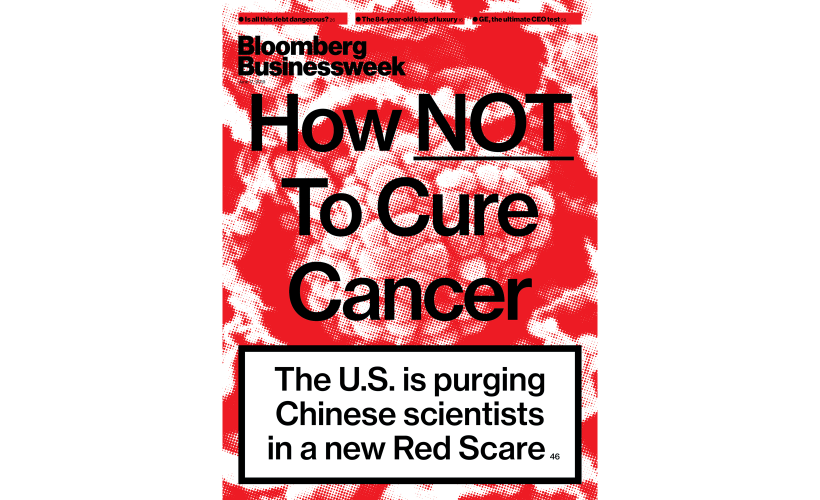 The most recent cover story in Bloomberg Businessweek exposes how a dangerous new era of McCarthyism is dawning in the United States. From the article (porous paywall):

Cancer researcher Wú Xīfèng 吴息凤 is a naturalized American citizen and award-winning epidemiologist, who until earlier this year was director of the Center for Public Health and Translational Genomics at the University of Texas MD Anderson Cancer Center.She stepped down in January after a three-month FBI investigation into her ties to China, where she has sought out researchers and research institutions for collaboration in curing a disease that kills about 10 million a year.“Wu hasn’t been charged with stealing anyone’s ideas, but in effect she stood accused of secretly aiding and abetting cancer research in China, an un-American activity in today’s political climate.”“Her resignation, and the departures in recent months of three other top Chinese American scientists from Houston-based MD Anderson, stem from a Trump administration drive to counter Chinese influence at U.S. research institutions. The aim is to stanch China’s well-documented and costly theft of U.S. innovation and know-how. The collateral effect, however, is to stymie basic science, the foundational research that underlies new medical treatments.”

The increasingly cold war-esque atmosphere between the United States and China parallels, but will continue to develop independently of, the trade war. Tit-for-tat tariffs are now nearing their one-year anniversary — SupChina counted July 6, 2018 as day one.

Here’s the latest on the prospects for tariffs decreasing or — more likely — increasing:

The U.S. Trade Representative held hearings today on the next round of 25 percent tariffs on $300 billion worth of Chinese imports, the Wall Street Journal reports (paywall).Trump has previously said that he would wait until after a prospective meeting with Xi Jinping at the G20 meeting in Japan on June 28–29 to decide on more tariffs. But Tariff Man has also said that if Xi does not meet with him, those tariffs would go into effect right away.Vice President Mike Pence has delayed a speech criticizing China’s human rights record because Trump worries that such criticism would scare off Xi, according to Bloomberg (porous paywall).

3. Transsion — the other Huawei — has never sold a phone in China 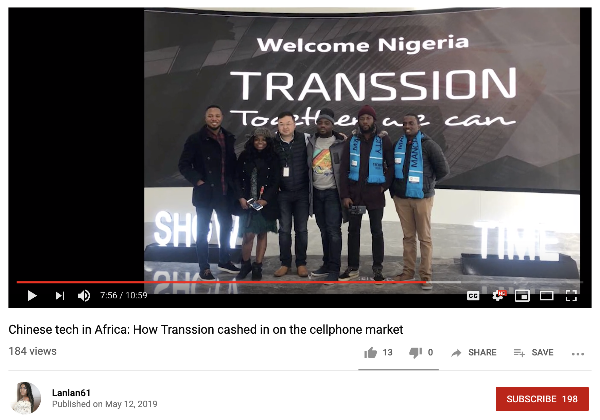 Screenshot from a little-noticed but very worth watching video on Transsion.

With all the hubbub about Huawei in the news recently, it can be easy to overlook the fact that many other Chinese technology companies have managed to successfully globalize and avoid controversy, all while creating genuinely innovative products that fill market needs.

One such company is Transsion, a Chinese mobile phone manufacturer that has remarkably never sold a phone in China. Instead, it has specialized on the African market, creating cost-effective handsets that have become a favorite brand on the continent. Beijing-based video blogger Lanlan61 explains in this 10-minute YouTube episode.

In other interesting Chinese technology analysis:

Mary Meeker, the financier famous for her highly respected Internet Report, which has been published annually since 1995, has released the 2019 edition. China plays a big role. Radii China has summarized the key China points, which include:

Meituan and Pinduoduo are specifically noted as non-U.S. innovators.“Direct financial services” such as mobile payments and digital wealth management products are being pioneered in China.VIPKid, which connects American English teachers to students in China online, is held up as an example of educational trends.Short videos are driving internet usage in China.TechCrunch also has a post summarizing the China sections of Meeker’s report. 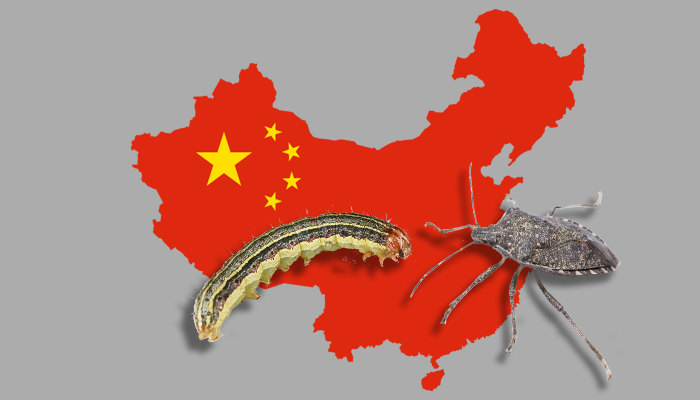 Last month, the Beijing News reported (in Chinese) that a “local pest disaster” of fall armyworms — the larvae of Spodoptera frugiperda — had fallen on 11 provinces in China. Since January, the armyworms have been munching on important crops such as corn, soybeans, and rice across thousands of hectares of farmland.

Last week, Bloomberg reported (link via SCMP) that researchers at the Chinese Academy of Agricultural Sciences (CAAS) had come up with an unexpected yet simple solution:

Stink bugs. Millions of them.“The stink bug’s killing powers are impressive. A mature nymph can exterminate as many as 41 fall armyworm larvae a day by anaesthetising and paralysing the pest, and sucking out body fluid causing fatal damage to internal organs, Chinese scientists found during a field trial in the southwestern province of Yunnan.”The CAAS has “set up a ‘factory’ that can breed 10 million stink bugs a year to sustainably manage the pest without heavy reliance on pesticides.”

The radical plan to fight crop-eating pests is being launched at the same time that China battles the still incurable African swine fever (ASF) that is ravaging its hog farms.

Already, over one million pigs have been culled to stop the spread of the disease, but industry experts expect that the fight is far from over.Armyworms and ASF are combining to inflate food prices dramatically — in April, for example, food prices rose 6.1% year-on-year, Caixin reported.

The bottom line: Food security is a perennial challenge for China. The Center for Strategic and International Studies notes that China ranks 40th out of 113 countries in the Global Food Security Index. The list of famines in Chinese history is not short — China’s amount of arable land per head has always been on the lower end in comparison to other countries. And according to the UN-affiliated World Food Programme, despite dramatic reductions in poverty in recent decades, about 150 million people remain malnourished in the People’s Republic. 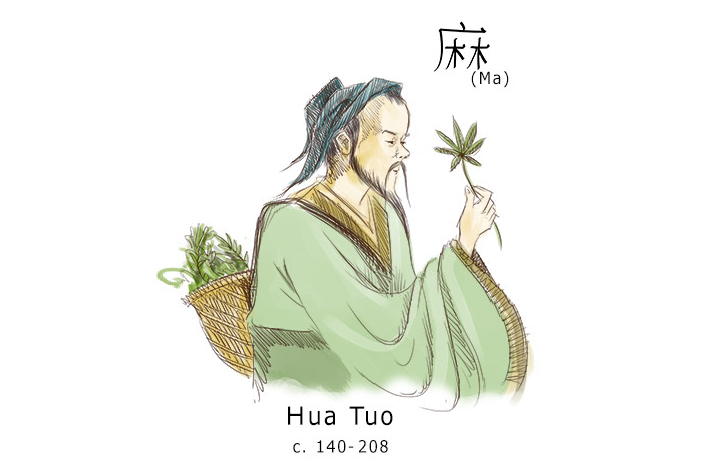 Archaeologists have unearthed the earliest direct evidence of people smoking marijuana from a 2,500-year-old graveyard in western China.

In a complex of lofty tombs in the Pamir Mountains — a region near the borders of modern China, Pakistan and Tajikistan — excavators found 10 wooden bowls and several stones containing burnt residue of the cannabis plant. Scientists believe heated stones were used to burn the marijuana and people then inhaled the smoke as part of a burial ritual.

“It’s the earliest strong evidence of people getting high” on marijuana, said Mark Merlin, a botanist at the University of Hawaii.

Digging deeper, we learned that Huá Tuó 華佗, an ancient Chinese physician and medical pioneer (pictured above), was the first person in China to use anesthesia. Many scholars believe that his formula was based on cannabis!