Note,: Not a single word about IMF 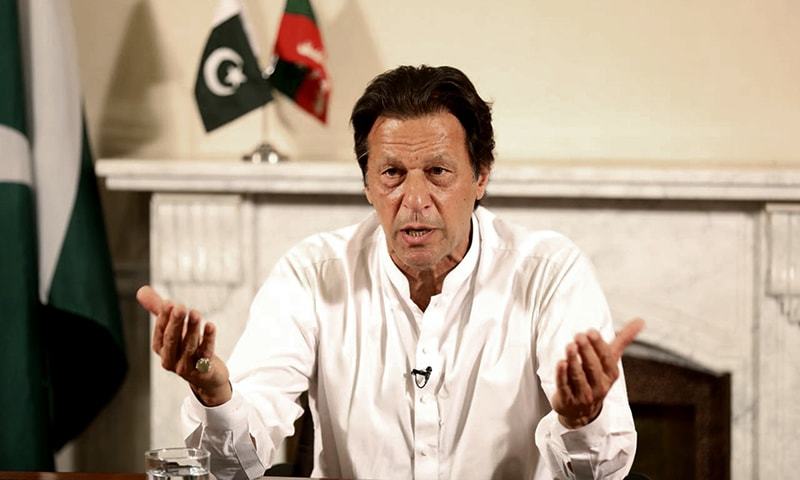 File photo of Imran Khan delivering his address to the nation in Islamabad. — Tehreek-e-Insaf via AP

Prime Minister Imran Khan revealed on Twitter late Tuesday that the military has agreed to slash the defence budget for the next fiscal year in line with broader austerity measures being introduced by the government.

The premier noted that these cuts were agreed to despite "multiple security challenges".

He further stated that the money saved would be diverted to aid the development of the merged tribal areas and Balochistan.

I appreciate Pak Mil's unprecedented voluntary initiative of stringent cuts in their defence expenditures for next FY bec of our critical financial situation, despite multiple security challenges. My govt will spend this money saved on dev of merged tribal areas & Balochistan.

8,712 people are talking about this

Inter-Services Public Relations, the military's media wing, stated in a later tweet that the cuts "will not be at the cost of of defense and security", and that it was important for the military to participate in the rebuilding of Balochistan and the erstwhile tribal areas.

Director General of ISPR Maj Gen Asif Ghafoor further stated that the slashes would be managed "internally" by all three branches of the armed forces taking into account strategic compulsions.

Voluntary cut in def budget for a year will not be at the cost of def & security. We shall maint effective response potential to all threats.Three services will manage impact of the cut through appropriate internal measures. It was imp to participate in dev of tribal areas & Bln.

8,110 people are talking about this

Earlier in February, the government had decided not to make any cuts in the country’s defence budget for the ongoing year.

“The country’s defence budget is already low as compared to other states in the region, and therefore it should be increased,” the then information minister, Fawad Chaudhry, had said.

Last month, however, the government had announ­ced that all civil and military institutions would contribute to the austerity-oriented federal budget for 2019-20.

“There will be austerity in the coming budget. We will try to keep government expenditures to the minimum possible level,” Prime Minister’s Adviser on Finance and Economic Affairs Dr Hafeez Shaikh had said. “God willing we will all stand together on this, whether it is civilian or army [institutions] or the private sector.”

Placed in a difficult neighbourhood, it was the most important thing for a sovereign country like Pakistan to protect its people and borders and to give whatever sacrifice was possible, Shaikh had said, adding: "Nevertheless, we are all on the same page whether these are civilians or armed forces that there should be serious, sustained and structured reforms through difficult decisions and all would participate in this effort and you would see this in the new budget”.

Pakistan was 2018's 20th biggest military spender in the world with an expenditure of $11.4 billion, a report published by the Stockholm International Peace Research Institute (Sipri) said in April.

The military spending of 2018 made up for four per cent of Pakistan's gross domestic product (GDP) which is the highest level since 2004, according to the report by the Sweden-based institute.

The top military spender in the world is the United States, which spent $649bn on its forces last year. The US military spending, however, has decreased by 17pc over the past decade, the report said.

According to the report, India's military spending, which rose by 3.1pc between 2017-18, was "largely motivated by tensions and rivalry with Pakistan and China".

Despite the increase from last year, India's military burden was the lowest since the 1960s and made up for 2.4pc of its GDP.