India sending warships to the Middle East to protect shipping

(CNN) — The Indian Navy is sending two warships to the Gulf of Oman to protect the country's shipping in the wake of a series of attacks on tankers there in the past six weeks.

The guided-missile destroyer INS Chennai and the patrol vessel INS Sunayna "have been deployed in the Gulf of Oman and Persian Gulf to undertake maritime security operations," an Indian Navy statement said.

Surveillance aircraft are also being dispatched in what India is calling Operation Sankalp.

India announced the operation Friday, one day after Iran said it shot down a US spy droneover the Gulf of Oman. 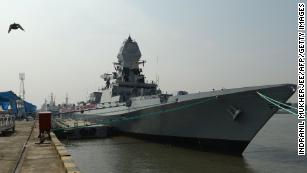 The Indian guided-missile destroyer INS Chennai is shown ahead of its commissioning into the Indian Navy in Mumbai on November 18, 2016. The ship is heading to the Gulf of Oman to help protect Indian shipping from the attacks that have been happening there.

The US and Iran differ on whether the drone was in Iranian or international airspace, but the incident has inflamed an already tense situation that has seen six civilian ships damaged in the past six weeks.

The US has blamed Iran for those attacks and has released video of what it claims are Iranian military personnel removing an unexploded mine from one of the ships that was attacked.

Two tankers were damaged by what the US Navy said are mines in the Gulf of Oman on June 13, and four others were damaged in attacks off the coast of the United Arab Emirates on May 12.

None of the ships damaged in the attack were Indian-flagged, but warnings to mariners in the Middle East have said ships of all flags should be wary. The ships that have been hit do not seem to have anything in common other than location when they were attacked.

INS Chennai, a 7,500-ton, 534-foot-long guided-missile destroyer, is one of the newest and most powerful ships in the Indian Navy. Commissioned in 2106, it carries surface-to-surface and surface-to-air missiles as well as rocket launchers and torpedoes, the Indian Navy says.

The 2,200-ton INS Sunayna is also one of the countries newer ships -- entering the fleet in 2013 -- and is designed for offshore patrol and escort activities.

The India release did not give a location of the ships or say exactly when they would arrive in the Gulf of Oman.

The US has also increased its forces in the Middle East amid tensions with Iran. Earlier this week Washington announced it would add 1,000 troops to the thousands already in the region.