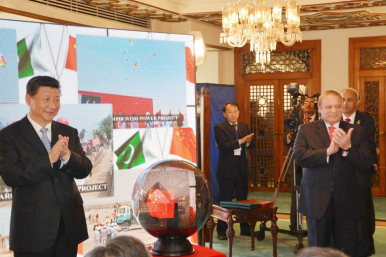 CPEC has great promise, but Pakistan must be clear-eyed about the environmental and political costs.

Pakistan’s energy crisis is a key factor hampering its economic growth. The public bears the brunt of this chronic shortfall, which is caused by several factors. Nothing has worked so far to find a permanent fix to this crisis, so the Pakistani government and the public have welcomed China’s recent intervention.

Beijing is interested in making substantial investments in the country’s energy sector under the China-Pakistan Economic Corridor (CPEC). CPEC is a part of China’s ambitious Belt and Road Initiative, which aims to connect Europe, Africa, and the rest with China to increase trade and growth.

CPEC promises a number of infrastructure projects of various kinds — roads, highways, bridges, and energy projects — across Pakistan to facilitate trade and connectivity between the two nations. It will also connect China’s western province of Xinjiang to the Indian Ocean through the port of Gwadar in Pakistan’s Balochistan province. However, the bulk of CPEC investments – about $35 billion – will go to energy projects, including solar, coal, hydropower, and natural gas. According to official estimates, 21 new projects will generate nearly 17,000 megawatts of energy. Under CPEC, 17 energy projects have been finalized to date and four more are under consideration.

While this massive multi-pronged investment is a great relief, Pakistan must approach it with great caution.

Pakistan should look to China for assistance as an equal partner, but it should not give China a monopoly over its energy sector. There are already concerns that due to CPEC, Chinese firms are benefiting more than their Pakistani counterparts.

In January 2018, Dawn reported that Pakistani firms have been denied contracts for power and other projects. They quoted a senior government advisor who said even equipment and raw materials for the projects were being imported from China.

“Labor is also coming from China. There are no restrictions on Chinese firms to involve Pakistani contractors and use local equipment and labor as they take the lion’s share of infrastructure projects,” the official complained.

Geopolitical issues in Pakistan are another concern, as turmoil in Balochistan poses a constant threat to peace and stability. A recent attack on Chinese investors at the Pearl Continental Hotel in Gwadar demonstrated the seriousness of this threat. The Baloch insurgents often target energy infrastructure projects, such as gas pipelines and electricity towers, because they see China as an imperial force that, along with the Pakistan government, wants to plunder Balochistan’s resources. Minimizing violence directed toward infrastructure is vital for the success of CPEC.

Pakistan’s energy sector has been in a perpetual state of crisis for several years. Electricity outages last from 6-8 hours at a time and occur daily throughout the country. These blackouts cost the economy $18 billion in 2015 alone. Pakistan currently produces an average of 25,000 megawatts (MW) and during peak seasons it has an average electricity shortage of up to 7,000 MW, mainly due to inefficient and outdated power plants and infrastructure. To deal with this shortage, industries and households are forced to use diesel electric generators to meet their daily energy demands.

According to Safiya Aftab of the Norwegian Peacebuilding Resource Center, the current crisis started around25 years ago when the country moved its energy production from hydropower to imported furnace oil. Consequently, the cost of power generation increased, while corruption and mismanagement in the energy sector let bills from households slip. This, in return, triggered delayed payments for imported furnace oil, natural gas, and other sources. To remedy this, the government applied for loans to finance the unprofitable energy industry, thus plunging it into a never-ending cycle of debt. For every 100 units of electricity that power plants generate, they only get paid for 30.

World Bank data shows 99 percent of Pakistanis had access to electricity in 2016. However, poor management made it difficult to attract investments in manufacturing and the service sector.

China’s record of meeting its own electricity demands, coupled with its rapid economic growth, demonstrates that it has the potential to pull Pakistan out of its energy crisis. According to the International Energy Agency (IEA), China’s energy consumption was at a mere 131 million tonnes oil equivalent (Mtoe) in 1965. But with an increasing GDP, it had to meet higher and higher demand, and by 2015, China was consuming 3,000 Mtoe. However, most of their energy production has been fueled by coal, despite China’s commitment to becoming a global leader in renewable energy by 2030 and a reduction in the share of coal in energy consumption from 87.1 percent in 1965 to 63.7 percent by 2015.

China is the world’s largest carbon dixoide emitter. Considering how hard chronic air pollution has hit Beijing and several major Chinese cities, developing countries should be cautious in taking the same path. As Pakistan grapples with climate change as one of the countries being hit hardest by global warming, it should consider how coal plants will affect its cities in the long term. Last winter, Lahore ranked as one of the most polluted cities in the world with the worst air smog ever recorded in the country.

While solving its energy needs is a priority, Pakistan should work on renewable energy projects and look for viable solutions to meet its demands. Currently, renewable energy productionstands at one-third of total energy generation, stemming mostly from large hydropower plants in the north. The share of renewable energy from solar power only stands at a meager four percent of the total share of energy being produced in the country. The International Renewable Energy Agency estimates 50 GW of theoretical wind potential in the southern provinces of Sindh and Balochistan, but this potential remains largely untapped.

Pakistan should solve its energy problems while, at the same time, making it a priority to keep the environment clean. Luckily, there has been some headway on that front.

The Future of Energy

To be a leader in the renewable energy industry, Pakistan should follow the Indian experience, where the government established a chain of outstanding Indian Institutes of Technology (IITs). These institutions helped India foresee the future and produce brilliant graduates in relevant fields.

Pakistan must embark on a similar process. This needs consistency and a vision for the future on the part of the country’s leadership. The government should commit to a long-term plan to exploit this industry of the future. It can take advantage of Chinese support and technical assistance, but the attainment of self-reliance must be its ultimate goal.

With its potential in solar and wind power and a massive youth population, Pakistan can become a major powerhouse and a beacon of hope for other developing countries in the world in the fight against climate change. Maybe that’s the Naya Pakistan (New Pakistan) Prime Minister Imran Khan should promise to the nation.

Sheraz Aziz, currently based in Washington, DC, is a Karachi-born engineer who has studied and worked in the renewable energy industry in China.