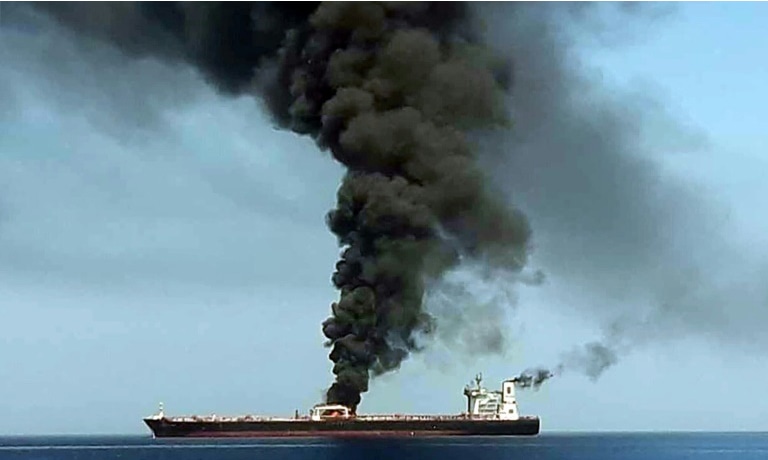 A picture from Iranian State TV IRIB on June 13 reportedly shows smoke billowing from a tanker said to have been attacked off the coast of Oman. — AFP

Two oil tankers were hit in suspected attacks in the Gulf of Oman and the crews have been evacuated, shipping firms and industry sources said on Thursday, a month after a similar incident in which four tankers in the region were struck.

One of the tankers, the Front Altair, carrying a cargo of petrochemical feedstock, was ablaze in waters between Gulf Arab states and Iran.

Iran's state news agency said it had sunk, although the Norwegian owner had said it was afloat and its crew were safe. The other tanker was adrift without any crew.

The Bahrain-based United States Navy Fifth Fleet said it was assisting the tankers after receiving distress calls. The United Kingdom Maritime Trade Operations, part of Britain's Royal Navy, said it was investigating with its partners.

Details of the incident were not immediately clear, but one operator said it suspected its ship had been hit by a torpedo. Another shipping firm said its vessel was on fire in the Gulf of Oman.

Oil prices surged by 4per cent after the report that has stoked tensions in the region that have already been heightened by attacks last month on Gulf oil assets amid a dispute between Iran and the US over Tehran's nuclear programme.

The Gulf of Oman lies at the entrance to the Strait of Hormuz, a major strategic waterway through which a fifth of global oil consumption passes from Middle East producers.

There was no immediate confirmation from authorities in Oman or the United Arab Emirates (UAE), in whose territorial waters four tankers were hit last month. An investigation said limpet mines were used. The US and Saudi officials blamed Iran for the May attack, a charge Tehran has denied.

Saudi Arabia and the UAE said the attacks on oil assets in the Gulf posed a risk to global oil supplies and regional security.

On Thursday Bernhard Schulte Shipmanagement said tanker Kokuka Courageous was damaged in a “suspected attack” that breached the hull above the water line while on passage from Saudi Arabia to Singapore.

“The ship is safely afloat,” it said in a statement.

Taiwan's CPC said tanker Front Altair, carrying 75,000 tonnes of Naptha was “suspected of being hit by a torpedo” around 0400GMT. The vessel, owned by Norway's Frontline , had loaded naphtha, a petrochemical feedstock, from Ruwais in the UAE, according to trade sources and shipping date on Refinitiv Eikon.

Frontline said its vessel was on fire in the Gulf of Oman.

Refinitiv Eikon ship tracking data showed the Front Altair, an Aframax vessel, was in waters between Oman and Iran, carrying its naphtha cargo for delivery in Taiwan this month.

The sources said crews from both vessels, which they had said had been struck in international waters, had been safely evacuated.

One shipping broker said there had been an explosion “suspected from an outside attack” that may have involved a magnetic mine on the Kokuka.

“All crew safely abandoned the vessel and was picked up by Vessel Coastal Ace. Kokuka Courageous is adrift without any crew on board," the source said.

Another source said the Front Altair reported a fire caused by a “surface attack” and that the crew had been picked up by nearby vessel Hyundai Dubai.

Iran's Foreign Minister Javad Zarif pointed out in a tweet that the reports of attacks had emerged as Japanese Prime Minister Shinzo Abe was meeting Supreme Leader Ayatollah Ali Khamenei and said: "Suspicious doesn't begin to describe what likely transpired this morning."

Meanwhile, Iran's news agency Farsreported that a government spokesperson voiced concern over the reports of attacks on the tankers and said that the country is ready for regional security cooperation to protect strategic waterways.

The UK government also said on Thursday that it was deeply concerned by reports of explosions and fires on vessels in the Strait of Hormuz.

“We are deeply concerned by reports of explosions and fires on vessels in the Strait of Hormuz. We are in contact with local authorities and partners in the region,” a British government spokeswoman said.