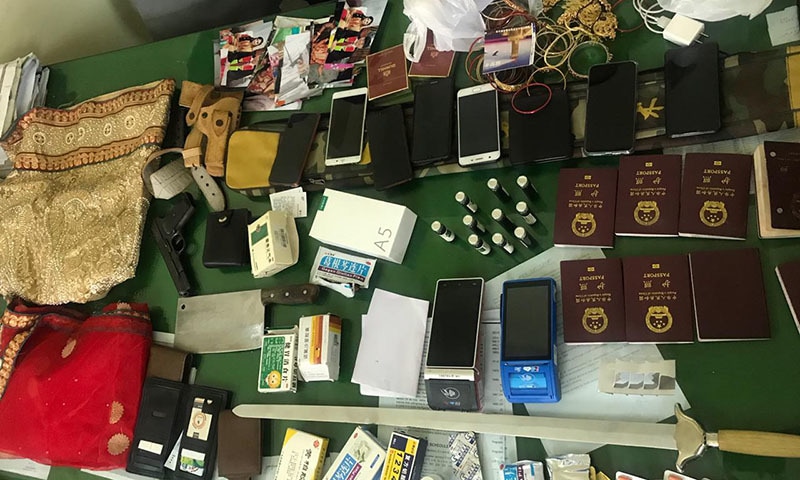 At least one hand gun, a meat cleaver and a sword can be seen among the things confiscated during the raids conducted on Wednesday. — Photo by author

Federal Investigation Agency's (FIA) Anti-Human Trafficking Cell on Wednesday recovered three Pakistani girls and arrested another 14 Chinese nationals in continuation of its crackdown on the gangs involved in fake marriages with Pakistani girls for trafficking them to China allegedly for organ removal and sexual exploitation.

According to well-informed sources within the FIA, the arrests and recoveries were made during raids conducted in Islamabad and Rawalpindi.

The suspects wanted to smuggle the girls abroad under the pretense of marriages, the sources said, adding that for the first time weapons were also recovered from the Chinese nationals.

The FIA sources further said that the detained suspects were being transferred to the agency headquarters, where they expect to extract more information from them during investigation.

The arrests today add to the approximately 17 Chinese nationals arrested over the span of a week in separate raids in the capital, Lahore and Faisalabad amid reports that over 90 Pakistani women, many of them belonging to less privileged Christian families, have already been trafficked after being trapped into fake marriages.

As the sex and human trafficking scam came to light, federal Interior Minister retired Brig Ijaz Ahmad Shah had taken notice of the issue directing the officials to engage ambassadors and government officials in the matter while chairman of the Senate standing committee on interior Rehman A. Malik sought a detailed report from relevant officials on the issue within the next three days.

The series of arrests come a week after Human Rights Watch said Pakistan should be alarmed by recent reports of trafficking of women and girls to China. It said the allegations were disturbingly similar to the pattern of trafficking of "brides" to China from at least five other Asian countries.

The Chinese embassy in Islamabad has also raised the alarm over illegal, cross-border matchmaking services that are often a front for human trafficking. Last month, it issued a statement condemning reports of the existence of bureaus orchestrating illegal marriages. "China is working together with the Pakistani government and law enforcement agencies to track these illegal marriage centres," the statement said.