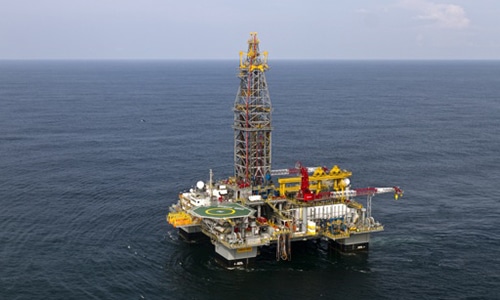 The cost of offshore drilling at Kekra-1 site was estimated at Rs15bn, according to an official of the Petroleum Division. — AFP/File

Offshore drilling at the Kekra-1 site near Karachi has found no reserves of oil and gas, according to an official of the Petroleum Division.

Hours after Prime Minister Imran Khan reiterated that there is a chance of discovering "massive reserves at the site by next week", the Petroleum Division said that the drill did not yield the desired results.

"ExxonMobil, ENI, PPL and OGDC were conducting the drill at Kekra-1. More than 5,500-metre-deep drilling was conducted but oil and gas reserves were not found. The drilling work has now been abandoned," an official told DawnNewsTV.

"The cost of the drill was estimated at Rs15 billion," he added.

Special Assistant to the Prime Minister (SAPM) on petroleum division, Nadeem Babar, also confirmed to Geo News that the search did not find any reserves.

The development came after Prime Minister Imran on multiple occasions fuelled the hopes of Pakistan "hitting an oil and gas jackpot" — the latest of which came earlier today during his speech at a fundraising event in Peshawar for the Shaukat Khanum Memorial Cancer Hospital and Research Centre.

"A well is being dug near Karachi, and it seems that we would know within one week ... and it is possible that we could find such a massive gas reserve that Pakistan would never have to purchase gas from outside," the premier said.